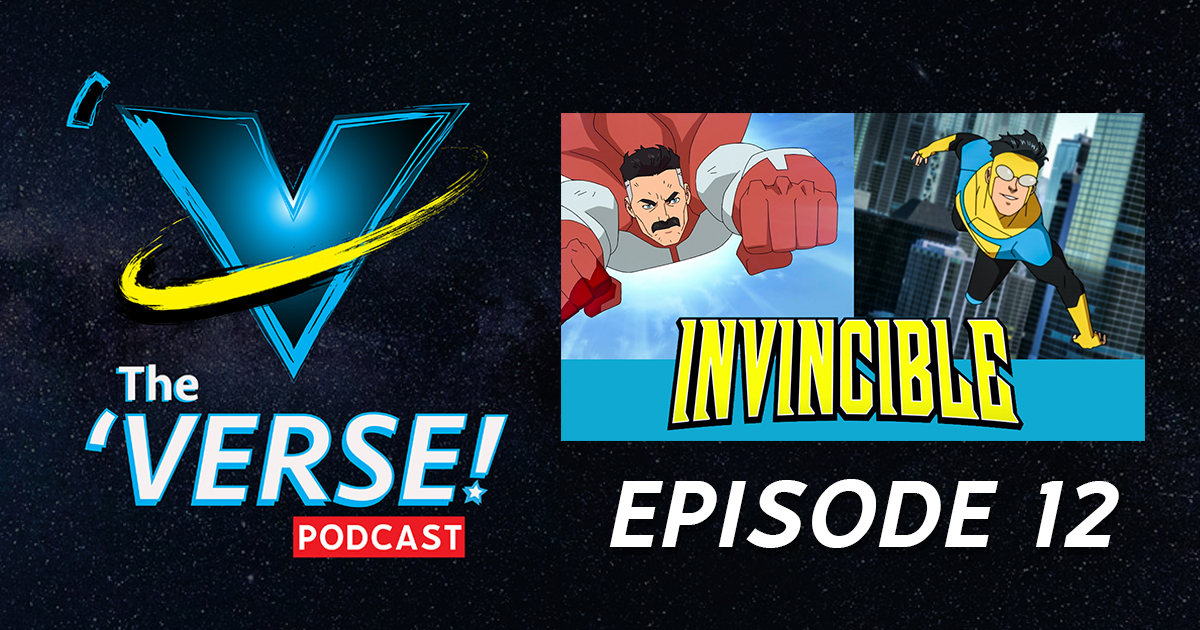 It’s that time of the week to step into The ‘Verse! – the podcast where we visit different corners of the cinematic universes from Marvel, Star Wars, DC, and beyond!

This week we changed things up and dove headfirst into Amazon’s Invincible! This incredible animated and action-packed series features an unbelievable voice cast which includes J.K. Simmons, Sandra Oh, and Steven Yeun with additional voices that include Seth Rogen, Zachary Quinto, Andrew Rannells, and even Mark Hamill! YES that Mark Hamill! The 8-episode series has so many twists and turns, the ‘Verse! Squad recommends wearing a seatbelt for at least your first watch-through. And as a friendly reminder, although Invincible is an animated series, this show is NOT for kids, like absatootinlootly NOT for kids!

Per typical ‘Verse! fashion, the Squad provides a recap and an analysis of Invincible but with a slight twist: we actually have TWO breakdown sections-one with spoilers and one without. Our spoiler-free recap comes right at the beginning of the episode, so feel free to listen, then pause before you head into *SPOILER ALERT TERRITORY.* The ‘Verse! Squad does not want to be held responsible for spoiling anything from Invincible so listen at your own risk. Otherwise, if you’ve already binged Invincible as the Squad has, dive into both recaps as we try to piece together our brains from that mind-blowing first episode and finale.

Besides Invincible, we had plenty of news to discuss from Spider-Man: Into the Spider-Verse 2 casting, Post Malone’s influence on future generations, a Black Panther series coming to Disney+ (the Dora Milaje go wherever they please and they have chosen Disney), the wrapping of Thor: Love and Thunder, and much much more! You may or may not hear from our new sidekick Kronsworth as well as he’s still figuring out his place within the Squad *HINT* It’s definitely not in the mailroom.

In addition to Episode 12 of The ‘Verse! We have a few other exciting projects headed your way! This includes our phenomenal interview with M.O.D.O.K. co-creator Jordan Blum which is ready for ‘Verselings to listen to wherever YOU find your favorite podcasts. We also have another super amazing interview on its way with Invincible showrunner Simon Racioppa so make sure to stay on the lookout for that extra episode of The ‘Verse as well!

As always, make sure to give us a follow on Twitter @TheVerseCast or @ScreenRadar on Facebook, Instagram, and Twitter so you don’t miss a single beat of everything happening in The ‘Verse! Next week you can expect some exciting coverage of Loki premiering on Disney+ and that is one show you DO NOT want to miss. Remember, you can listen to The ‘Verse on Spotify, Apple Podcasts, Google Podcasts, Stitcher, and wherever you find your favorite podcasts.