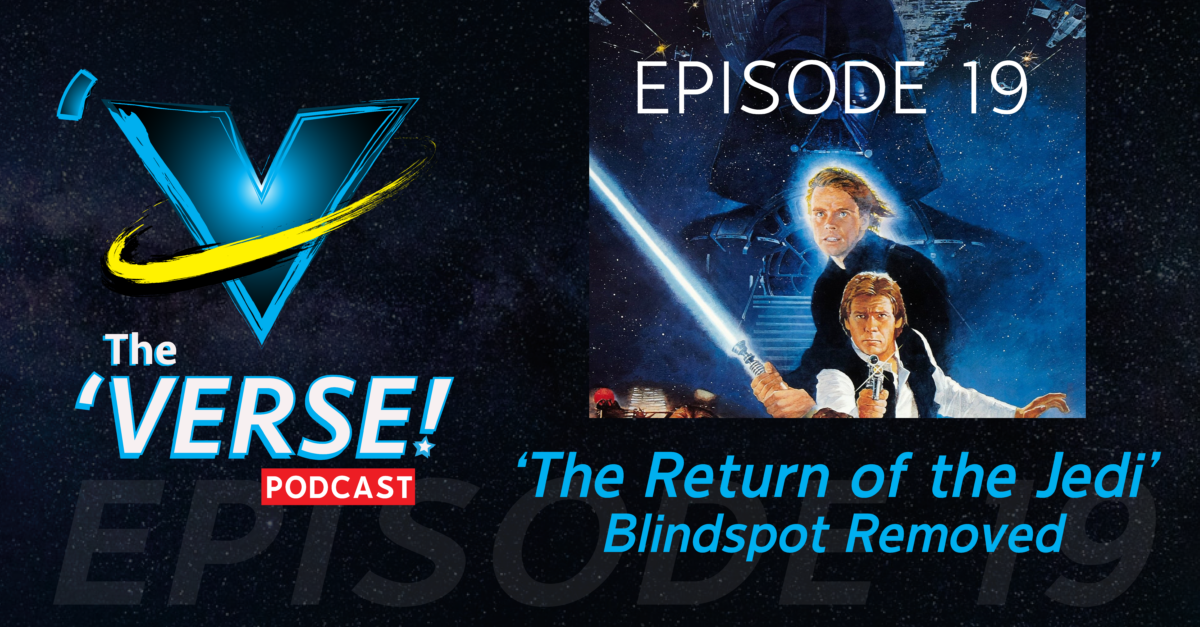 It’s been an interesting few weeks here amongst The ‘Verse! Squad, from wormholes to missing members, some rando who call himself ‘The Architect,’ and a whole bunch of severe thunderstorms that generate when someone says the phrase ‘spoiler storm.’ Despite all this craziness, we are glad to jump back into our regular episode format following last week’s special edition of The ‘Verse! – where we dished on all things Black Widow.

This week we’re wrapping up Emilia’s Blindspot of the original Star Wars trilogy as we hear her first thoughts and impressions of Star Wars Episode VI: Return of the Jedi. Don’t worry though, we are only one-third of the way through Emilia’s Star Wars Blindspot as she has yet to see literally every other piece of Star Wars content ever (GASP!!). But for now, we’ll just settle on the OG trilogy, although Star Wars fans most definitely need to tune in for this conversation as Emilia shares who her favorite characters are thus far, best scenes, gaping plot holes, and some pretty slick theories. Just wait until we start the prequels!

In addition to Blindspots, we also dive right back into news coverage which includes the official/not-so official casting of a live-action Ezra Bridger and Grand Admiral Thrawn from Star Wars Rebels, Bob Odenkirk’s health scare on the set of Better Call Saul, apparently the Rock and Vin Diesel’s feud within the Fast and the Furious franchise, and fans not-so-stellar appreciation of Masters of the Universe.

Now, as the Squad gets back on schedule, make sure to catch up on some of our more recent episodes including full coverage of the Emmy-nominated Marvel series on Disney+ WandaVision and The Falcon and the Winter Soldier, as well as Loki. We also have a lot more content headed your way including the Squad’s coverage of James Gunn’s The Suicide Squad, some thoughts on Season 1 of Star Wars: The Bad Batch, and a super special conversation with someone about a super special show on a super special streaming platform that will be released shortly as its own super special episode.