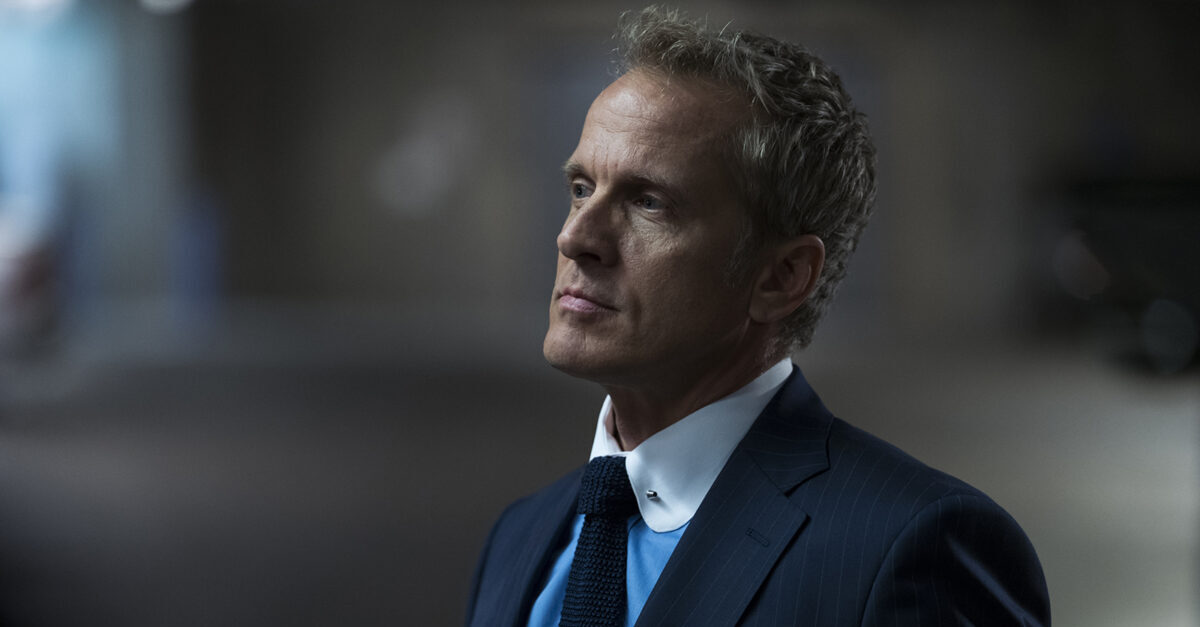 Fans of the highly-acclaimed series Better Call Saul are still talking about the series’ latest episode, and rightfully so. Patrick Fabian delivers some of the best work of his career. The closing moments add an exclamation point to end of the sentence that he has constructed as Howard Hamlin. While that mid-season finale left a huge impact on viewers – one that will resonate for a long time, alone it means nothing. Fabian’s performance in these final episodes only lands with such a bang as a result of his outstanding work on the preceding six seasons of Saul.

Fabian portrayal of Howard on Better Call Saul, has been a standout. It is a real testament to what the actor brings to each scene, especially when working against potential scene stealers like Bob Odenkirk (Jimmy McGill / Saul Goodman) and Rhea Seehorn (Kim Wexler). Their characters dominate many of the moments they shared on screen with Howard, simply because it is written that way. As Fabian described it, “I spent a lot of the series listening to those two talk to me, that’s the truth. Howard had a lot of things delivered to him from those guys, especially with Jimmy. Jimmy would have these beautiful monologues and he would be doing his thing.”

Somewhere between McGill and Wexler’s scheming, Howard became a character viewers grew to be compassionate toward, even if he is not a character with whom viewers find easy to root against. Fabian’s performance conveyed the humanity of a character born with a silver spoon in his mouth. It is that humanity that pushed through the veneer finish of Howard Hamlin to form the ‘exclamation point’ (and so many other of his moments ) that will stick with viewers long beyond the series’s run.

Awards Radar spoke with Fabian about his work on the series. It was a fascinating conversation that revealed so much about the actor, his process, relationships with his Better Call Saul family, and his utmost respect for creator Vince Gilligan, writer/director Peter Gould and the entire team of Saul writers. Here are just a few select moments worth noting, but I HIGHLY recommend you watch the full interview below. Not only is he a great storyteller, he does one hell of a Jonathan Banks impersonation.

Steven Prusakowski: Do you like Howard Hamlin? What was your read on him on day one?

Patrick Fabian: I did. Look, when they say he’s born with a silver spoon in his mouth or the sun shines on his side of the street, I don’t see that as a bad thing. I think those people have equal depth and problems that anybody else does. But I think actually, they’re so obsessed with the outside showing that there’s lots of rattling around in that hollowness that can be happening.

I think, on the very first day, I started leaning into sort of my perception of Howard being the bad guy. I mean, Jimmy says, I’m Lord Vader in the very first episode. But, Vince (Gilligan – series creator) leaned down to me at one point and said, ‘you know, we’re not sure what Howard is yet and we hired you. So, just keep that in your mind.’ So I recalibrated instead of thinking of twirling my mustache, which by the way, is a terrible acting choice – but guilty.

I thought of my dad. I all of a sudden thought, ‘Okay, Howard… we’re not going to play him mean – mean people and bad people don’t think they’re bad or mean anyways. I’m like, ‘What is he?’ He’s a decent guy. He’s like my father. My father is a handshake, man. He’s not a liar. He’s a straight shooter. I thought Howard runs a straight shooting game. His law firm is straight. They’re lawyers. And they’re going to press their case as far as it is, but he is absolutely running a clean show. And that’s what I thought. It was so interesting when the mighty Michael McKean gets introduced as Chuck, because Chuck validated that thought. Because Chuck comes from a moral center. He’s the law above everything. And I thought, ‘Oh, this is a great matchup. I’m the guy in the golf course getting work. And Charles McGill is the mind figuring out how we make these all go. So then later on, when it’s revealed that I’m sort of doing Chuck’s bidding, it hurts Howard, it goes against his nature of fair play. But he does it anyways. And that’s where the darkness lies, right? He does it anyways.

Steven Prusakowski: Why do viewers root for Jimmy who is so ethically damaged?

Patrick Fabian: I think for the viewer, there’s also the slow motion car crash aspect of watching the show. We liked him. Jimmy’s fun. Jimmy was fun in Breaking Bad as much as fun you can have in that you don’t. So we are rooting for him. And then when Kim’s there, we’re rooting for Kim. They’re kind of underdogs. And we’re like, ‘Isn’t a great?’ I think in that weird, delusional state, we’re like, well, they’re gonna end up in Santa Fe and a nice tract home, they’re gonna have three or five kids and maybe a force out back. But we know somewhere in our minds, that that’s not what happens. Therefore, as we’re watching it, there’s that gruesome fascination. So maybe we’re cheering for them and enjoying those moments that we can, because we know, because we know too much.”

Steven Prusakowski: What was it like working with Bob and Rhea in terms of getting into your character’s head a little bit?

Patrick Fabian: I’d be throwing stuff at Rhea. And I guess what, if I threw the same line reading, I’d get kind of the same line reading back. And that’s on me. It’s not on her. I’ve given her this intention. She’s processing it and doing it. In particular – end of season five, when she laughs at me. I’m doing my last pitch about, ‘Get away from Jimmy.’ And she takes I think we own the dark courtroom. And I tell her, ‘Hey, I think this is what’s going on,’’ and she brayed laughter in my face. That happened on like, take nine.

And that’s Oh, you know, I remember the second part of the story. Conveniently, I forgot. Rhea suggested something. We were doing it and we were about seven or eight takes into it, you get that feeling where you’re like, ‘Ah, this is a rut, or worse, we don’t have it.’ And then you start thinking, we’ve done a number of takes, and we don’t have it. This is not good. And Peter Gould is also sort of like, ‘hey, let’s try…’ He’s trying to make us do something.  Then Rhea came up and she goes, ‘Do you mind if I…?’ and then she gave me a suggestion. So that informed a different line reading. When I got to that point, it was like a plunger, boom. And she burst into laughter and I was so shocked.  I think they had two cameras on us at the time, so we got it both angles. And as soon as we did it Peter’s like, ‘That’s it!’ He was like 50 feet down the hallway, I heard him take his headphones off and run. He’s like, ‘That’s it. That’s it!’

Steven Prusakowski: What was it like shooting that finale?

Patrick Fabian: They couldn’t have written a better way. I mean, they just couldn’t. They couldn’t have it work on so many levels in terms of the series, the character, and then personally as an actor, and as a friend in the show, all of it is such synchronicity. I valued the time I had on the show. And I think it’s safe to say, I might never see that sort of thing again. I hoped there’s a chance, but at least I got to do it once like that, which is a miracle.

Steven Prusakowski: What is it like saying goodbye to Howard and Better Call Saul?

Patrick Fabian: Bob said it best as he often does. We were sort of you know, in the goodbye stages of wrapping everything up and he just said, ‘you know, didn’t we do everything? I mean, we did everything, right? We checked all the boxes.’ We all got together and we did everything: we visit each other on set in the middle of the desert at night, we rescue dogs off the desert, we lived together, we hiked all over Albuquerque we ate at every restaurant, we laughed and cried, Bob decided to have a heart attack and die in front of us as well. We checked ALL the boxes off!  Who expected that box to be checked? You never know – learn CPR, eat Mediterranean, that’s what I gotta tell you right now.”

To hear more of Patrick Fabian’s insights into Howard Hamlin and his work on Better Call Saul, watch the full interview. And, if you have not yet, be sure to watch all of Better Call Saul before it returns on July 11th to AMC for the final episodes of the outstanding series.

(This interview originally ran on our sister site AwardsRadar.com. For more Emmy and awards content, give them a visit.)