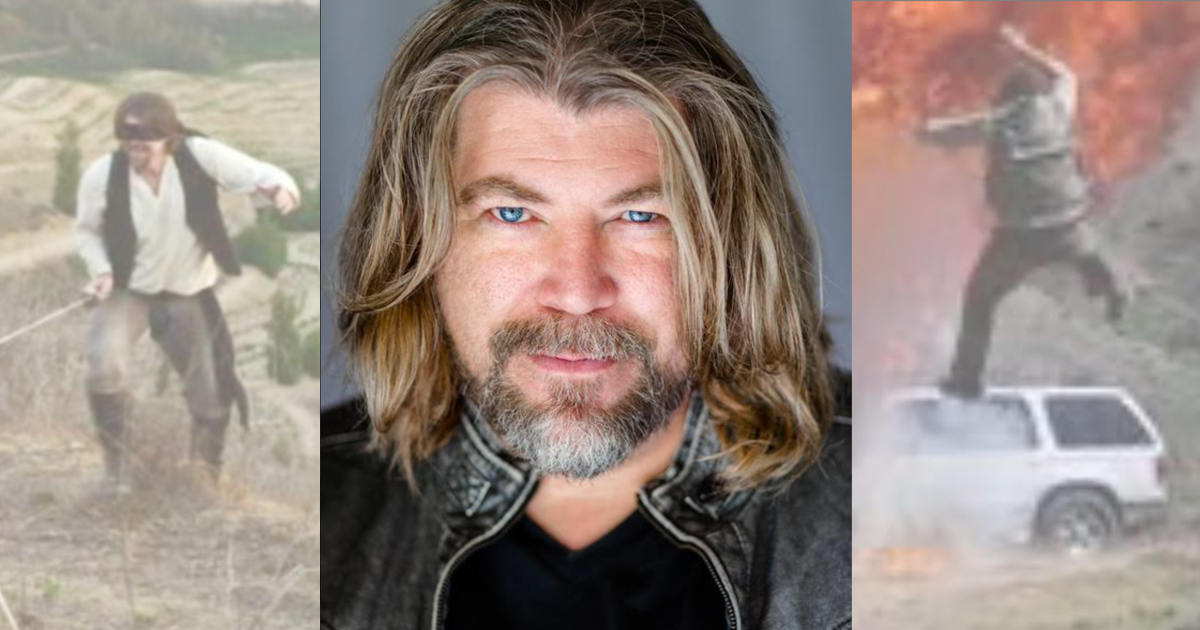 “I’m not the kind to kiss and tell, but I’ve been seen with Farrah…”

Ah, yeah! The theme song to The Fall Guy! Man, who hasn’t hummed the words to this famous television ditty to themselves at some point or another. I must confess to watching every week as Colt Seavers caught the bounty of the day and then did some amazing car stunt, or a death-defying high fall to end the episode. And, I must confess, in all the time I watched as a kid, surprisingly, I never once actually contemplated being a stuntman. I did dream about acting, however! In fact, years later, though I originally went to college to be a doctor, I wound up switching my major to drama and eventually dropping out of school altogether because I was unhappy with the perception I was being groomed to be a drama teacher and not a working actor. As such, my career in front of the camera actually began nowhere near the camera at all, but like many, as a waiter at various restaurant chains.

I actually fell into stunt work by complete accident. I was auditioning for a live stunt show at Six Flags Over Texas and was hired as the resident actor of the stunt group. For the next 3 years, I took the opportunity to learn everything I could about stunt skills such as high falls and fighting, whip cracking, and fire burns. In conjunction, I continued my acting training and read every book along the way about the business and craft of acting and eventually found myself in Orlando, Florida working at various attractions including the Wild Wild Wild West Stunt Show at Universal Studios. It was also in Florida where I began auditioning and winning roles in film as an actor, I landed a few days on Patty Jenkins’ Monster, and watched happily as Charlize Theron garnered award after award, including the Oscar.

With the momentum gained by acting beside Charlize in her award-winning turn as Aileen Warnos, I charged into Los Angeles and was surprised to learn that the majority of my live show entertainment peers had moved to Los Angeles. Some of them were making major moves as stunt coordinators on various tv shows. These guys opened the door to stunts for me in Hollywood. It was these same people who were aware of my acting skills and created opportunities to blend my two worlds and become a Stunt Actor.

This was in the early 2000s and action acting was a relatively new thing. There was a particular mindset that actors were not necessarily good at doing stunts and stuntmen weren’t good at acting. I have actually overheard a casting director say, ‘Stunt guys can’t act.” The stunt coordinator who had me in the room auditioning responded by saying, “I know actors that can’t act!” Casting relented and gave me a shot and I got the gig. That started me down a career path that would ping pong between being hired as an actor who can do his own stunts and a stunt man who can act. Slowly and surely, the role of Stunt Actor began to be accepted in both casting and stunt circles.

Fast forward to 2020. In the intervening years, my career has blossomed both in the acting and stunt world. I was beginning to reap the reward of the seeds I’d seen over the years in both worlds when suddenly, everything came to a crashing halt! Covid-19 had arrived, shutting down everything from Broadway to film sets across the planet. The industry was filled with anxiety and serious questions as to how to move forward thru a worldwide pandemic. Now that we have re-opened production once more in certain regions, the new state of Hollywood includes mandatory personal protection equipment, Covid Compliance officers, tri-weekly rapid testing, temperature checks, and isolation bubbles for cast and crew. Despite my worst fears to the contrary, it has been the Stunt Actor that has been able to grow exponentially during these troubling times.

I have been pleasantly surprised to find myself very busy since film production slowly ramped up in October. On one recent TV production, I was hired by the stunt coordinator to do my own fights. The character also had important acting beats across from the leading characters. For this role I needed to audition and be approved by the director. On a second project, I was hired by casting due to my acting chops, but they wanted to incorporate my fighting into the big finale sequence. I was able to kill two birds with one stone, not only fusing the stunts and performance together but also reducing the number of people who have to be tested and possibly exposed to the virus. In a world where having fewer people on an active set translates to a minimization of the possible exposures of Covid to the cast and crew, and, with that exposure, a possible shut down in production, it behooves producers to hire fewer people who can wear more hats. That’s where the Stunt Actor can fill the gap. A trained stunt man who is also a trained actor, one who understands character, dialogue, and acting in general can be a boon to a project by saving production money on tests and unnecessary exposure to the virus.

As the film industry starts and stops, finding its way through the minefield that is the Covid 19 pandemic, I foresee stunt actors will have a place at the table moving forwards. The vast majority of cinematic eye candy is chock full of stunts these days, from the superhero franchises to projects in a galaxy far, far away on tv. The action itself tells a story, and it is important that the action has qualified storytellers to serve itself. Let’s take the lightsaber battle between Luke and Darth Vader in The Empire Strikes Back. Vader could have destroyed Luke, but he didn’t, because Vader knew (even though the audience didn’t at the time) Luke was Vader’s son. Vader was testing Luke, to see if he could be turned to the Dark Side. He did not use his most deadly attacks because he wanted to destroy Luke’s spirit, not his body. The fighting reflected that.

In contrast, let’s examine the lightsaber fight between Darth Maul and Jedi’s Qui-gon Jinn and Obi-Wan Kenobi in The Phantom Menace. It was a battle to the death! Darth Maul asked for no quarter, nor was any given. The battle was brutal and ended in death. You can look at these two fights and see the difference in intention, tone, and the economy of motion to understand that each individual fight tells its individual story. Today’s story-telling in stunts is more than just the throwing of hands and kicks. It has to evoke a reaction in the viewer. Today, the Stunt Actor is action’s best storyteller. (Ultimately, that’s why I throw my hat in the ring to be cast as the bounty hunter Dengar in the upcoming tv series, Book of Boba Fett!!)

The sky’s the limit for Stunt Actors as we move into 2021. The marriage of performance and action is already here with the relevance of the ongoing comic book blockbusters and the stunt coordinators, ground pounders, stunt specialists, riggers, and drivers who create the action that drives the box office for these films. Now, the stunt actor has the opportunity to take their place in this pantheon of collaborators that are instrumental in bringing the big screen to life.