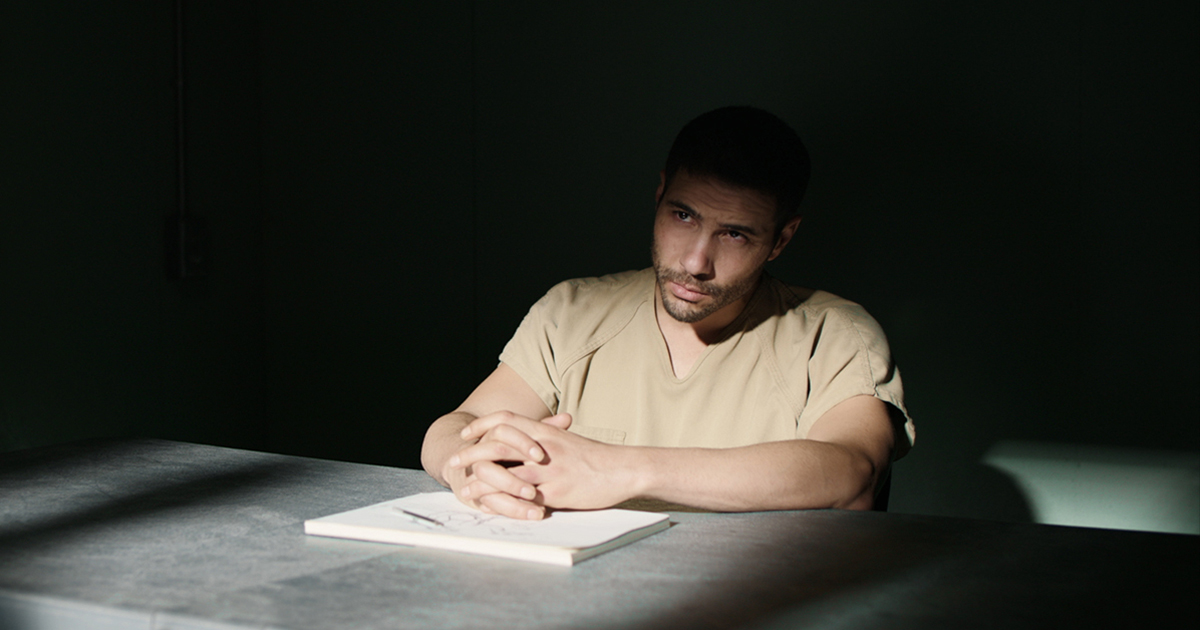 Based on “Guantanamo Diary” the memoir of Mohamedou Ould Slahi, Kevin Macdonald‘s (The Last King of Scotland) new film The Mauritanian forces us to peer into the mirror to assess who we are as a nation. The legal drama takes a long painful look at the brutal methods of interrogation and imprisonment at the Guantanamo Bay detention camp.

We have all heard about the inhumane actions taking place there. It is not something that I do not feel really sinks in completely until it is witnessed with your own eyes. The Mauritanian pries open your eyes and mercilessly does just that. It subjects us, from the safety of our TV screens to witness the cruelty and relentless torture of fellow humans that occur in the interrogation rooms. All of it under the guise of patriotism. It is a powerful film that is at the same time frustrating and disheartening. Kind of a running theme of America as of late.

The Mauritanian begins as we see Slahi (Tahar Rahim) torn away from his peaceful life and taken into captivity by the U.S. Government. He is then detained in Guantanamo on suspicion of connection to September 11th. It is there where he stays for over a decade, held without charges against him. It is not until a pro bono defense attorney Nancy Hollander (Jodie Foster) and her associate Teri Duncan (Shailene Woodley) come to his defense that Slahi is provided anything close to fair treatment.

Military prosecutor Lt. Colonel Stuart Couch (Benedict Cumberbatch) is their opposition. On behalf of the USA, he attempts to gather the evidence needed to keep the suspected terrorist imprisoned. As both sides build their cases they run into obstructions from all sides. It all makes you wonder if this man incarcerated because he is guilty or simply because the government thinks he is guilty? But that would never happen in the USA, would it? Nah.

Like anyone who witnessed the 9/11 attacks on NYC as they unfolded on their television, it is easy to grasp the frustration, anger, and fear created by that day. We wanted to feel safe again. We wanted someone to pay. America could not afford to let another terrorist slip through our hands. What this film asks is, at what cost are we willing to protect the country? And, at the end of the day if we are willing to wrong persecute the innocent then what is it we are protecting?

At the core of the film is a legal drama where we spend much of the watching both sides sort through boxes (and boxes) worth of potential evidence as they try to make their case. Each believes they are fighting the good fight, even if they are not 100% sure if that is true. Is Slahi is a completely innocent man or does he have involved in supporting the attacks? The doubts of the characters carry over to the audience, keeping us off balance and unsure how to feel about the tactics used on him. It makes it uncomfortable at times as we wonder if we are being duped into rooting for the enemy.

McDonald’s documentary filmmaker past shines through delivering a tight, gripping legal procedural, even if it never delivers the dramatic power punches of films like A Few Good Men. Instead what we get is a tense, often quieter film where the humanity of the defendant holds the spotlight, not a display of legal showmanship. Most of the legal aspects of the film will feel familiar but still profound because of the weight of what is on trial here. They are not shot or edited in a fashion overflowing with style or energy. It is solid legal fare but it’s not what will stick with viewers. The stripping away of legal sheen and style only makes the performances stand out more.

The film differentiates itself from when it mines heart from Tahar Rahim’s performance as Slahi. Those who do not know the French actor’s work by now will remember him after this role. When we first meet him at his home you can see his spirit through his bright, expressive eyes and infectious smile. Later, during his interrogation, as his captors break his mind and body, his spirit and determination still prevail on his face. Rahim’s performance is so natural and sincere it would be hard, no matter where you land on the political meter, to not find some compassion especially after you see what they put him through. And, McDonald does not hold back there.

A seemingly endless torture scene gives us an unflinching close-up look at the inhumane and unAmerican treatment. The length of the sequence gives us a feel for just how relentless, maddening, and disorienting being in those shoes can be. It is tough to watch and ultimately just sad. Guilty or not, what the man suffers through in the name of our country is stomach-turning. Cinematographer Alwin H. Küchler’s uses several aspect ratios along with some film treatments to help establish setting and time throughout the film. Bordering on overuse, when used subtly it adds more impact to these moments.

In addition to Rahim, The Mauritanian delivers solid performances from its supporting cast. And what a cast. Jodie Foster shines in a magnetic but restrained performance enhanced by moments of flair. She is at the top of her game here transforming into her silver-haired, slightly older character with ease. It is always nice to see her grace the screen, and this is no exception.  You may find the scene of Hollander’s first meeting with Slahi sleekly reminiscent of her iconic The Silence of the Lambs. Quite fitting, but this time the monsters are on the other side of the bars.

Cumberbatch is strong here, he portrays the by-the-numbers prosecutor while selling the inner conflicts of his character. His American accent is distracting but not a deal-breaker due to the strength of his performance. Shailene Woodley, as Hollander’s junior partner, makes the most of her screen time but would have benefitted from some additional scenes.

The Mauritanian is a sobering and infuriating film. Watching the breaking of a man, both physically and mentally, is a no joy ride, to say the least. Luckily, the human spirit is tougher to destroy. And Rahim’s performance conveys Slahi’s optimism, determination, and non-resentful nature, injecting some much-needed tenderness among a sea of negative energy. No less evident than in some well-used real-life footage of the actual Slahi. It is as inspiring as anything you’ve seen on film. While a challenging film to watch, those moments alone justify taking it on.

The Mauritanian is available for streaming digital and VOD.

The Mauritanian is a powerful and challenging drama that puts the methods used to keep our country safe on trial.