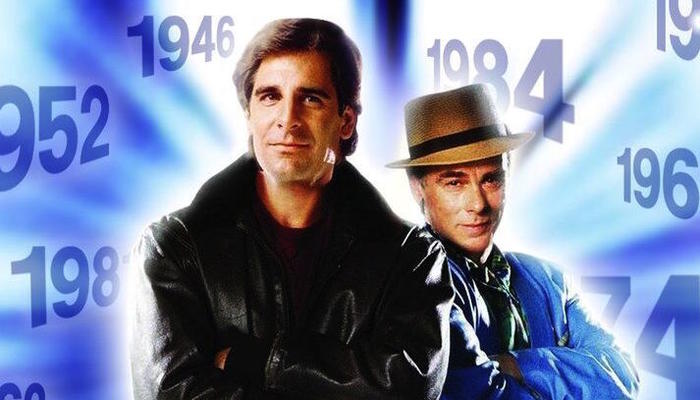 At a panel at Stan Lee’s L.A. Comic Con this past weekend,  Quantum Leap creator Donald Bellisario said that he’s written a feature film script for the cult sci-fi show. Here’s what he casually said to the crowd:

“I just finished writing a ‘Quantum Leap’ feature. I don’t know what’s going to happen with it, but I did write it.”

When asked for a little more info, he stated:

“I write things exactly the same way. I just start writing ands let them take me where ever it’s going to take me. I’m entertained the same way the audience is. So I just put Scott [Bakula] and Dean [Stockwell] in my head, kind of rebooted them, and went from there.”

The series, which ran from 1989 to 1993 on NBC, starred Bakula and Stockwell, and can best be described by the opening narration:

“Theorizing that one could time travel within his own lifetime, Doctor Sam Beckett led an elite group of scientists into the desert to develop a top secret project, known as “Quantum Leap”. Pressured to prove his theories or lose funding, Doctor Beckett prematurely stepped into the Project Accelerator and vanished. He awoke to find himself in the past, suffering from partial amnesia and facing a mirror image that was not his own. Fortunately, contact with his own time was made through brainwave transmissions with Al, the Project Observer, who appeared in the form of a hologram that only Doctor Beckett could see and hear. Trapped in the past, Doctor Beckett finds himself leaping from life to life, putting things right that once went wrong and hoping each time that his next leap will be the leap home.”

Like Star Trek before it, Quantum Leap worked best as a show about social issues wrapped in a sci-fi premise, tackling subjects like civil rights and the women’s liberation movement, as well as historical events like the assassination of JFK,  the Vietnam War, and Marylyn Monroe’s death.

Anything beyond Bellisario’s statement about the future of a Quantum Leap film would be speculation, but it would be interesting to see how he handles the story after the series finale. If you haven’t seen the series, we won’t spoil it for you, but it was considered controversial. At the same panel at Stan Lee’s L.A. Comic Con, Bakula defended the finale:

Incidentally, we loved the finale, particularly our own Jeff Heller.