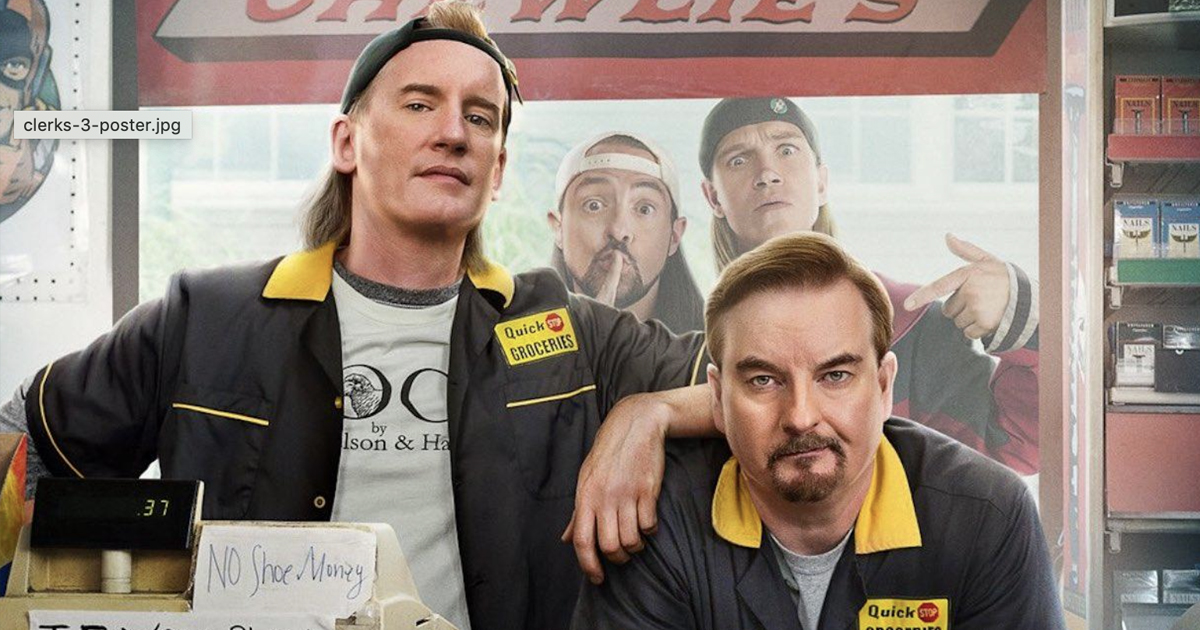 Everyone’s favorite disgruntled employees are back. Writer/director Kevin Smith returns to the Quick Stop where it all began, bringing Dante Hicks (Brian O’Halloran) and Randal Graves (Jeff Anderson) with him for the third film in the Clerks franchise. Clerks III is the ninth feature film in Smith’s ‘ViewAskewniverse’ (a shared universe, named after his production company, that also includes various comics, the short film The Flying Car, and the short-lived Clerks: The Animated Series).

Smith has had success outside of his ViewAskewniverse films, most notably producing series like AMC’s Comic Book Men and Netflix’s Masters of the Universe: Revolution, directing TV series such as The Goldbergs, Supergirl, and The Flash, and running his Smodcast podcast empire (not to mention achieving a level of geek and pop culture notoriety not unlike Stan Lee and Bruce Campbell), but for Clerks III, he has come back to his roots in Leonardo, New Jersey to explore the next phase of the lives of the quick-witted, foul-mouthed store clerks we first met back in 1994.

2006’s Clerks II had Dante and Randal buying and re-opening the recently destroyed Quick Stop, with a little help from Jay (Jason Mewes) & Silent Bob (Smith), with Elias (Trevor Gregory Fehrman) and a pregnant Becky (Rosario Dawson) in tow. With Dante being the focal point of the first two films, Randal takes center stage in Clerks III. After surviving a heart attack, Randal decides to make a movie with Dante about their lives at the Quick Stop (a plot that is very clearly autobiographical for Smith), which puts the focus on Randal this time around. “It’s going to sink the whole franchise, Randal carrying the movie,” jokes Anderson. “It’s going to ruin everything. No, it’s always great to step into the role. I enjoy working with Brian very much. I’ve told Brian this a million times, but if I wasn’t working with him, these wouldn’t go anywhere.” 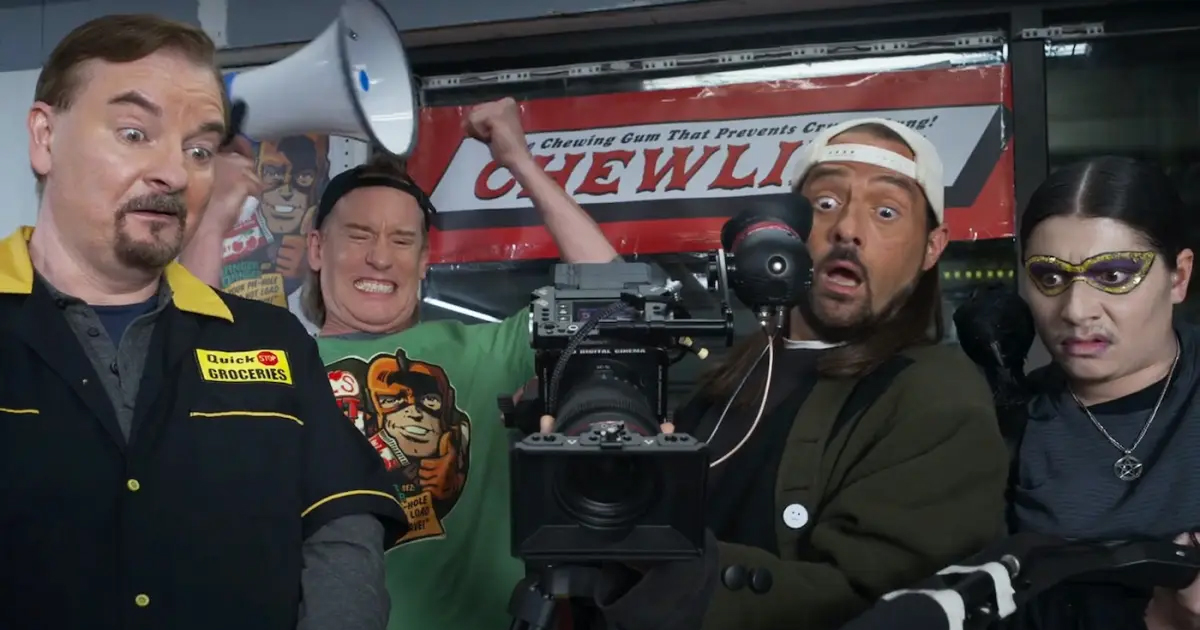 While nearly thirty years have passed since we first met Randal, Anderson doesn’t necessarily find that he’s matured much in that time. “I’m not sure he has changed,” laughs Anderson. “He’s gotten physically older. I think that’s it. But he’s still kind of the same guy. We will see him take a little turn in Clerks III. He’s finally going to kind of step outside his comfort zone.”

O’Halloran has welcomed the idea of periodically looking in on the lives of Dante and Randal over the years and seeing how their lives have changed. “Well, we definitely have gotten older,” says O’Halloran. “We’ve definitely gotten more mature in the sense of life responsibilities. When we last left off these two characters in Clerks II, Dante had a baby on the way, and he, Randall, and their silent partners, Jay and Silent Bob decide to buy the Quick Stop and own it themselves and reopen it. So, now you’re seeing a good slice of where they are today, fifteen years later. What’s this snapshot of where these characters are? I think the time breaks that we’ve built into these things have been perfect for people to go, “Oh, yeah. Whatever happened to those guys?”

Like his most recent films, Smith is forgoing the traditional distribution methods and is taking Clerks III on the road, visiting theaters and comic cons around the country on the Clerks III: The Convenience Tour. While ViewAskew staples like Mewes and O’Halloran have joined Smith on these tours in the past, this marks Anderson’s first foray into fandom. “This is kind of my first year doing it, but I’m having a lot of fun,” says Anderson. “Granted, it’s more people that I talked to the damn year crammed into one weekend, but everybody’s been so incredibly nice.” Anderson has the benefit of his seasoned co-stars to lean on when it gets a bit overwhelming. “Brian’s old school at this,” he says. “He’s talked me through it. When I start weeping in the back, he brings me down.”

While getting out and meeting fans has been a positive experience for Anderson, he remains undecided if he will continue to tour after the media push for Clerks III. “Right now, we’re going to finish out the year,” he says. “When I decided to do cons, I really jumped into it. I think I did 20-something this year. So, at the end of the year, I’ll reconsider. When I spend more time with Brian and Trevor than I do my own wife, I start to question myself.” 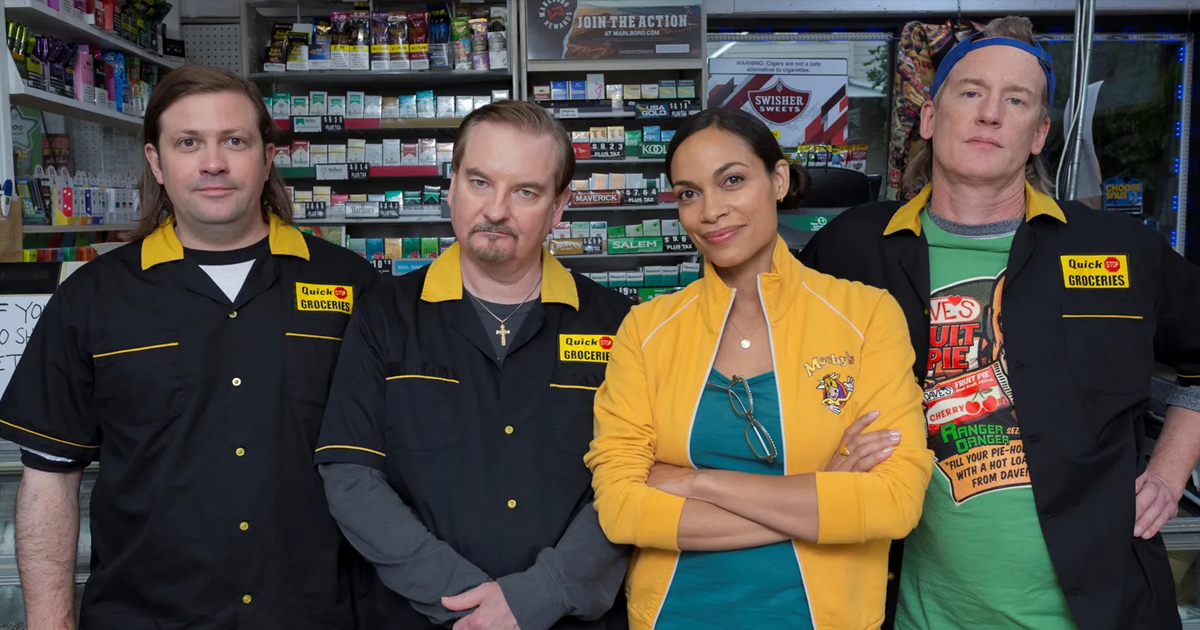 As for O’Halloran, he has a couple of projects lined up after the tour wraps up. “I’m probably going to hit a couple of the cities that Kevin is doing on the Convenience Tour,” he says. ‘From there, I have two other films that I’ll probably be working on the beginning of next year. We’ll talk more about that probably as the year gets closer.”

In the nearly three decades since the release of the first Clerks, Smith has become a seasoned director, helming more than a dozen films and multiple television series. O’Halloran notes how Smith has changed as a director in that time. “He’s evolved,” says O’Halloran. “He knows great technique in the sense of shooting things. He still keeps it incredibly simple, because that’s what it is. The stars of his movies are usually his scripts, and the scripts are amazing pieces to work with. As far as directing us actors, he trusts us. We’ve been with these characters for almost 30 years now. He trusts that we know them well, which we do. So, in the process of rehearsing this third movie, he gave us more leeway to put in some suggestions of either a line of dialogue here or a funny physical bit there, which was a lot of fun. This one, out of all them, feels the most collaborative.”

In addition to portraying Dante Hicks in the Clerks trilogy, O’Halloran has also stepped into the roles of Dante’s extended family, playing college student Gil Hicks in Mallrats, news reporter Grant Hicks in Dogma, and TV executive Sean Hicks in Chasing Amy. The actor was supposed to return in one, if not all of those roles, in the planned Mallrats TV series. Unfortunately, that show never came to fruition. “The Mallrats series probably won’t happen,” says O’Halloran. “Hopefully with the success of Clerks III, we have producers waiting in the wings to probably greenlight an actual movie sequel to Mallrats. Kevin pretty much has a spec script ready to go. We’d love to be a part of that as well and nice to see where those cats are at in the ViewAskewniverse. I think if the fans love this movie, then they’ll really enjoy what he has in mind for a Mallrats sequel.”

You can watch our interviews with Jeff Anderson & Brian O’Halloran below.