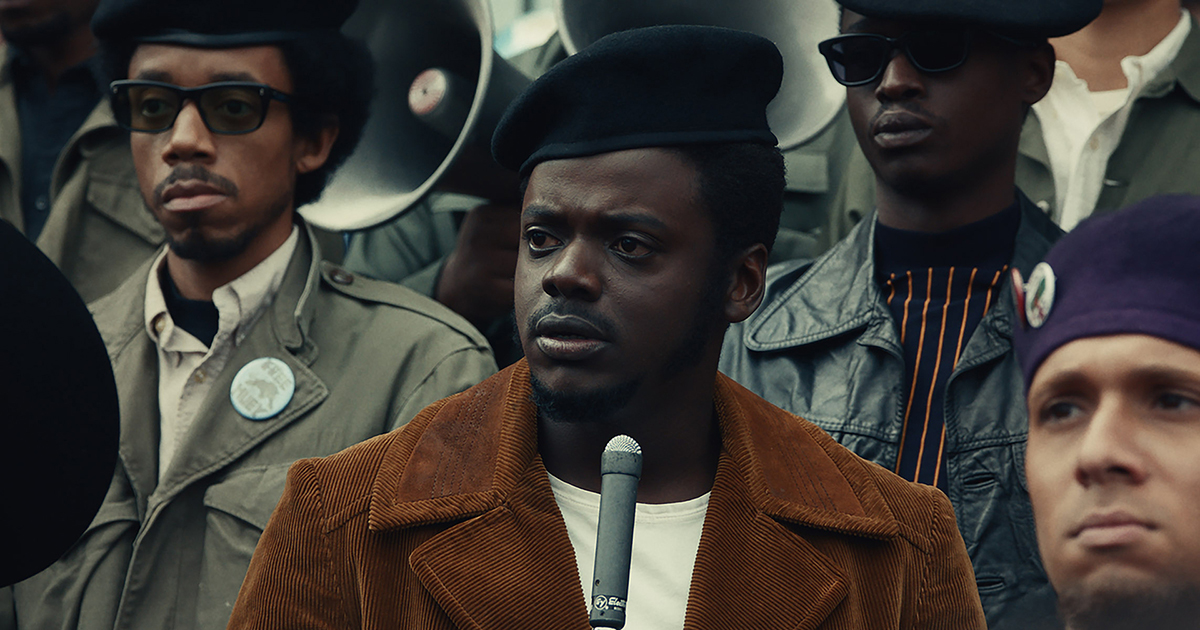 I find myself to be a relatively knowledgeable person. Sure, I lean on Google too much these days as an extension of that knowledge, but I have a general grasp of things past and present. (Now that I said that, please don’t quiz me). What I found disappointing as I watched Judas and the Black Messiah was not the film. Rather, it was my lack of knowledge of the plight of people of color in this country. I know the basics, but at the same time, some subjects or even periods of history are a blur at best. The story of Fred Hampton is one of those blurs for me.

I cannot say who is to blame. Is it the educational system? Am I a product of my own complacency? It is a flaw that I am working on. So, please excuse me if the words I use in my review are not as eloquent as I would hope they are.

Films like Shaka King‘s Judas and the Black Messiah are an ideal way to educate more people about the subject. As a medium, film not only reenacts history, it also makes it accessible, often delivering it right into our living rooms. It can also stir up emotions in ways others do not. The names of the past transcend beyond print on a page of a book into a dynamic and gripping medium that conveys the injustices on a deeper level. King’s film takes full advantage of the power of film. It breathes life into history, humanity into the names, and meaning into the messages.

William O’Neal (LaKeith Stanfield), a career thief who steals cars while impersonating an officer, lands in jail after a jacking goes wrong. The FBI uses his compromising situation to firmly place him under their thumb. O’Neal has two options, go to jail or work with them to infiltrate the Illinois chapter of the Black Panther Party. FBI Agent Roy Mitchell (an unnervingly calm Jesse Plemons) has him spying on Panther leader Fred Hampton (Daniel Kaluuya). Mitchell is a disciple of FBI Director J. Edgar Hoover (Martin Sheen unrecognizable in distracting facial prosthetics) who fears Hampton may be the “Black Messiah.” A leader strong enough “to unite the communists, the anti-war and the New Left movements.” Hoover’s goal is to destabilize the Black Power Movement. O’Neal is going to be their secret weapon.

Although the government constantly paints Hampton as a terrorist his motives are much more genuine. He is a warrior for equality, willing to do whatever is necessary to further the cause of those treated unjustly. His focus is on uniting the ill-treated into the Rainbow Coalition, a goal that puts him in the crosshairs of the fearful. Kaluuya is nothing less than powerful here. He fully embodies the energy and essence of a leader. With just a few lines of dialogue, you completely understand why the masses gravitated to him and, at the same time, why those in power feared him. The bigger the persona of Hampton becomes the more desperate his enemies are to silence him.

As powerful as Hampton’s words are, he also knows the price of justice. He is ready to be a martyr, an idea that does not sit well with his lover Deborah Johnson (Dominique Fishback). She is the poet who is pregnant with his son who loves both the man and the leader. Fishback plays her with tender nuance. As his political enemies try to dehumanize him, their quieter moments together on screen soften his harder exterior to reveal a regular more reflective guy behind it. This is most effectively seen when Johnson expresses her fears to him through the words of her poem.

Opening with archive footage and reenactments, the film sets the stage for the era. It reminds us that race relations were similarly (and sadly) broken and volatile back in the 60s as they are today. We are greeted by Craig Harris and Mark Isham’s moody score comprised of often jarring jazz horns, pulsing plucked bass chords, and rhythmic percussion. The hard-to-shake opening notes quickly and effectively establish the tone and introduce an ever-present tension.

In tandem with the score is Sean Bobbitt’s cinematography to capture the texture of the period. It provides a glumness through a palette of cool hues and humming neons. Characters are draped in deep shadows with only the light refracting through raindrops used to illuminate. The camera and editing are often lively, moving through the scenes to patiently disclose more substance. Although Black Messiah hits some biopic notes, the film really lives in the world much closer to a tense crime thriller, both in style and in tone.

There is an intensity to Hampton and O’Neal’s dour entanglement that keeps your pulse racing in anticipation. The duality of their fates possesses a written-in-the-scriptures feel. Hampton, the passionate, driven, beloved “Black Messiah,” looking to help the greater good even if he may have to sacrifice his well-being. On the other side of the silver coin is O’Neal, the “Judas” figure. He is a selfishly motivated man whose disconnect from the cause makes him the perfect pawn of the powerful. Two contrasting forces at work. The biblical parallels are strong (hell, it’s in the title) and remain active right up to the end.

The screenplay by Will Berson, Shaka King, Keith Lucas & Kenneth Lucas is a standout. It explores well beyond the story of two central characters. They ambitiously weave a wide scope of threads in a robust tapestry of the era. Bigger ideologies combine effectively with the smaller threads to make this more than a standard history lesson. Layered, rich, and dimensional characters (some focused and driven, others deeply conflicted, and others plain corrupt) seat you firmly at that volatile moment in history, providing you with numerous perspectives as it does. It dives deeper into the interconnecting relationships of its players in a true page-turner fashion. There is almost too much to fit into one film. Somehow King pulls it off even including some re-enactments of an actual O’Neal interview that adds real weight to the albatross around his neck.

King gets the most out of the ensemble who deliver power punches through soaring speeches, quieter moments, and deceptive nefariousness. Speaking of which, Plemons is chilling as the smooth-talking, manipulative federal agent. He seems like the perfect neighbor, but he can just as easily arrange the framing of an innocent man with the same emotionless disconnect as he offers a cocktail. You can read the internal anguish O’Neal wrestles with on Stanfield’s face. In his moments of silence, the pathos that exists behind his eyes alone is incredible. And, as stated but worth mentioning again, Kaluuya is electrified. He disappears into Hampton, transforming into the charismatic leader delivering his words with a hypnotic cadence.

Judas and the Black Messiah is transfixing and profound cinema. There is an underlying and haunting sadness throughout. History has proved there is no magical happy ending. Not for the people involved, the movement, or the state of race in the world. In a year of strong finishes, the closing of the film, (especially an on-screen epilogue) is about as impactful as you see this year. It knocks the wind out of you. At the same time, there is a glimmer of hope that these stories are reaching a wider audience. I am sure it will anger some people (something always does), but it will also start discussions. Just about any scene here that can be broken down into a meaningful socio/political/economic/racial discussion for every character on screen. This is exactly why film can be such a powerful medium. Film can be part of the revolution.

Judas and the Black Messiah is in theaters and airs on HBO Max starting February 12th.

“Judas and the Black Messiah” is a powerful film with incredible performances that breathes life and energy into history.