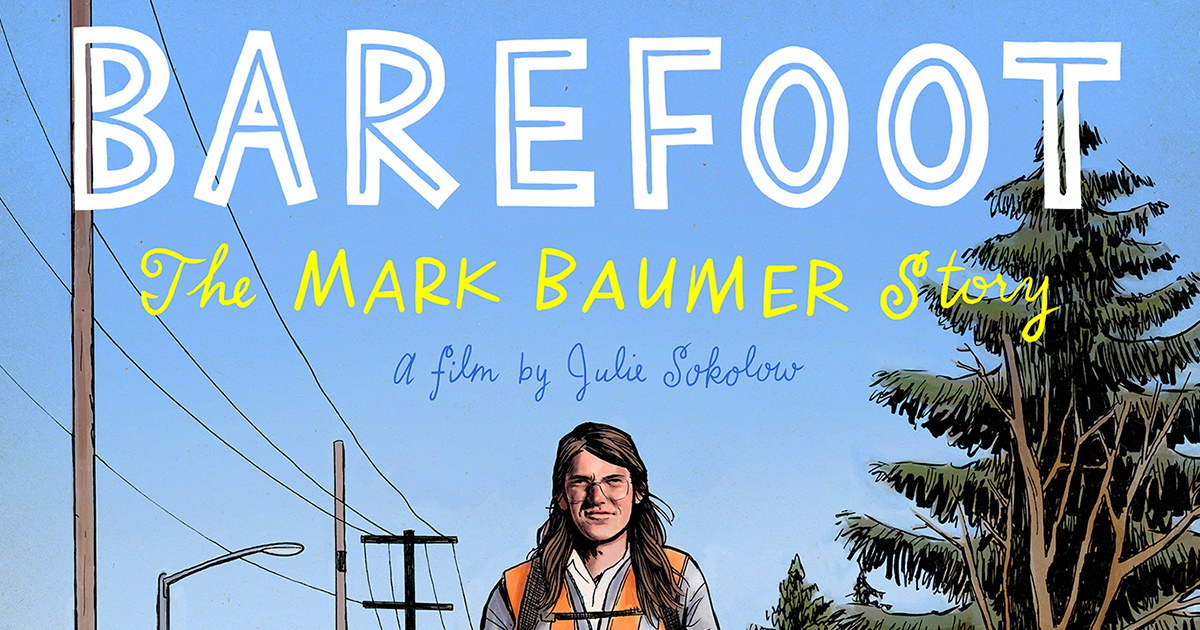 On Oct 14, 2016, Mark Baumer started a barefoot walk across the country; a one-man mission to bring attention to climate change. Mark never made it across the country. 100 days later, that mission and his life came to an end.

Yet his journey carries on in the new documentary, Barefoot: The Mark Baumer Story from award-winning filmmaker Julie Sokolow (Woman on Fire), an inspirational look at the man who seized the opportunity to live this life and make a difference. Like Mark, the film is a one-of-a-kind, literally taking viewers along on his cross-country journey through his self-recorded video diary. It was those online videos that caught Sokolow’s attention.

“I found his videos online and he was walking barefoot across America to protest climate change and making these videos every single day with this amazingly humorous persona and a penchant for the absurd and the New Yorker liken to him to Andy Kaufman and he had this childlike wonder about him and this kind of guerilla-style filmmaking that he was doing on the road by himself,” said Sokolow. “I was just very inspired by him and I liked that new take on environmentalism from a sort of performance art perspective.” Sokolow reached out Mark’s parent’s Mary and Jim Baumer. They had wanted to honor the life of their son. Just months after his death they pushed through their grief to work with Sokolow on what would become Barefoot.

Sokolow uses the prolific social media library Mark left behind, including a daily log capturing the barefoot protest, to give the documentary a deeply personal touch. The trials and triumphs. The film invites viewers to walk in his footsteps for the entirety of the cross country journey that ended abruptly and tragically.

The cross-country walk was no walk in the park for Mark, both physically and mentally taxing. He carried with him very little besides a few essential items and often slept in the least appealing of place. Through rain, sleet, snow, and even the streets of New York City he pushed through, driven by the need to bring attention to the paramount issue of the effects of climate change on this planet. Even if that meant cut, swollen and chemically-damaged feet that required nightly care; he was unstoppable. Not only did he take on each challenge head-on, he often seemed to relish in it.

Barefoot showcases Mark’s trademark humor, spirit, and tenacity. He carries himself with a larger than life persona that may come across as loud and over the top to some , but quickly becomes endearing. Performance art with a purpose.

Sporting long hair, oversized sunglasses, and bare feet you might expect him to be an outcast. Instead, people embraced him. Everywhere he traveled Mark would gain friends and followers along the way. His passion was infectious. Funny, boisterous, and often quite goofy, he seemed to be winging it, but there was more going on inside this book than its expressive cover.

“It could seem like he was just a totally unscripted guy,” explained Mark’s father, Jim Baumer. But actually, “he was quite prepared, notes he had made to itself. Early in the trip. To try to make sure he highlighted certain things. So there was a sort of preparation, you know, that may have come across as unscripted.” His preparedness shines through in his clever self-promotion, which included calling local news services to report “this man walking barefoot across America.” Every chance he could, Mark was preaching about the climate: on the streets of Manhattan, in convenient stores, and with passing drivers offering him a ride. Mark was always on.

While always attracting the spotlight, Mark was never self-serving. He was an activist to the core. The environment was the star. “All of his decisions really began to be sort of fed through sort of the prism of, you know, how can I minimize my carbon footprint, you know, and he probably had the smallest carbon footprint of anyone I have ever known. Personally, I feel like Mark’s carbon footprint was his own carbon offset program for all the rest of us.” Jim Baumer said.

With there being less than two weeks before the presidential election, the timing of Barefoot‘s release date does not seem like a coincidence. Set against the backdrop of Trump’s 2015-16 rise to power, the film intercuts news clips, creating a dual narrative about Mark but also some of the political negligence that had compounded the dire climate issues we now confront.

The two narratives converge in the most unexpected and tragic of ways. “Sadly, he was killed on the walk, in 2017, it was the day after Trump’s inauguration. So, of course, it felt, extra symbolic to lose such a powerful environmental activist while Trump was driving the power, being a climate change denier.”

“The film really gives you a nice recap of what was going on in 2015 and 2016 with Trump’s rise to power and showing the debates between Trump and Hillary Clinton, showing Mark Baumber’s reaction to being on the road. Seeing Trump signs and realizing that Trump was actually going to win this thing,” explains Sokolow.

One of the film’s goals is to “refocus our minds towards climate change and that political context of, who do we want to vote for who’s going to protect the environment, and have that be front and center in our minds because obviously a lot of other things have muddied our perceptions lately.”

In this divided, cynical world, how we can make a difference?

“We are not asking or expecting folks to go walking barefoot across the country and imitate Mark in that way you know he was one of a kind, and very bold in the sort of performative action that he took. There are just so many things we could do better in a manageable way,” said Sokolow with a hopeful smile. (More helpful tips and much more can be found in our interview above).

Some very manageable steps we can take can be found on the website established by Jim and Mary Baumer to honor their son. According to the site’s mission statement: The Mark Baumer Sustainability Fund exists to fund important community projects that raise awareness about the environment, promote social justice, as well as involving under-served populations directly in renewing their communities.

On January 21, 2017, Mark took his last steps. Through this documentary, his parents, and the Fund, his spirit will carry on. Every time we have a meatless day, walk instead of drive a car, or vote for a candidate who fights for our planet’s well-being, we take another footstep on Mark’s journey.

‘Barefoot: The Mark Baumer Story’ debuts on VOD and digital on October 27th.