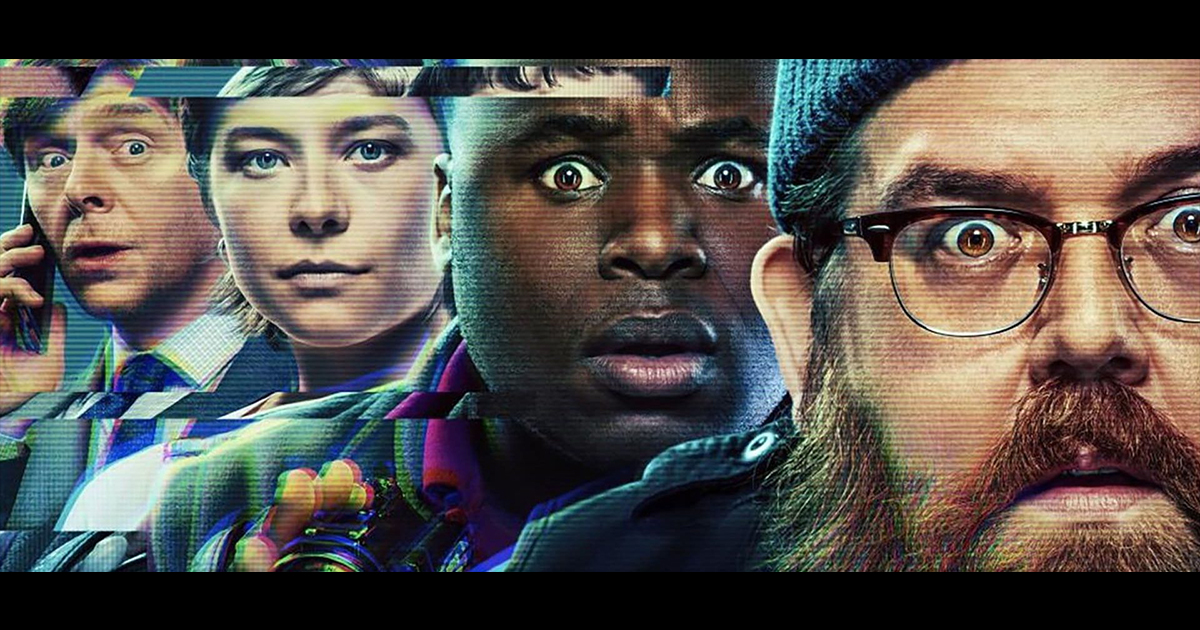 Lockdown stretches on around the world (except for New Zealand, those lucky responsible bastards). It’s a potent mix of dull and traumatic as we wait for good news, and read endless streams of bad news. In this lazy but stressed existence, I took a lot of comfort in Amazon Prime’s Truth Seekers.

In this latest Simon Pegg and Nick Frost collaboration, we follow Gus (Nick Frost), a crack broadband installer who moonlights as a paranormal investigator for his YouTube channel Truth Seekers. He’s paired up with Elton (Samson Kayo), a cheery Millennial with a history of odd jobs. The two travel England installing high-speed Internet for the broadband provider Smyle in a company van decked out with ghost-hunting gadgets. Gus has witnessed little in all his years of investigating the paranormal, but his ghostly encounters spike from Elton’s first day.

Along the way, the duo picks up other squad members: Elton’s nerdy, agoraphobic sister Helen (Susan Wokoma) and Gus’s father, played by the Malcolm McDowell of A Clockwork Orange fame. Simon Pegg takes a backseat as Dave, Gus’s boss at Smyle, who spends much of the season wearing an atrocious wig and sitting in his office.

The great strength of Truth Seekers is in its commitment to efficient setups and payoffs, the primary currency of both comedy and horror, the two genres this show straddles. The writers don’t waste a single line in the season’s short runtime of just under four hours. They cover an intricate and expansive plot while delivering well-paced character arcs for its ensemble cast. Many of the lines in the first few episodes fill multiple roles as entertainment, character development, and foreshadowing, all at once.

As a result, the plot unfolds gently and the pacing is well calibrated. Each episode has a balanced cliffhanger that keeps us clicking into the next, but it doesn’t torture us with unanswered questions in case our binge session gets interrupted. That’s what makes the finale so satisfying. Without spoiling anything, our lingering questions get answered. We receive a new set of curiosities to speculate over before season two. It’s less popcorn and nail-biting excitement, and more nice cuppa tea on the weekend.

This style of careful setup and payoff is mirrored in the show’s humor. The jokes are muted, and some take the whole season to pay off. It’s a sparse approach that I admire, and it works most of the time. But not always. For example, Elton’s full name is Elton John, which generates about as many joking song references as you’d expect. I’ll admit that my nerdy soul chuckled every time, but I can tell this approach to humor gets stale even within eight episodes. This is also where many reviewers lamented the absence of Edgar Wright, the third famous collaborator of the Pegg/Frost duo, who directed Shaun of the Dead, Scott Pilgrim, and more.

This is the big elephant in the Zoom meeting. Truth Seekers is not an Edgar Wright film, and if you’re expecting that, you’ll be disappointed. This show’s style isn’t as dynamic. It feels more closely related to the X-Files, which is exactly what the creators set out to do. They drew inspiration from the iconic sci-fi series as well as from the works of John Carpenter or Arthur C. Clarke.

But we still have two of the three famous collaborators, so certain hallmarks of Edgar Wright’s films remain. The show pulls jokes out of creative edits. Characters and things enter the frame in funny ways. But in general, Wright’s creative touch isn’t very present. This is not a criticism of Truth Seekers; the editing style is well-executed, and episodes flow smoothly with the help of a slick original soundtrack.

But one of the most important features of past Pegg/Frost collaborations remains. The characters are lovable. Their traits are relatable, but also distinctive, so we empathize with them, and love watching them onscreen. And the stellar cast performances elevated these personalities. Frost and Pegg never fail to deliver a charismatic performance. Kayo and Wokoma bring real heart to their portrayals of dynamic but troubled young adults. And McDowell balances the charming and the crotchety as Richard.

They paired well too, in perfect juxtaposition. My favorite example is Helen and Richard, an anxious millennial, and a grumpy baby boomer. On paper, these are polar opposites that get in nasty fights on the Internet. But in this show, they’re good friends. They embody some stereotypical traits, but their friendship goes beyond the tropes as they recognize in each other a shared experience of loneliness.

Truth Seekers accomplishes what it sets out to do. It’s a comforting place to be as we wait out the pandemic. Admittedly, it falls under the shadow of past Pegg/Frost works, and it doesn’t take many risks (though who knows what’ll happen in season two with that finale!). It’s well-paced and features charming and sometimes lonely characters searching for some kind of truth or connection in a mysterious world. Sound familiar?

Not Wright, and not wrong. High-quality quarantine comfort.