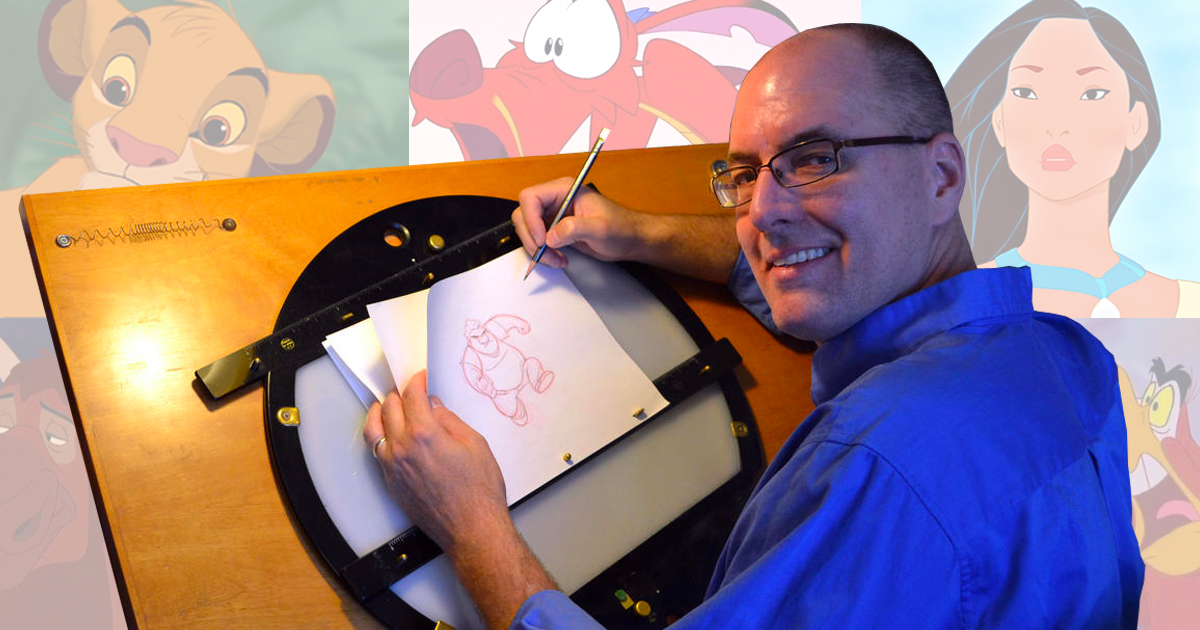 Tom Bancroft is a veteran animator whose most notable work came during his time with Walt Disney Feature Animation, with work on films such as Aladdin, Beauty and the Beast, Aladdin, The Lion King, Mulan and Brother Bear. In addition to his work as an animator, Bancroft is also an accomplished author, book illustrator and animation instructor. He and his brother, fellow animator Tony Bancroft, also host The Bancroft Brothers Animation Podcast.

Tom’s newest venture is Penclish, the world’s first crowd-owned animation studio. Pencilish Animation Studios intends to create high-quality animation, intellectual property, films and television that can be distributed and monetized through licensing, merchandise, and other revenue streams. We spoke with Tom about the new studio and what we can expect from it.

Where did the idea for Pencilish stem from?

It came from one of my partners, Ash Grayson, who owns a marketing firm called Ribbow Media. He’d already done Regulation Crowdfunding (Reg CF) for the first-ever crowdfunded Christian Film Company, and when that got successful, he told me about how it works and what you can do. He knew that I really wanted to start a company and create a new animated series and own it, but I was kind of thinking about going the route of just finding local investors.

That’s always an uphill battle, no matter how good your idea is, so I was kind of delaying it, I guess you could say. [Ash] said he would be involved and help with marketing, and we brought in his partner Jason [Brown], who is a Reg CF Master, as a consultant.

What kind of projects do you have in mind for Pencilish?

Well, a lot of people think we want to just be an animation studio work for hire, getting jobs from Cartoon Network, or Disney or whoever, but that is not the kind of company we are. We create our own content and partner with other established creators out there and help bring their ideas to fruition. Of course, we would own a piece of it, too, so we’re basically investing in the next superstars in animation that haven’t been discovered yet.

What advantages do you feel that you and your team at Pencilish have having worked at some of the largest animation studios in the world?

It certainly gives us a wealth of experience in creating animated content, and what the things are that people like and what quality is and all those kind of big question things, but it also helps us to know what not to do, which I think is even more important. Looking back at Disney after I left, I quickly realized the kind of waste that I was accustomed to, and how long everything would take, and how we overanalyzed everything and all the people that were involved with every step of the process. Yes, some of that is a huge benefit, there’s no doubt about it, but each person wearing more hats and going leaner is certainly going to turn your boat a lot faster. Theirs is a huge cruise ship and they cannot act or react to things very fast. I want to be a speedboat. I want to be an animation studio that can turn on a dime. We need to be able to go in a new direction and discover new paths, and they just can’t. They’re going to acquire; they’re going to find those people make them a little lifeboat on their huge cruise ship. I’m just not interested in having the ocean liner.

The current distribution system favors the large studios. What obstacles in terms of distribution do you think Pencilish will face, and how do you plan to overcome them?

Everybody will tell you that in any kind of film or TV, distribution is the hardest part. But we live in a time right now that is the golden age of content, right? Everybody needs content, because of all of the streaming platforms. Disney has obviously become a streaming platform, and now Warner Brothers has HBO Max. It’s just a great time, actually, and while I’m not going to say distribution is not a concern, but it’s less of a concern than ever if you have good content. Our initial plans are to go to YouTube and offer our content for free to get eyes within the first year. Once we have followers, it’s going to be our testing ground. There are so many eyes there.

Can you talk a bit about what someone can expect from their investment?

I try to explain as much as I can that they are investing in a startup. It’s always going to be a long-term investment. It’s not GE or Disney, where you’re going to cash out in six months, or even three months. I do think that we are really good about getting that information to the new investors and help them realize that this is going to be a little bit longer-term investment. So that said, we want to have a viable return on investment within year two, and maybe even a larger one, in say, year five. We’re kind of set up to be acquired, and not to say that that’s all of the plans, but I think it is definitely going to be the kind of thing that’s going to come to us sooner than we think.

Will Pencilsh be staying with traditional 2-D animation, or will you be working in various animation mediums?

I am a huge 2D aficionado, and I always will be, so I have no doubt that’s going to be the majority of what we do. But I don’t want to close the doors to any kind of technique. I’m all about just what’s right for that particular project, so that’s kind of where we’re going to make that decision.

What was the transition like from moving from traditional 2-D animation to Veggie Tales, which was CG?

It was tough. A lot of people will say that computer animation is just another tool. That’s how they were selling it to us 2D animators during that transition time. They were saying, “Well, you know, you already know how to animate, so you can adapt to a new tool to do the same thing you’re doing now,” and that was not totally true. On paper, it’s exactly true. But I think the experience of switching over was more like saying, “Well, if you’re a great photographer, you can now be, a cinematographer. It’s the exact same thing. You’re still just taking pictures, There’s just more of them.” It is a radically different tool, especially the process behind it. The technology side of it was really intrusive to the mindset of a 2D animator, so much so that it felt like you were reinventing the wheel.

A few years ago, some of your former Disney colleagues voiced their disappointment about the CG remake of “The Lion King.” I’m curious where you stand on animators’ personal ownership and pride over their characters and how those characters are used down the line in projects such as live-action or CG remakes, particularly in the case of “Mulan,” where your character, Mushu, wasn’t featured in the adaptation at all. I know you don’t own the characters, but they’re still your babies.

Well, it’s complicated. There’s the old animator one side of me that made the original that thinks, “Oh, why are they messing with it? It was fine, it was popular.” But I’m also a businessman, so I also see why they’re doing it. They’re making money hand over fist by recreating something beloved. That makes total sense. Then there’s another side of me that loves the idea that people care because when they see a Mulan live-action film or a Lion King live-action film, it’s stirring up everybody up to go back and watch the original, and it’s now back into the zeitgeist of culture. For that reason, go ahead make it good, make it bad, I don’t care, as long as it gets people talking about the original. That’s a great conversation to spring up every 20 years.

A recent theory about the Lion King suggests that the skull that Scar holds is Mufasa’s skull, and that Scar actually ate Mufasa after Scar killed him. Can you lend any credibility to that theory?

I just saw that myself. I can’t really speak to that, but my guess is that it wasn’t an intentional implication. I know the process that we went through, and I think that they had bigger story problems to tackle at that time. I have a feeling they weren’t thinking it was Mufasa, but that there had been a ton of lions in that pack, and that they were implying that he may have eaten some of the other lions. I don’t really think that that was anything on purpose about Mufasa. That’s my opinion. I don’t really know.

Outside of starting a studio, do you have any dream projects you haven’t had the time or opportunity to work on?

I’m glad you asked that because that is at the heart of Pencilish. For years I have been developing TV shows and feature films, and I recently made a mandate that I would finally start working on stuff for me. I wasn’t getting any younger, what was I waiting for? So, for the last three to four years, that’s what I’ve been doing. I’ve been working with writers and directors developing projects. I know a lot of friends in the industry that has worked on feature films and TV series and have maybe even developed some of them, but those were for other people. They have had their own properties that they’ve been waiting to do, but they’ve been too busy feeding their family. I want to tap into those people and bring out some of those gems that they’ve always wanted to do. They may have pitched their project to Disney, but it wasn’t a good fit at the time, or some development executive didn’t like it, or they already had something similar in development. There are a million reasons a big studio will turn something away.

As an animation instructor, do you have any advice for up-and-coming animators?

I always tell my students, “I know you want to leave here and have my career and go to the biggest studios like Disney and Pixar and work for them, and that’s great. But also consider that now you have routes that I never had at the time. We all have a distribution system in our pocket right now. Some of you guys are going to go work for the big boys and that’s great, but don’t do it forever. Get that experience, but if you’re a dreamer, start developing your own projects, because I didn’t think like that when I was younger. I was waiting for the bosses to come to me and ask if I had some brilliant idea they could exploit. There’s nothing wrong with Disney. It’s still a great place to work, but some of you think bigger than that.” From day one I get them thinking about the fact that there’s not just one path to success anymore.