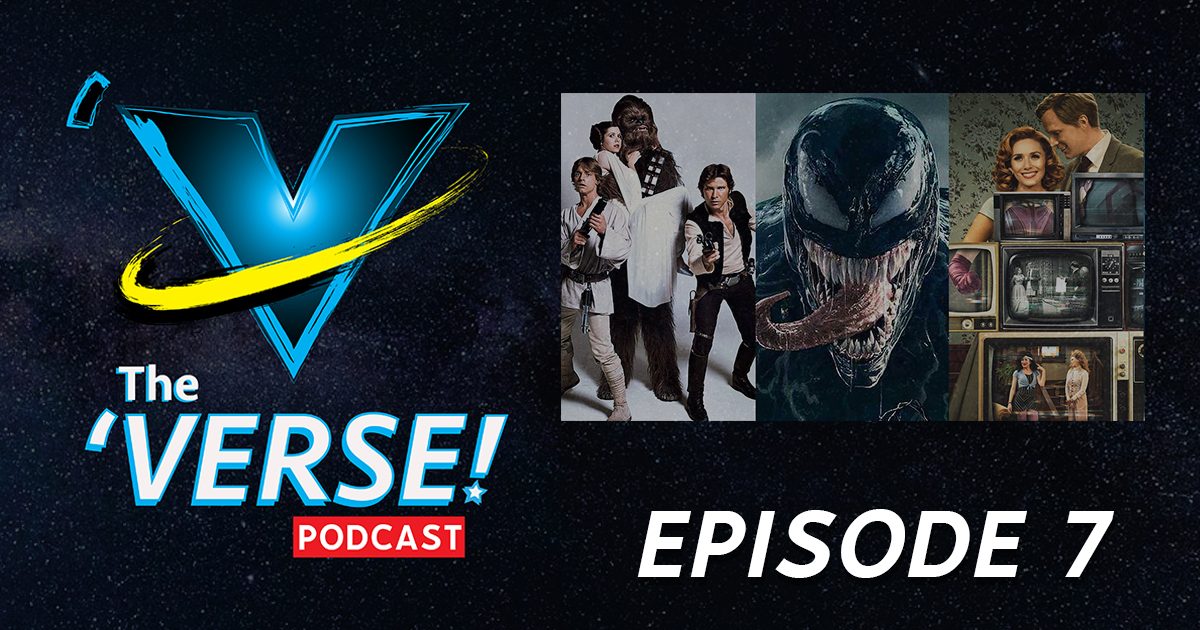 It’s that time of the week to step into The ‘Verse! where we will visit a different corner of the cinematic universes from Marvel, Star Wars, D.C., and now Scooby-Doo (we will revisit this one). This episode we begin our deep dive backward into WandaVision, reveal the ‘Verse Squad Blindspots (this is a doozy), chat about the Justice League’s 4K trailer #RestoretheSnyderVerse, and share a heated discussion as to what is the correct order to watch the Star Wars films – there is definitely an incorrect answer here.

Episode 7 of The ‘Verse! brings new segments that YOU, as fans, can participate in. First, make sure to give us a follow on Twitter @TheVerseCast. Second, tweet at us any and all cinematic universe questions or theories that we will share out loud on our next podcast during the ‘Verse Transmissions. We want to hear ALL of your comments. WandaVision theories or maybe you just want to weigh in on the correct Star Wars movie-watching order. Either way, we want to hear from you and will give you a plug on the podcast.  Next, watch alongside the squad as we uncover our cinematic universe blindspots. This week we’re watching Star Wars: A New Hope since a ‘Verse Squad member has NEVER seen any of the Star Wars films (GASP!) Listen to find out who.

“An unusual couple moved into town” and found themselves smack dab in the middle of The ‘Verse! Episodes 1 and 2 of WandaVision gave The ‘Verse! Squad a severe case of nostalgia as we were transported back in time to the era of black and white television sitcoms like The Dick Van Dyke Show and I Love Lucy. It was here that The Squad expressed a communal and profound love for Paul Bettany as Vision which is why we will now be changing the title of our podcast to I Love Paul Bettany.

Just kidding but come on, who else could pull off getting drunk on bubblegum or performing “Yakety Yak” acapella?? Clearly, we are Bewitched by Bettany. However, something is definitely off about this suburban utopia but we can’t quite put our finger on it yet. Hopefully, we’ll have more answers next week but in the meantime, we’re just going to keep enjoying Paul Bettany as Vision, living his best synthetic life.

We’ll see you in The ‘Verse! It can also be found at these wonderful podcast locations:

In the meantime, subscribe to The ‘Verse! As of this week, we’re also available on Stitcher, iHEARTradio, and wherever else you find your favorite podcasts. Again, reach out to us on Twitter @TheVerseCast or find other content on Screenradar.