What an amazing couple of years for Regina King it has been. Starting with her stirring performance in If Beale Street Could Talk, which earned her a Best Supporting Actress Oscar. Only to be followed by an Emmy Award for her transformative and powerful performance as Angela Abar / Sister Night, in HBO’s Watchman limited series. A 35-year industry vet, both in front of and behind the camera, what will she conquer next? Well, it looks like the answer is directing feature films. The new drama, One Night In Miami marks the talented actresses’ feature film directorial debut.  King impresses with confident and measured work behind the camera that may just place her in the Oscar race for best director.

Based on a Broadway play of the same name and once again penned by Kemp Powers, One Night In Miami is a fictionalized story inspired by true events of the evening of February 25, 1964. On that night, four cultural legends of the African-American community, Malcolm X (Kingsley Ben-Adir), Cassius Clay (Eli Goree), Sam Cooke (Leslie Odom Jr.), and Jim Brown (Aldis Hodge) had a real-life meeting at a motel in Miami, Florida. The film imagines the conversations that took place between the four men in that motel room on the same night Clay beat Sonny Liston to become the World Heavyweight Champion.

The first quarter of the film explores the men outside that motel room through vignettes that take show defining moments in their lives while shining a light on the varying racism they face in the middle of the civil rights era. We witness some of the greatest, most respected men of all-time in their respective fields constantly encountering the vile behavior. The film transports from a championship boxing match, to a club where Cooke is performing for an all-white audience, to the plantation home of a seemingly kind benefactor (Beau Bridges), and into the home of Malcolm X.  While heavy on exposition, these moments are necessary to give a look at the people behind the legends. They set the stage and provide more impact to the profound conversations that follow. It is one of the challenges that King is up against directing this film, reinforcing the ugliness of systemic racism in several different hues while avoiding becoming too instructional.

Once inside the motel room, the film digs deeper into the black experience of the 60s, one which is certainly and sadly still relevant today. It strips away the celebrity statuses to tackle racism from four unique perspectives. No matter your level of wealth, power, or fame the same issues remain. The often verbal sparring revealing the contradicting views of each of the men even though at the core their intentions are the same.

Textured exchanges dissect the issues in a fashion that is much revelatory and surprisingly effective than anticipated. The men do not hold back in criticizing each other, bringing their motives into question. The immediacy of it provides all the tension of a courtroom drama as each takes the “witness stand” to defend their beliefs as they try to make sense of it all. We as the audience are never told where to whom to gravitate or where to stand.

There is an intimacy to King’s direction that places us right alongside the men as they reveal some of their souls. It is almost as if we are eavesdropping. Cinematographer Tami Reiker brings King’s vision to life, making crafty use of the confines of the small, dimly lit motel room transforming it into their personal confessional. The camera angles and framing break free of spatial constraints at times, even if after a while it starts to feel claustrophobic. Luckily there are moments when we escape the motel room and catch our breath both from the tight setting, but also the weight of the conversation. A rooftop discussion reminds us that the quartet is just a bunch of ordinary guys, laughing and teasing each other. Like Cassius Clay in the ring, Power’s screenplay keeps clobbering you with exposition and without these moments it would all be too overbearing.

The performances of all four icons are outstanding. Never once did their characterizations slip into caricature – a tough task when dealing with such big personalities. This is an actor’s film and you have to give a lot of credit to King for keeping the performances relatively restrained while never losing an ounce of their passion. You have to assume that her years in front of the camera helped her to harness these performances.

My favorite was Eli Goree’s Cassius Clay. He lights up the screen with a knock out performance (pun intended) that nails Clay’s energy, ego, youthfulness, showmanship, and doubts. Goree delivers a more fleshed-out version of the man that exudes the spirit of the man, demanding your attention even while splitting the screen with three other great actors. In pitch-perfect Ali fashion, he also provides some much-needed charismatic levity.

Leslie Odom Jr. is passionate and focused as Sam Cooke. And man, can he sing. Even while crooning, Odom Jr. evokes unexpected amounts of emotion that hints at his inner conflicts. As Malcolm X, Ben-Adir is nuanced and reserved; a reflective and brooding performance told mainly through his eyes. Hodge’s Brown is more imposing, carrying his beliefs right on the surface. All four actors carry the baggage of each man’s experiences into the room, making you forget you are watching actors at all.

The film is strongest when the performances cast you in their spell, making each of the men’s experiences accessible and entrancing.  It is both larger than life and deeply personal, simultaneously. The disillusionment caused by racism in America is delivered through four cultural icons. But, the experiences are not exclusive to them. These men could be your friends, neighbors, or coworkers and the frustration and pain would certainly ring true. At times it all feels a little heavy-handed, is certainly talky, and the constraints of the stage origins are hard not to acknowledge, but King’s patient direction holds it all together. By doing so, she lets the powerful themes dominate the center stage, demanding the spotlight from the extreme stature of the four individuals delivering them. One Night In Miami will certainly spark some late-night conversations of its own.

One Night In Miami streams exclusively on Amazon Prime starting on January 15th. 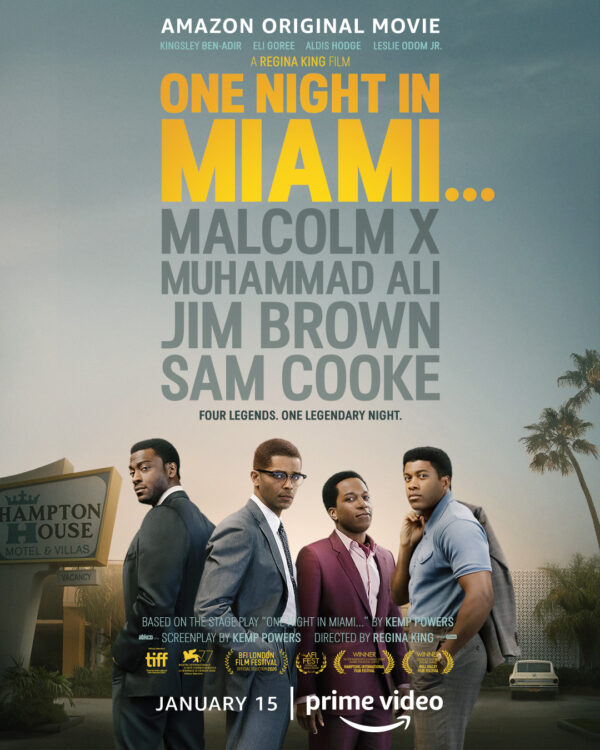 King impresses with confident and measured work that extracts the most from four actors who possess the spirits of their real-life characters.