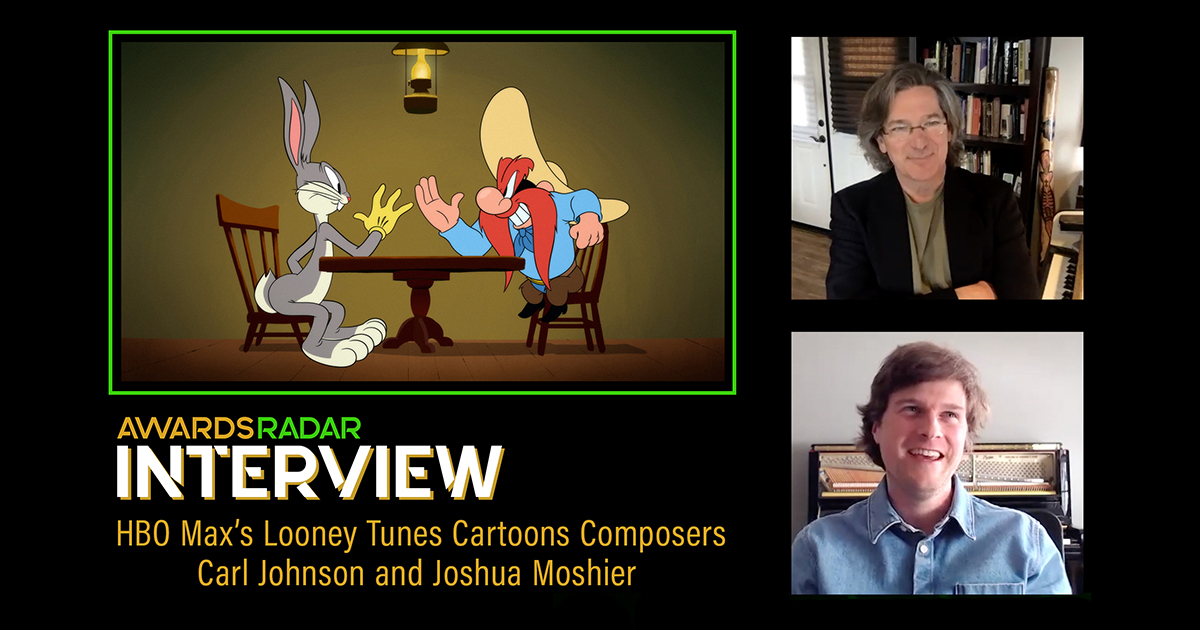 (This interview was conducted by our Jeff heller and was previously published on our sister site, AwardsRadar. Be sure to check them out for film, TV, awards coverage, interviews, and reviews).

Carl Johnson and Joshua Moshier are the men behind the music in HBO Max’s Looney Tunes Cartoons, the new incarnation of Warner Bros.’ animated classic shorts. The seasoned composers were tasked to bring the music of the great Carl Stalling to life, adding their own unique sound to that of the legendary animation composer. We spoke with Johnson and Moshier about their individual approaches to writing, working with a variety of directors, and knowing when to drop an anvil with the music.

You can watch our entire interview with Carl Johnson and Joshua Moshier below. Looney Tunes Cartoons is currently streaming on HBO Max.

Jeff Heller: You are both obviously going to be compared to original Looney Tunes composer Carl Stalling. How do you approach emulating his style while at the same time keeping your own voice in your music?

Joshua Moshier: I think that you learn to create music through emulation, whether you’re trying to or not. For me, I was trying to emulate the jazz musicians that I loved the most. I would practice a Bud Powell solo until I could play it note for note, and then I would try to solo like Bud Powell would solo. You kind of assimilate the vocabulary and then you throw it away and try to be yourself. I think a lot of musicians are able to dial down the space between the existing language and our own inhibited choices. I think that it’s just something that we’re constantly calibrating. On this, I think Carl and I each put in our 10,000 hours of just enjoying Looney Tunes and getting the sound in our ear, so we’re just channeling the energy and the sensibility of it, but we also have freedom. The artists are the same way. Their Bugs is on model, but then they can take that character and really push it and do something extreme and hilarious. When you pause the frame, you see Daffy Duck’s eyes are squares for a second and he’s pulled his head in half. Similarly, for us, it’s like the ‘on’ model is the voice of Carl stalling in our heads, but then we can pull it apart a bit.

Carl Johnson: I think like any other study of art, you’ve got to know the rules before you can break them. The history of composition is the history of ripping off the composers that came before you. It’s just part of growing as an artist to analyze a piece of work that you admire, internalize it and then find a way to say it in your own words. It’s the same in painting. it’s the same in sculpture. For me, having Carl Stalling there as the person who invented the language gives me a place to start. Rather than just starting from a blank sheet of paper, it’s a departure point. Then from there, I can do it the way that it speaks to me. It’s nice to not be totally locked into exactly “What would Carl Stalling do?”

Joshua Moshier: I think for both of us, we love that music so much that it would almost be disrespectful to copy it so closely that you weren’t adding anything to it. Carl Stalling was adding on to a tradition that he had inherited from silent movies, so we have to bring new things to it. It would be selling the craft of it short if we didn’t.

Joshua Moshier: Well, I like that you each director has a different point of view in the way that Looney Tunes always has. You could always tell “This is a Chuck Jones; this is a Bob Clampett.” They are night and day from each other. David Gemmill and Kenny Pittenger and Ryan Kramer and Peter Browngardt- you know what makes these directors laugh and what kinds of comedy they’re drawn to, so I like playing to those strengths. Kenny does these amazing, elaborate, fantastical set pieces that go into abstraction, so when I get one of those, I roll up my sleeves and say, “OK, we have to do something great and deserving of all the time that went into that.” David Gemmell is very into physical comedy. It’s all about the timing. Over time, you learn who the board artists are and the sensibilities they bring. You really respect what they’re bringing to the table, so you just want to play to those strengths.

Carl Johnson: One thing that’s interesting with this show versus some others is that [producers] Peter Browngardt and Alex Kirwan are really allowing the directors to express their own style versus trying to make the directors conform to an overall style for the show. I think part of that is because the Looney Tunes style has already been established and everybody knows what that brand is. So, within that the directors can kind of show some individuality and do their own thing, versus some other shows where it’s all about trying to focus on exactly what the brand of the show is.

JH: I’m curious how each of you approaches “Mickey Mousing,” which is pretty much the foundation of a lot of these cartoons, where the orchestra is acting as a foley artist, punctuating the action How you determine when to pull back and lay off it and when to really push it hard?

Carl Johnson: That’s an interesting question. That fine line between how closely you mirror the images or not is always moving depending on the situation. Part of it is listening to what the sound effects people do. I’ve had the chance to critically listen to the sound effects designer on this and he’s being very careful about which things he hits with which elements. A lot of times, I’m finding it’s better if I just get out of the way. They’ve got this incredible palette of vintage sounds mixed with newer ones. At the beginning of the series, I was catching things musically that I didn’t really need to because I was duplicating a lot of the action that they were doing in the sound effects. As the series has gone on, and I’ve listened to more of the things that he’s done, it’s become a little bit easier to figure out, “Here’s a place where I can lay out and let the sound effect take it,” or “Here’s a place where I know that the music is really going to be funny instead of the sound effect.” So, for me, it’s establishing that balance.

Joshua Moshier: I don’t feel a mandate to hit anything. Just make a funny choice. Make it feel coherent and tuneful because there’s a thread of a tune. That’s why it’s called Looney Tunes. You’re just connecting this line from the beginning to the end. Similarly, I was hitting a lot more at the beginning of the show because I didn’t necessarily know what choices the sound designer was going to make. Pre-COVID, we would be at the mix and we could mute the music and put the sound in, and you could have a conversation. We were kind of just getting to know each other’s sensibilities. Now, we don’t really need to have that conversation. I can just make a choice. When I’m sketching, I’ll leave that space clear, and then when the sound designer gets the music track from me, he’ll know that I left that space. I think it would have been harder to start this show in the pandemic, but since we had a solid year-plus of lead-in, it allowed us to build those relationships with the different moving parts in the show.