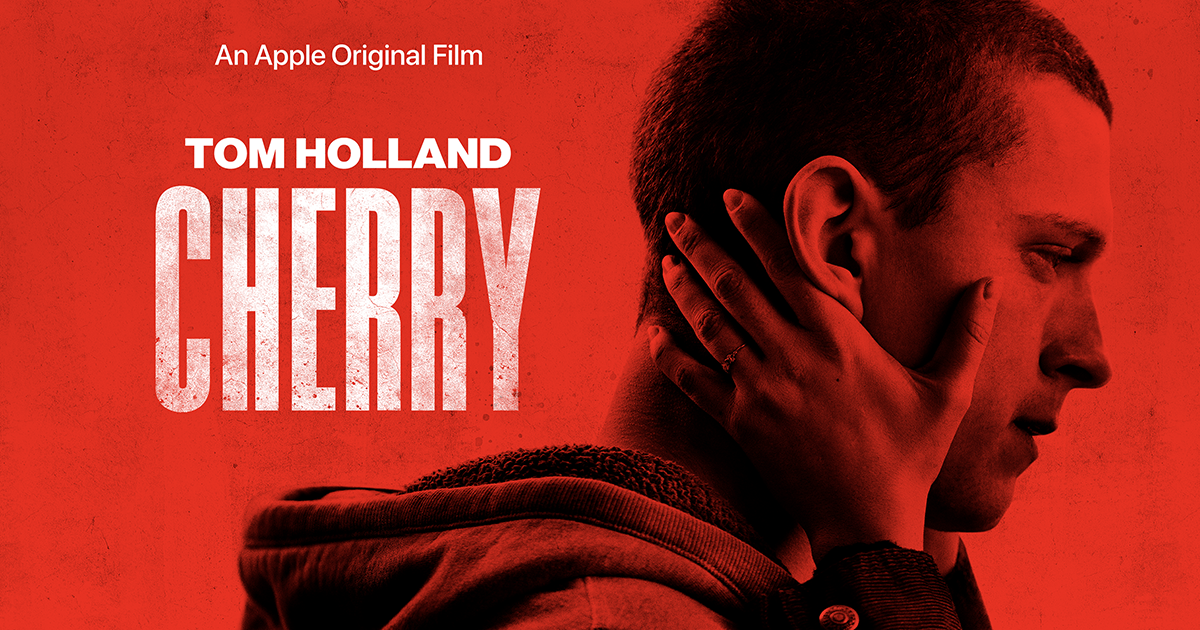 Most people know The Russo Brothers’ (Joe and Anthony Russo) work but maybe not their names. They were handed the monumental task of helming the Avengers Infinity War and Endgame films. After almost twenty preceding films building up to that point, these two films were the culmination of decades of work, dozens of characters, and numerous storylines. When all was said and done the general response to the band of superheroes saving the universe from the clutches (better yet, snapping fingers) of Thanos was quite positive. With Cherry, the brothers take on a film with a much smaller scope. Sadly, the results this time are not so super.

I do not judge a film by its running time. But as the great Roger Ebert always said, ‘No good movie is too long, and no bad movie is short enough.’ With the Russo Brothers at the helm and Tom Holland involved the 141-minute running time seemed like it would be a blessing. After about 20 highly stylized minutes smothered in voice-over I realized this would lean to the latter half of Ebert’s wise saying.

Based on the novel by Nico Walker, the film pushes Holland beyond any previous work. As Cherry, he is an aimless young man who struggles to find a path in life. That is until he meets Emily (Ciara Bravo) an equally lost girl who he instantly falls for. Their relationship is not your standard love affair and leads to Cherry abruptly enlisting in the Army in the middle of the second war in Iraq. The experience is anything but positive. A better description would be Hell.

Throughout a basic training chock full of unbounded toxic masculinity, then onto the battlefield where the horror these young men face is well documented, Cherry is bombarded with darkness. He returns to the USA with dreams of being seen as a war hero in the most selfless of ways. Instead, he is traumatized and broke. PTSD cripples him and is destroying his mental well-being and his relationship.

To get through the night terrors, mood swings, and constant anxiety, Cherry relies on opioids. Readily available and with doctors armed with pen in hand to prescribe them, the usage goes from reliance to addiction. It is a sad path that plagues America. As happens way too often in real life, Emily, trying to deal with Cherry’s struggle, plunges into the same depths of addiction. The pair’s descent takes them down some dark alleys in search of their next high. It ultimately becomes a high-at-any-cost relationship leaving them as shadows of who they once were.

The film has a lot going for it, mainly the performances of Holland and Bravo, but it stumbles badly under the weight of excess. The horrors of war, the cautionary drug tale, and their tumultuous relationship give the Russo plenty with which to work. The problem is they try to tackle it all and forget to leave any on the cutting room floor. Hence the 141 minute running time. Even as Holland and Bravo give it their all, their efforts are lost in layers and layers of overindulgence. If this film is supposed to be a cherry pie, the Russos went overboard with toppings. Instead of keeping it simple, they topped it with whipped cream, hot fudge, sprinkles, and heaps of slo-mo infused with opera music and tossed it all in a blender. Who puts toppings on a cherry pie? These guys.

The results a disjointed film that is not confident enough in its story or actors. The fourth-wall-breaking voice-over was a tip-off; grating and overused. Like much of what we see here, it feels like a remnant of a bygone era of film. Do not get me wrong, it can work at times as seen in last year’s Enola Holmes. Charming. When used in Cherry it is just another tool in this Swiss Army knife of a film. What we needed is a knife. What we got was excessive editing, visual effects, odd POV shots (including one from inside Holland’s anus looking out), and more.

Still, the “knife” does exist. After a special effects reel extravaganza and an overlong warfare chapter, the film does kind of finds its stride with the last hour. Too bad it is after we have been beaten into submission by the sloppy first 80 minutes. Yep, 80 minutes! The film’s biggest crime is its running time. If the slow-motion shots alone were even played at regular speed, you whittle it down by a good amount.

By trying to be too poetic we are left with an endless rhyme that thinks it is Shakespeare. It is part Requiem for a Dream, Hell or High Water, Full Metal Jacket, and probably several more. It tries to be so much at once that it lacks a defined soul of its own. Several times (fake porn mustache I am looking at you) it almost hits parody levels. I feel like I am piling on here. I truly am not. There really IS a lot to like. Another round of editing that cut at least 40 minutes and one extendedly-used opera song, and it could work. As is, the focus is blurred.

The moments of uninterrupted dialogue, especially between Emily and Cherry, are when the film works best. Their spiral into drug addiction is effectively tough to watch. The Russos capture the manic loss of control over your own actions. A cycle of drugs and withdrawal and more drugs that can only end in prison or death. In addition, the bank heist scenes are heart racing. There are some great pieces here. I was particularly fond of any scene that includes Cherry bungling friend James Lightfoot (Forrest Goodluck). He supplies some welcome laughs, especially in a scene where the trio attempt to acquire drugs from a pesky safe.

Unfortunately, the over-produced elements in between sours this cherry. Stylization for the sake of it. Cutaways, flashback, unnecessary camera angles, and the crowbarred in special effects. That’s just the tip of the iceberg. I am not telling you to flat out avoid Cherry. Do so with caution. If you do watch, since it is delivered in chapters, you may just take it on in bite-sized pieces. Just expect some overpoweringly tart moments and plenty of pits.

Cherry is available to stream in Apple TV+.

You have to give the Russo Brothers credit for taking chances, but the overbearing style sours this Cherry.