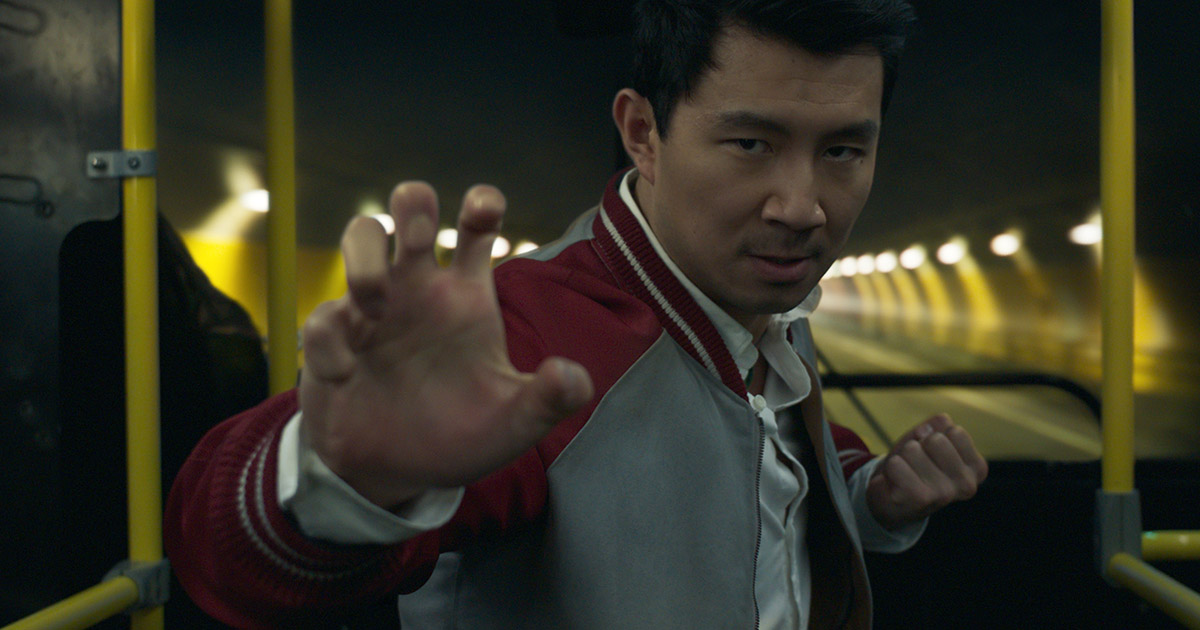 There are those films that you walk out of and immediately want to walk back in and watch again. That was my experience with Marvel’s latest films, Shang-Chi and the Legend of the Ten Rings. The funny thing is I personally never would have expected that to be my reaction. I also would not have expected it to be so funny. Shang-Chi is the most fun I have had in a theater in months… and I have seen some wonderful movies as of late.

Months ago I would have guessed anything but this reaction. I kind of avoided the trailer only watching with my brain half on (insert rude and insulting joke here – jerks) because I hate spoilers. And while my Squad of pop culture superhero hosts from my podcast (The ‘Verse!) were all talking about how great it looked, my reaction was much more tepid. It looked to be a martial arts heavy and light on that Marvel magic that makes watching their films such a rewarding escape. Boy was I wrong!

Again, like with The Green Knight, perhaps my tuning out for the trailer helped my experience. I knew essentially nothing going in. The film opens with a lengthy explanation of the legend of the ten rings. It is a little on the long side for my taste. Since I was meeting these characters and learning their stories in real time, it was kind of necessary. It is when we meet Shaun (aka Shang-Chi) and Katy (Awkwafina) that the film really takes off and boy does it ever.

The film is set in 2023, post Blip, post-WandaVision world. Mild-mannered Shaun (Simu Liu) and his bestie Katy are working as valet drivers in San Francisco. While Katy’s family think they are not meeting her potential, she is quite content. All is well in San Fran until Shang-Chi’s past comes back to find him, literally. His father, Xu Wenwu (Tony Leung) and his menacing army of the Ten Rings, who Shang-Chi has been hiding from for years, are after him. This sends him and a very-surprised-to-learn-all-this Katy across the globe to find the only person who can help protect him from his father.

A good amount gets established pretty early in the film while keeping plenty to explore and reveal going forward. It is this pacing that director, ‎Destin Daniel Cretton (Short Term 12) sets that really works overtime to keep us engaged. As you anticipate a slowdown, reveals continue throughout, big and small; new lavish locales and a few familiar faces – both those already established in the MCU and others iconic film icons like Michelle Yeoh. (As I said, I didn’t watch the trailer really so you may already know who appears, but I won’t ruin too much for those who don’t).

I must talk about the big bus set piece used to reveal Shang-Chi’s superhero identity early in the film. It is one of my favorite fight scenes I can remember – a kinetic ball of kick ass energy that had me transfixed. It is not only the jaw-dropping fight choreography that works, it is also an awesome way to reveal the character’s powers. Marvel does a great job transforming regular folks into superheroes – set up expectations then subvert them. I think the only person who was more shocked by this was Awkwafina’s character. It is a nice addition to the year of the bus fight scene (check out Nobody with Bob Odenkirk). For someone who typically gets bored during fight scenes, I was locked in here. That outstanding fight choreography is steady throughout the film. There are numerous fights they all had me captivated.

Simu Liu is a very welcome addition to the MCU. He has an easy-going charm to him which works perfectly for his character. He is the most relatable Marvel superhero and certainly near the top of my list of those I would love to just hang out with. Fans are going to love him. Awkwafina on the other hand… is fantastic (gotcha!) The relationship between Katy and Shang-Chi is strictly platonic. That is quite refreshing and it allows for her character to be developed and have an arc of her own.

My fear when seeing Awkwafina in the cast, was that she would just be a sidekick or used for comic relief. That is not the case. While she has great chemistry with Shang-Chi and delivers some hilarious lines, she also stands alone as her own character. This isn’t part due to the fact that we see beyond their superhero existences and Get a couple of really nice scenes that have them interacting with friends and family. It is a small touch, and it works well – especially in this film which is all about family.

Speaking of family, in addition to his daddy issues, we also meet Xialing (Meng’er Zhang), Shang-Chi’s sister. She adds to a complex family dynamic that is already full of twists. Zhang throws her share of punches as well as kicks and adds a new level to sibling rivalry. It is this family element that makes the save-the-world level stakes and makes them more human setting the stage for more emotional depth than. Florian Munteanu, who reminds me a little of the great Bond villain Jaws, plays a good meanie with muscles. And Fala Chen, Ronny Chieng and Zach Cherry all make memorable appearances.

As you may be able to tell, I am tiptoeing around a lot of the film’s best aspects. I will say this, Shang-Chi really surprised. Not only with some of its surprises and reveals, but also it’s humor.  This is possibly the funniest film in the Marvel universe. I am sure people will challenge me and I will stand by it. The volume of jokes is not as high as Ragnorak, actually the tone is often quite serious. For me it is all about the quality of the comedy. This film has THE BEST call back I can remember. I do not laugh a ton – I tend to internalize my laughter or let out a less than pleasant nasal snort. During Shang-Chi, I literally laughed out loud with big audible guffaws. I was Robert DeNiro’s character in Cape Fear, laughing obnoxiously.  As we left the theater, the first thing my daughter said to me was ‘you were laughing a lot!’

Unlike ‘Black Widow’ which felt disjointed and more crowbarred in, Shang-Chi‘s entrance into the MC you is smooth as a come. I didn’t know we needed him, but he is the missing puzzle and fits perfectly into this universe. Shang-Chi is a hero I will be rooting for big time. I cannot wait to see more of these characters.

A lot is being made of Shang-Chi being the first Asian American superhero. My question is, what took so long? Representation should not be an event – it should be the norm. What I like about Dave Callaham, Andrew Lanham, and Cretton’s screenplay is how it unfolds. This is not a lesson on Chinese culture. While I have no problem with that, this is a Marvel film and most audience members are not looking for a history lesson. Instead we learn about the characters and their culture in a more natural way, as if hanging out with friends – they have their similarities but also their differences.

They are just cool people first and that is important. It is because of this that you want to get to know them – to learn more about their past, traditions, culture, language, etc. From my perspective the film avoids the walking stereotypes and the one dimensional characters that are usually assigned to many asian actors (or honestly most people of different ethnicities. We are presented with a much more vibrant and interesting world (albeit a Marvel world) full of people that only made me curious to learn more about them. The screenplay does acknowledge some of the day to day racism and uses it to teach instead of scold. It is a step in the right direction, but until we stop having to celebrate representation and just do it, we still have a ways to go.

There is so much to love about this film that it was hard to cover all of it, especially as I try my best not to (a real catch-22). Shang-chi and the Legend of the Ten Rings is full of interesting characters, beautiful locales, incredible action/fight scenes, amazing visual effects, an impressive soundtrack, some very well-deserved laughs, and non-stop excitement. Sure the last third gets a little heavy on CGI and even though Marvel’s formula begins to peek through, that is not enough to keep this superhero down. Shang-Chi is one heck of a great time that MCU fans will have a blast seeing. I cannot wait to watch it again.

Shang-Chi and the Legend of the Ten Rings is in theaters now.

‘Shang-Chi and the Legend of the Ten Rings’ delivers some real comedic punch. One of the most exciting and funniest Marvel films yet.