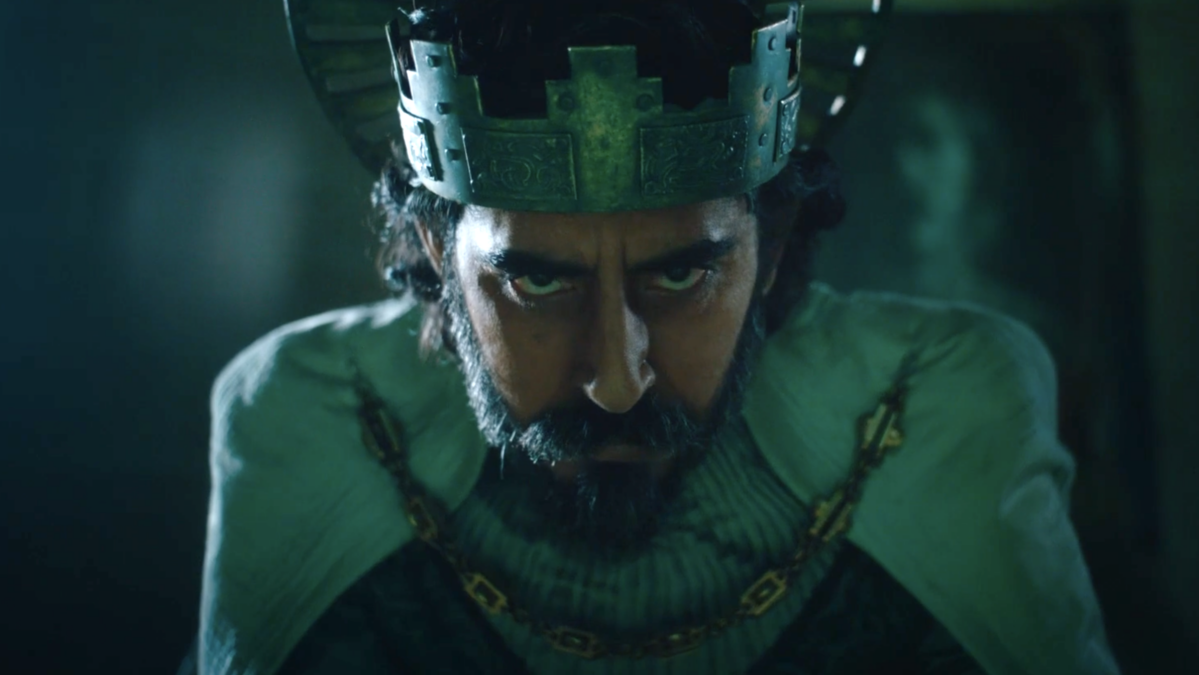 “I don’t have a story,” says Gawain (Dev Patel) —not yet. Understandably, that lack of a story, more than anything, drives the quest at the center of the film. The Green Knight is a dark and moody tale of a man looking for his place in the world. Thought his own overenthusiastic ambition could be his downfall, setting him wandering with blind agency in the most mesmerizingly epic in years.

Speaking of blind. I must note that I came into this film completely blind. Long ago I heard of this proposed Dev Patel film directed by David Lowry about a knight and I was sold. That was all I needed to hear. And, honestly, if you are in the same situation, I advise you to do the same.

To be clear, I did not even realize until well into the film that is was derived from The Tales of King Arthur. While not a complete blindspot, lets say that the Arthurian legends are blurry on a good day. So my not connecting the dots was of little surprise to me. If I did not produce a weekly podcast (The ‘Verse! – you should really be listening to it – #shamelessplug) about comic book/superheroes, etc., I would have assumed this was part of one of the major comic book universe. So be warned, my insights about the faithfulness to the source material will be limited to non-existent. If you want those, go track down your AP Lit teacher.

On Christmas day, as the King’s court gathers, a mysterious Green Knight appears with a challenge. Whosoever is willing to step may strike an uncontested blow against the knight to whatever extent they so choose. A year later they must travel to the Knight’s Chapel where he will then return the favor. When proposed, no one steps up to the challenge, neither knight nor the frail King (Sean Harris) or Queen (Kate Dickie). Instead the most unexpected of people steps up to the challenge, the King’s nephew, Gawain (Patel), a headstrong but inexperienced young man who knows not what challenge he excepts. His enthusiastically and poorly thought out decision sets him off on an epic adventure to prove himself before his people. Along the way he encounters bandits, mythical creatures, ghosts and more.

This film is poetic in its delivery – something that will probably divide audiences. While enthralling it takes its time to unfold and does not deliver the straightforward answers. Watching takes effort and thought. Writer/Director James Lowry who already had one masterpiece under his belt with A Ghost Story delivers again with another contemplative and existential film that delves into the core of the flaws of the human drive. It carefully dissects and exalts its hero all through a very judgmental lens.

Patel is simply captivating here. A career-best performance from an actor who has already built quite a filmography. He delivers a natural and innate performance which, through its layers and nuance, conveys the inner conflict, doubts and ignorance of the character. On the exterior he tries to carry himself as bold and strong, but it’s his eyes that betray him. They give access into his soul where we find the internal contradiction – fears and weakness – a boy in a man’s (and woman’s world). Patel does not deliver a wrong note – reinforcing his position as one of the top must-watch actors working today.

Strangely, as reflect back on the film, I feel that my lack of knowledge may have added to the immersive experience I enjoyed. And what an experience it was. It felt like reading a great novel where the story unfolds slowly and purposefully. For viewers like me, the quest being a complete unknown relieved me of the burden of comparing how faithful it remained to the source material. I was able to become fully immersed in an original experience. I guess you can say my ignorance added to my bliss. 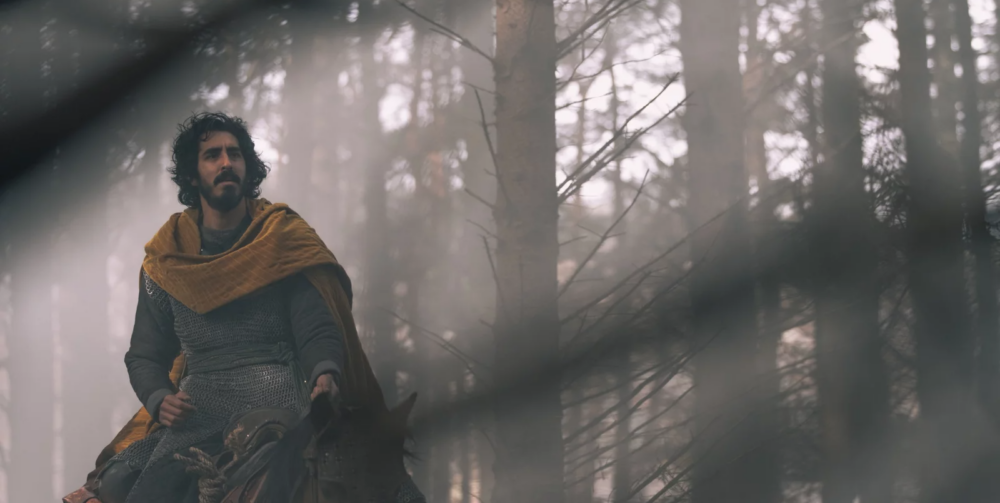 It was enthralling to see this young man’s quest revealed to me as they were for Gawain himself. Rich with detail and overflowing with intrigue around every corner – extravagant costumes, gorgeous settings, and luscious woodwork surround the characters at all time. These intricacies and many more are seared into my brain – forever to be synonymous with the story of The Green Knight. While often sparsely populated, each element looks to be hand crafted.

Andrew Droz Palermo‘s cinematography is often simple in its composition but profound in its execution. For much of the film raw, natural light wraps around its subjects providing a heightened realism. Then unexpectedly bold swatches of color are creatively combined with the lighting to deliver not only some of the most gorgeous shots of the year. They also add a near dreamlike quality that enriches the narrative unfolding before us . Both realistic and reminding us that this is literature come to life after all.

It is Lowry’s patience that made A Ghost Story so impactful and he displays that patience again here. While the film is not fast-paced, I would not call it the slow burn either – more like a deliberate burn. It is for this reason that I will not recommend this film to some people. Not everyone will “get” it. But those who do will appreciate it the craft on display. The camera is classically used avoiding moves that are overly showy, avoiding breaking the spell the film casts.

There are no instances of instant gratification to be found. We are treated to contemplative and dreamy imagery without any handholding. Well-staged long takes are used skillfully, encouraging the audience and granting them the time to process what is being presented. The calculated approach allows viewers to take it all in, to explore and consume every inch of the frame. A couple of times the camera pans 360-degree, starting and finishing in the same place – as it does it presenting additional details to explore. This is pretty low-tech in nature, but incredibly effective. Underneath all the visuals is the haunting and evocative score by Daniel Hart that enriches everything delivered on screen. 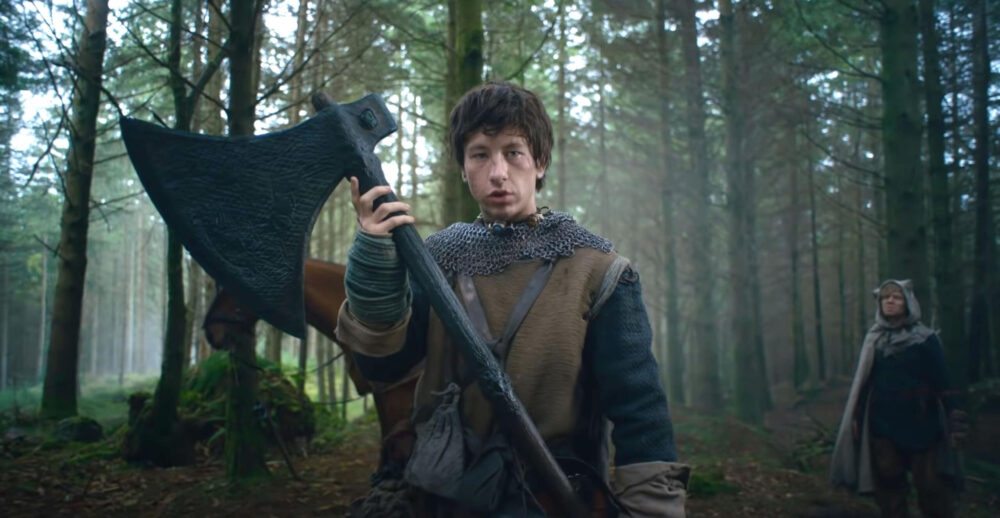 In addition to Patel is an experienced cast who each add to the mythology. Alicia Vikander makes the most out of her dual role that had me questioning if it was even the same actress. Sean Harris and Joel Edgerton feel almost too at home here. And Barry Keoghan does his thing injecting a feel of unease every frame he is on screen. And Ralph Ineson as the Green Knight is at the same time menacing and kind of pleasant. None of the characters are overwritten, but all add depth to this story in ways I did not anticipate. Lowry builds them using limited dialogue, with each spoken word carrying more weight. This is nowhere near a silent film, but it is mercifully not talky.

The Green Knight is a special film that needs to be seen if you are a fan of the King Arthur legends or not. Lowry set out to deliver a dark, complex, and haunting fantasy, full of incredible visuals and performances – he succeeds. The film filled me with awe, providing surprises, mystery and intrigue throughout. (All of which I saved for you to experience.) It took me back to being a kid watching The Neverending Story surrendering myself to a journey into strange lands. I was under its spell from the opening moment to its spectacular closing. This is a film I look forward to seeing again to unlock more of the allegorical elements while taking in all the visual majesty. 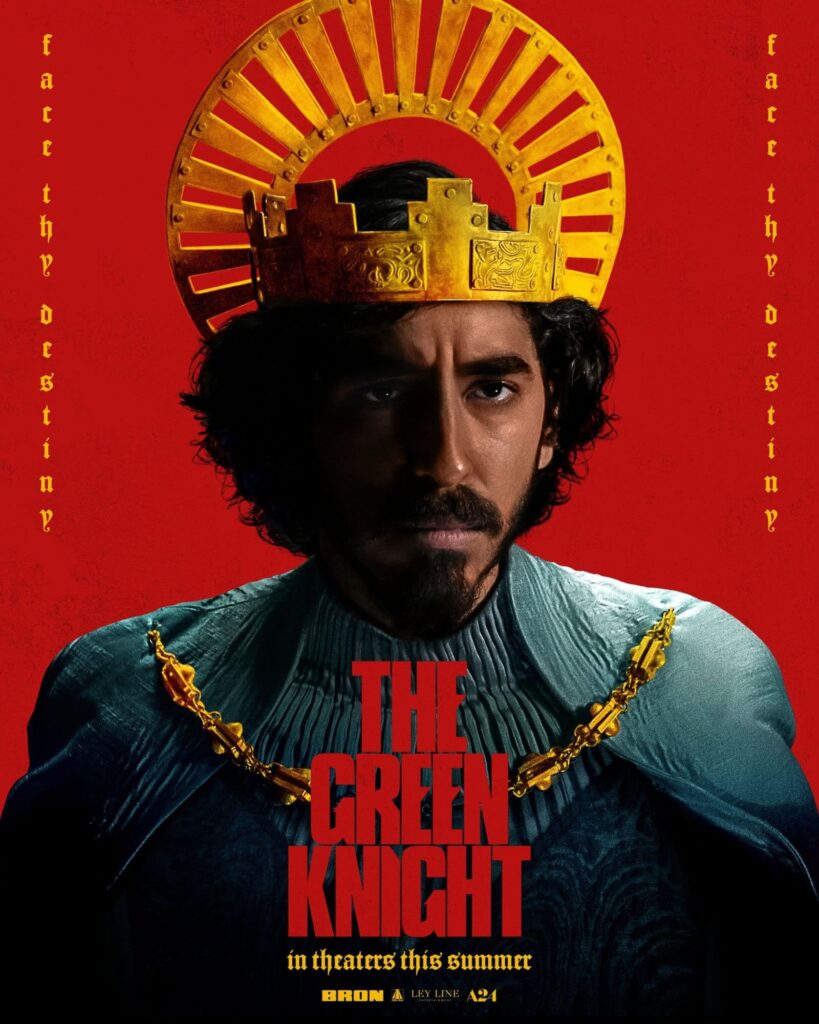 The Green Knight is a special film that needs to be seen if you are a fan of the King Arthur legends or not. Lowry set out to deliver a dark, complex, and haunting fantasy, full of incredible visuals and performances – he succeeds.