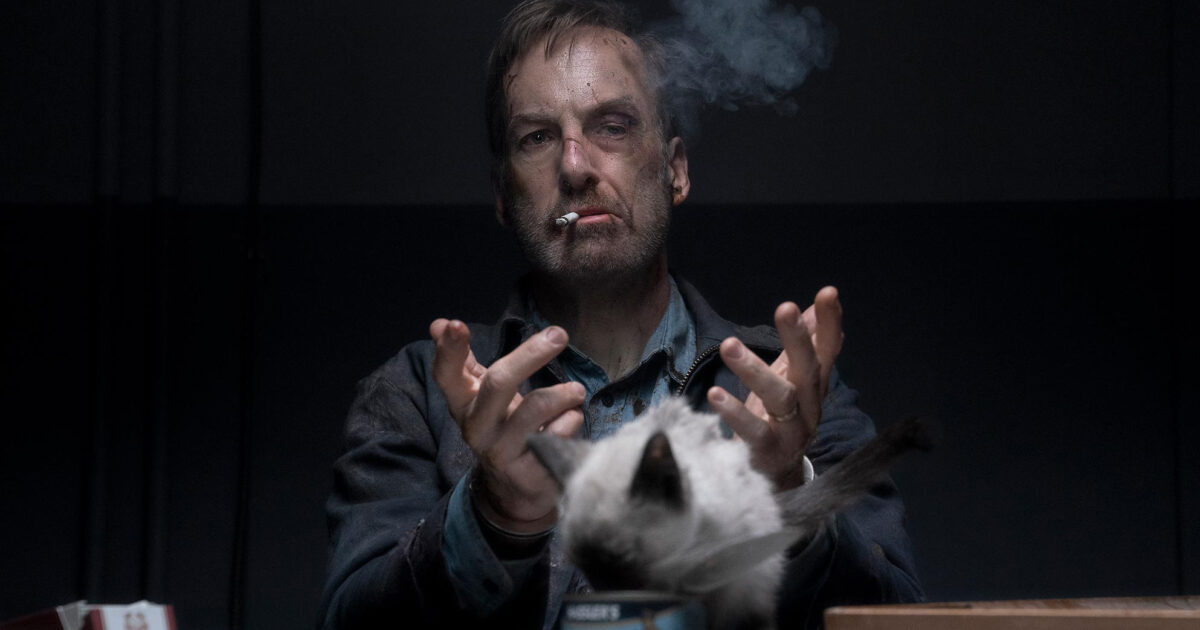 This article, written by our critic Steven Prusakowski, was previously published on our sister site, AwardsRadar. Be sure to check them out for film, TV, and awards coverage, interviews, and reviews.

If there’s anything Bob Odenkirk is not, it’s a nobody. Still, that’s the one word his character repeatedly uses to describe himself in his latest film Nobody. The actor has been around for decades and over 100 acting credits. Not until his work on one of the most popular shows of all-time, Breaking Bad, did he earn his current level of recognition. He possesses very unassuming common man qualities, attractive enough but not memorably so, average height and body size – he looks like your mailman or the neighbor who is always watering his yard. It is probably one reason why he has be cast time and time again.

He has proven to be a chameleon of sorts, one who effortlessly blends into the roles, both comedic and dramatic, with what appears to be greatest of ease. Anyone who has seen his work in Better Call Saul knows just how skilled of an actor he is. Yet, even for fans who know how talented his, his latest role in Ilya Naishuller‘s Nobody must have come as a bit of a surprise, to say the least.

You see, this time the often funnyman takes on a new role, that of action hero. Yes, that’s right, Bob Odenkirk, action hero. He stars as Hutch Mansell, a father and husband pushed to the limit and forced to defend his family. The role is an unexpected turn for the sub-six-foot, fifty-something actor who is known for making people’s guts hurt from laughter rather than punches. He’s made a career of talking his way our of tight situations. Now he’s fighting his way out.

Like Odenkirk, his character Hutch, has qualities of a chameleon as well. He describes himself as “a good man, a family man.” He’s the kind of guy who is so unremarkably common that he almost disappears into the surroundings. A craftily edited sequence early on exposes the rhythmic mundanity of his domestic suburban life. Think a much more humdrum version of Requiem for a Dream‘s drug montages. He appears to be almost invisible at times. His wife repeatedly pours herself all the morning coffee and the garbage truck does not acknowledge him even as he tries to wave it down with a full garbage can in tow. He truly is a nobody.

The ordinarily boring routine is jarringly disrupted up by some burglars. They break in carrying guns threatening the sanctity of the Mansell home. An opportunity arises to turn the tables on the intruders. Instead of delivering a beat down, he gives them the opportunity to leave. They escape with a few dollars, Hutch’s cheap watch, and his dignity. His unwillingness to take on the intruders leaves him looking weak in the eyes of his wife (Connie Nielsen) and his ever so disappointed son (Gage Munroe).

His own frustration over his handling of the situation clearly eats away at him. That is until the moment he realizes the thieves got away with his daughter’s kitty cat bracelet. That is when a switch is flipped inside him. He is like a recovering addict looking for an excuse to start using again. Hutch finds justification to revisit a version of himself that has lied dormant for years. A side he may miss and fear equally. He seems to know that once unleashed it may be impossible to bottle that genie again.

He quickly transforms from the unremarkable nobody in the room into that certain somebody you don’t want to mess with. It is a transformation evident in both his attitude and body language. A man dulled by life remembers just how sharp of a blade he once was. With the passive mild mannered Hutch is cast aside and the aggressive ass-kicker is let loose. And, it is wild vicarious wish fulfillment for every person who ever felt like they were disrespected.

This new persona does not feel like an ideal fit for Hutch (or Odenkirk for that matter) but quickly proves to fit like a glove. Odenkirk, who trained for this role for over two years for the role, puts on an impressive display of fighting prowess. The same guy who pitch perfectly played the cowardly Saul Goodman/Jimmy McGill on Saul and Breaking Bad, is suddenly dishing out cans of whoop ass on would be assassins with ease, as if they were a group of unruly third graders.

The numerous fight scenes are staged in entertaining, violent and inventive ways that keeps them fresh. Hutch also has a slew of MacGyver style inventions to take down an enemy. Like a deadly Home Alone. You wonder just how each will turn out. One incident begins with Hutch standing up for a young woman being bothered on a bus. It end with a half dozen thugs on an empty bus turns into a flurry of punches, kicks, knife work and swinging pipes. When the dust settles the end result reveals broken teeth, noses and bones with six thugs down for the count, as Hutch shuffles away. He is bloody, beaten and still ready for more.

Like most action films Nobody requires some suspension of disbelief, but the ease to which it comes can be credited to Odenkirk’s physical handwork. The ease which he slides into the role is impressive but the success truly rests squarely on the script and his acting. Luckily for him, Derek Kolstad‘s screenplay is patient, taking most the third act to develop Hutch as a character – not just a fighting action figure. Where he could easily have been one dimensional, swallowed up in action sequences, but there’s more depth here. Odenkirk keeps you under his spell, like Saul Goodman himself, selling you on the idea that this rage filled family can handle his own against the greatest of odds.

Running at an efficient and smooth moving 91 minutes, Naishuller finds ways to inject plenty of style into the film. The clever fight choreography is complemented by the slick editing by William Yeh. Cinematographer Pawel Pogorzelski‘s often elegant work elevates the film’s look in unexpected ways, injecting hints of noir at times. The inspired soundtrack captures the breadth the Hutch’s identity crisis. Some tracks are pretty on the nose, other are served up with the welcome wink of irony. Uplifting tunes like Steve Lawrence’s “I Gotta Be Me” and Louis Armstrong’s “What a Wonderful World” grace the speakers. They are juxtaposed against an excessively violent rumble on screen. Every needle drop a helps to strikes a tone that tiptoes the line between serious and farce.

Dark comic elements poke their head in the strangest of places. They effectively neutralize the impact of what some of the surprisingly disturbing violence. Some of the biggest laughs come from screen legend and personal favorite, Christopher Lloyd. He plays Hutch’s father, Pops, a retired FBI agent who at 82 still has the skills to handle himself. Lloyd is a welcome addition who hasn’t lost a beat. When the pair share the screen with Hutch’s half-brother Harry, played by Wu-Tang rapper RZA, the film reaches its peak enjoyment level. But it is Aleksey Serebryakov who steals scenes as the psychopathic, crooning, Russian mobster determined to kill Hutch after an earlier altercation leaves his brother in the hospital.

Nobody knows exactly what it wants to be and delivers. It is a witty, wild, violent romp that finds its groove in its mix of stylish action and dark humor. Some people may be turned off by the dark tone and surprisingly high body count. But it works for one reason, Odenkirk is king! His conviction is undeniable. He delivers on a role that seems so against type it simply shouldn’t work. He is relatable and charming even while kicking butts and smashing faces. Bod Odenkirk action hero is something I did not know we needed. Now that he is here we need more. And nobody is going to tell me otherwise.

Nobody knows exactly what it wants to be and delivers. It is a witty, wild, violent romp that finds its groove in its mix of stylish action and dark humor. Odenkirk is king!

0 thoughts on “Film Review: ‘Nobody’ Showcases A Tougher Side of Odenkirk”