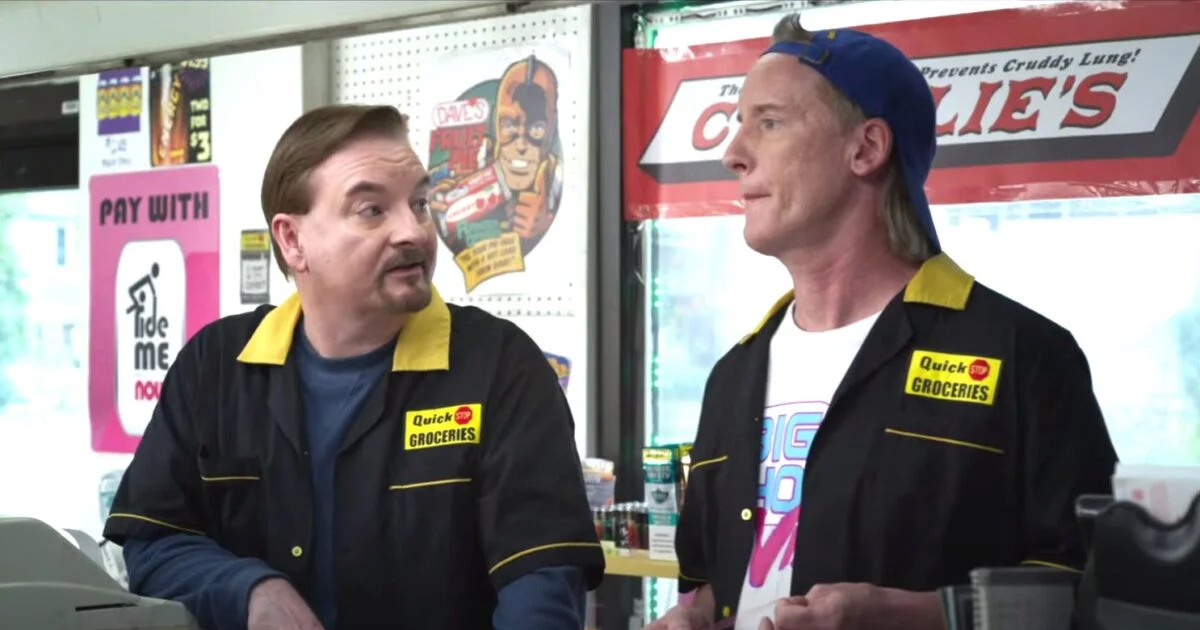 Kevin Smith always goes back to the Quick-Stop. However, just because he’s now returned for a third Clerks outing, that doesn’t mean he’s doing the same thing again. Much like how Clerks II was about growing older and friendship, Clerks III builds upon that, while also reflecting on the career that Smith managed to build. In doing so, Clerks III has a weight that many of his comedies don’t. In fact, it wouldn’t be beyond the pale to call this one a dramedy. In going meta here, Smith is looking inward, but he’s also using every tool in his toolbox not just to make you laugh, but also to make you cry. Admittedly, this is a film that’s more or less made specifically for me, but I found it to be incredibly effective.

Clerks III is, in some ways, the movie Smith was born to make. It overtly references his real life heart attack, while also continuing the story of the characters that first got his career started. The choice pays off in spades, as he’s able to reach emotional highs and lows unlike anything else prior in the Clerks franchise. There’s even a boldness to this storytelling, as he leaves his heroes in places you’d never expect.

Picking up years after Clerks II, Dante (Brian) and Randal (Jeff Anderson) own and run the Quick-Stop. The latter is his acerbic self, mocking their employee Elias (Trevor Fehrman), while Jay (Jason Mewes) and Silent Bob (Smith) have taken over RST Video and turned it into a dispensary. The former, however, is grieving the loss of Becky (Rosario Dawson), who died shortly after the last film ended. Life has ended for Dante, while it’s just the same for Randal. However, when Randal collapses while mocking Elias one day, things are about to change. He’s just had a massive heart attack, and while he survives, he feels like he’s led a wasted existence. Encouraged to help his friend, Dante tries to cheer him up, leading to the spark of an idea…Randal should direct a film.

Determined to make his life mean something by making a movie, Randal decides to recreate the various convenience store adventures he and Dante have experienced. Titled In-Convenience, Randal deputizes Dante to produce his film. Auditions are held, Elias and his friend Blockchain Coltrane (Austin Zajur) assist, and things are going. However, discarding Dante’s life as secondary to Randal’s has rubbed the former the wrong way, leading to an argument with even higher stakes than the friends have had before.

Jeff Anderson and Brian O’Halloran are asked to do more here than ever before, with moving results. Anderson has long been the smart ass and comic relief, but here he has the dramatic high points, which is an interesting change. It’s his most challenging part to date, but he knocks it out of the park. The same goes for O’Halloran, who wears the yolk of his life with all of the frustration you’d expect. As always, they have top notch chemistry. Jason Mewes and Kevin Smith also wear Jay and Silent Bob like an old hat. As for Rosario Dawson, she has some of the best emotional beats in the film. In addition to Trevor Fehrman, other returning players include Marilyn Ghigliotti, while the newcomers include Austin Zajur and many more. Plus, there’s no shortage of terrific cameos, to boot.

Kevin Smith knows these characters like the back of his hand, as well as the event that spurs the plot into motion, so there’s a comfort and familiarity here. At the same time, his direction is as tight as his writing, moving like a shark towards a resolution you won’t see coming but feels exactly right nonetheless. For 100 minutes, you’re in the company of old (and new) friends, not just for the audience, but for Smith the filmmaker as well. It may not the new Clerks story you’d expect, but it’s the one that leads to the greatest payoff. With some great musical cues (“Oh Waly Waly” by Gerard Way, which featured in Tusk, as well as John Gorka‘s “I’m From New Jersey”), he’s at his best here when tugging at your heart. In fact, if there’s something to ding this one, it’s that the comedy is the weakest of the trilogy. It’s very funny, but not quite as hilarious as the last two. The drama, however? Majorly on point.

Compared to the prior installments, this is his most mature work. In some ways, the juvenile humor is included more because of how it’s expected from a Clerks flick than because of the story. Smith has a lot else on his mind and isn’t afraid to have the focus there. Whether it’s essentially re-creating his heart attack or re-creating the making of the film that launched his career, you can tell there’s nothing but passion on display.

In fact, this is, in some ways, Smith’s most interesting film, visually. The re-creations of Clerks, just with the actors at this age, speaks tons about the nature of time passing, as well as works simply as a gift to fans. There’s even an important narrative purpose, which will absolutely wreck some in the audience. This is, give or take Jersey Girl, the most overt that Smith has gone for your heartstrings, and he plays them with aplomb. It’s likely that most who have an investment in these characters will be brought to tears, be they of joy or just because of the emotion of the tale.

Clerks III is my favorite film of the year, so far. For what Smith is trying to do and trying to say, it’s perfect. Smith goes meta here to make you giggle and to break your heart, crafting one of his best movies in the process. It’s meant to be for the fans, but it has invigorated him in a way that’s impossible to resist. I may be an easy mark for Smith, but even so, this is a top tier effort from the auteur. Clerks III is not to be missed!

This review originally appeared on our sister website, Awards Radar.

Joey Magidson is the owner and editor-in-chief of Awards Radar. For nearly a decade and a half, he served as a writer at The Awards Circuit (even back when it was still called The Oscar Igloo). A member of the Critics Choice Association and a Rotten Tomatoes certified critic, his work has been quoted on FYC award screeners, in press materials, trailers, and more. Seeing over 300 films a year, he arguably spends more time with movies than anything else (though the Jets and the Mets come close), but he wouldn’t have it any other way. Joey is proud to bring you Awards Radar, with an incredible staff and content you won’t find anywhere else! @JoeyMagidson