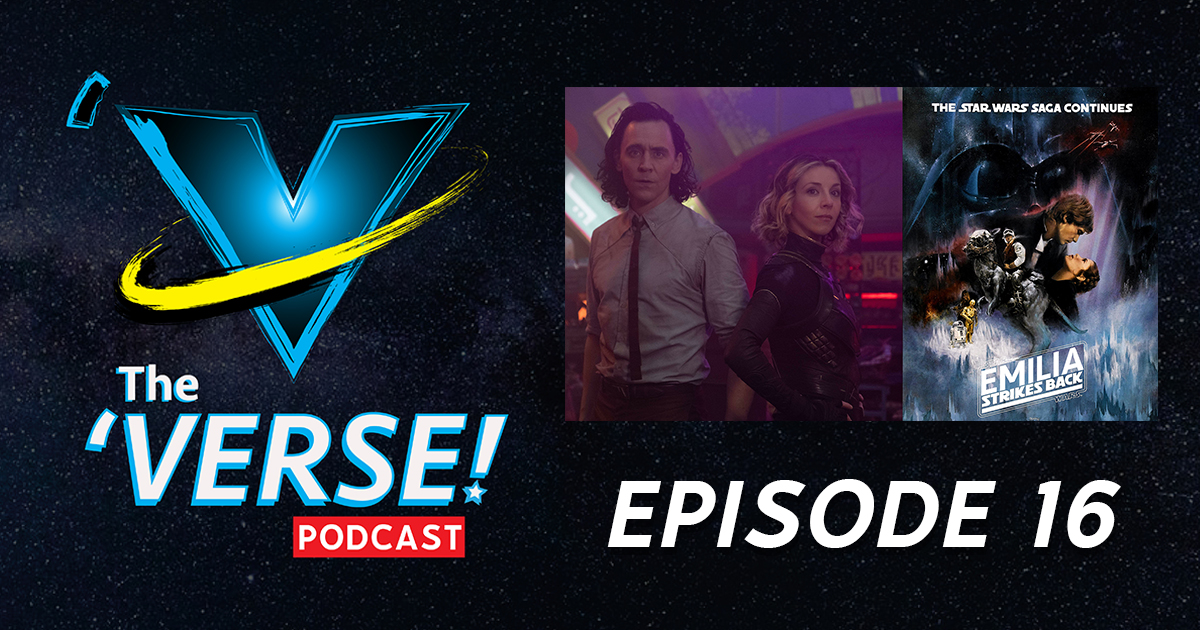 You have reached the uncharted outer limits of the podcast universe. A place known only as The ‘Verse! – a podcast where we visit different corners of the cinematic universes from Marvel, Star Wars, DC, and beyond! Your guides are a ragtag group of co-hosts. Norm, Bridget, Lucas, and Emilia, along with their robotic sidekick Kronsworth, look to entertain, inform, and provide an escape from the everyday grind as they take you through – The ‘Verse!

We are over halfway with our coverage of Marvel’s Loki and The ‘Verse Squad! had a lot to say about Episode 4 of the Disney+ series. Throughout the past few weeks, members of the Squad had been airing their predictions/theories, and let’s just say some of us should’ve placed bets before this episode. As mentioned in previous recaps, Episode 3 wasn’t everyone’s favorite piece of Marvel content but boy oh boy did Episode 4 turn that ship right around. The Squad should probably start reciting “In Marvel We Trust…In Marvel We Trust” because they always find their way back on track to leave us stunned and wanting more.

With a show-stopping ending AND post-credit scene, there are a few points that the Squad would like to bring to listeners’ attention about Loki Episode 4. 1) Owen Wilson is perfectly cast and should win an Oscar for his portrayal of Mobius, 2) Bridget called it, 3) BIG question mark on Loki and Sylvie’s relationship, 4) Bridget called it, and 5) LADY SIF!!!! As exciting as this episode was, however, there are still many many questions that need to be answered before the series wraps in two weeks. In the meantime, make sure to catch up on the ‘Verse!’s Loki coverage and let us know what your theories/predictions are for the final two episodes!

When it comes to the news this week, we weren’t as chipper as we typically are since we paid tribute to Superman director Richard Donner who passed this week and is one of the main reasons we can have a podcast like the ‘Verse! today. We then talked about the cancellation of the HBO series Lovecraft Country :(, Harrison Ford is still injured as he films Indiana Jones 5, oh and the hearts of millions of teen girls broke this week since Tom Holland and Zendaya are now reportedly dating. Who knew the news could be upsetting!?

As we head into the end of our coverage of Loki, make sure to give us a follow @TheVerseCast to share YOUR final theories and predictions of the series, as well as to stay up-to-date with all things cinematic universe news. Also, make sure to subscribe to the ‘Verse! Wherever you listen to your favorite podcasts. You can find us on places like Spotify, Apple Podcasts, Google Podcasts, Stitcher, Amazon and more! You can also find us @ScreenRadar on Twitter, Instagram, and Facebook.