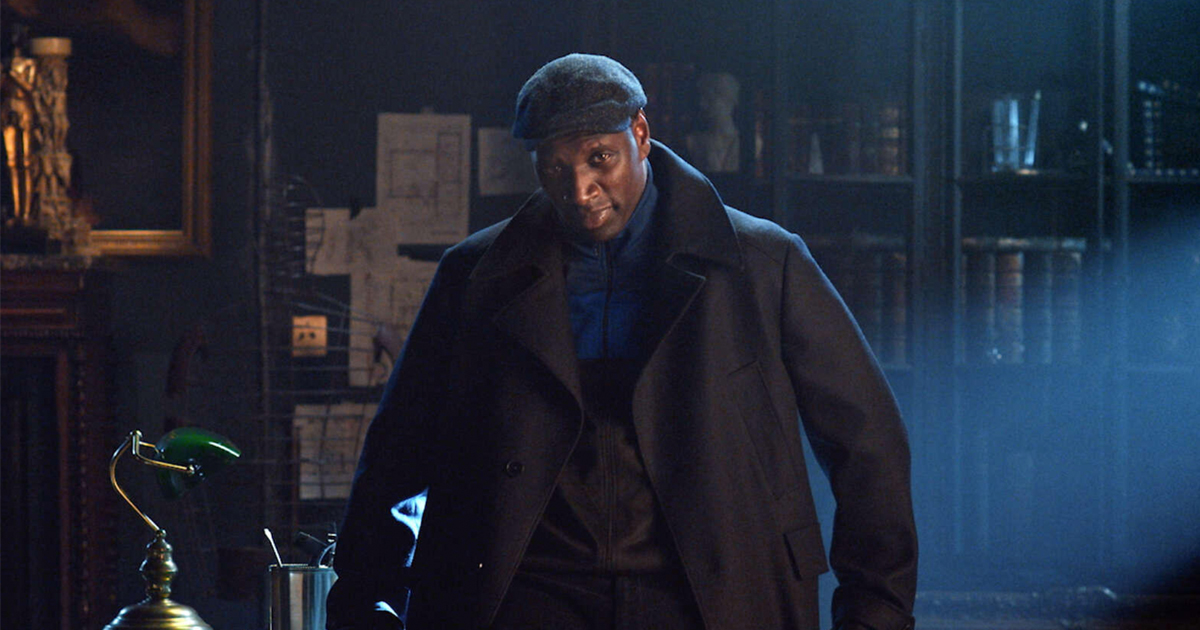 We’re trained by TV and film to scrutinize opening scenes. They’re supposed to tell us everything, set up the tone, the pace, the dominos. It’s the same with Lupin’s first minutes, but not on your first watch.

Warning, there are light spoilers for episode one ahead!

We open at the Louvre, following janitorial staff member Assane Diop (Omar Sy) as he arrives at work through security, suits up in a locker room, and gets to work cleaning exhibits. He stops, intrigued, before a case containing a priceless necklace, soon to be up for auction. Cut to a café. He sits before his unimpressed ex-lover and mother of his child Claire (Ludivine Sagnier). Assane, late on his alimony, vague about his job prospects, promises to be better. Cut to him being threatened by a trio of criminals he owes money to. As he hovers over the edge of a balcony, Assane makes a desperate bid for his life—help me steal this necklace from the Louvre and everyone gets paid. The story comes together, so we think. This show is about a down on his luck loser betting everything on a crazy plan.

As a first-time viewer, you pick up all the wrong details. When you think he’s a janitor showing up for work, you don’t see Assane scrutinizing every detail of the museum, every security cam, every protocol. You don’t notice him folding his receipt into an origami flower at the café, or the look on Claire’s face that isn’t just fed up with Assane, but endlessly charmed, almost trapped by him. These are the details that tell you something real, but you wouldn’t know to look for them until the end of episode one.

Lupin is actually about a man’s fight for justice, in the alluring guise of an espionage thriller. Netflix released part one of this original series in early January and is expected to release part two within the next few months.

The reversal of expectations established from episode one is how this show hooks you, and keeps you hooked. Lupin plays with our first impressions and creates an absurdly likable protagonist that will keep you watching to see how it all plays out. Such a setup immediately complicates Assane, and the show builds on this by layering in an extremely compelling motive, and an aesthetic taken from French writer Maurice Leblanc’s fictional character Arsène Lupin, gentleman thief and master of disguise. Our hero is not only easy to root for, but difficult to root against. You want to suspend your disbelief for him. You don’t care that his plots would be improbable at best in the real world.

When Assane displays a wide array of unlikely skills from makeup and prosthetic application to knowledge of pressure points, you don’t question it. You want him to be that good. You want him to be right at any cost because his story demands justice, and the kind of justice we see all too rarely in real life. And I must stress that Omar Sy plays Assane so charmingly that you probably wouldn’t even mind if he robbed you blind.

Compared to a protagonist at the height of likability, the antagonists, the wealthy and powerful Pellegrini family, occupy the depths of unlikability. Part two is bound to dive deeper into the Pellegrinis because currently, they feel almost irredeemably villainous. The three of them, husband and wife Hubert and Anne (Hervè Pierre and Nicole Garcia) and their daughter Juliette (Clotilde Hesme) are introduced with strong first impressions, and little is done to complicate them. In turn, you get the opposite effect as with Assane. While it is somewhat enjoyable to hate them as we root for Assane, they end up feeling a little lackluster.

Despite some imbalance in the dynamics between protagonist and antagonist, Lupin is rightly characterized by Roger Ebert as “the first great show of 2021.” It’s hard not to love a show where the audience catch phrase could be “The plot thickens.” The structure of each episode evokes the BBC’s Sherlock. Every detail is a clue. The show is satisfying to watch in its own right, but it also rewards TV junkies, those of us who catch the details and take pride in figuring out the plot before it’s revealed to us.

The structure of Lupin also lends itself to strong pacing. Each episode focuses on unraveling another piece of the puzzle, so they’re self-contained, while still pushing the series forward. Layer in a Bond-esque original score with some tastefully placed oldies bangers, and you have a must-watch show on your hands.

Smart, charming, and so much fun to watch and rewatch. May leave you impatiently refreshing Netflix for part two.