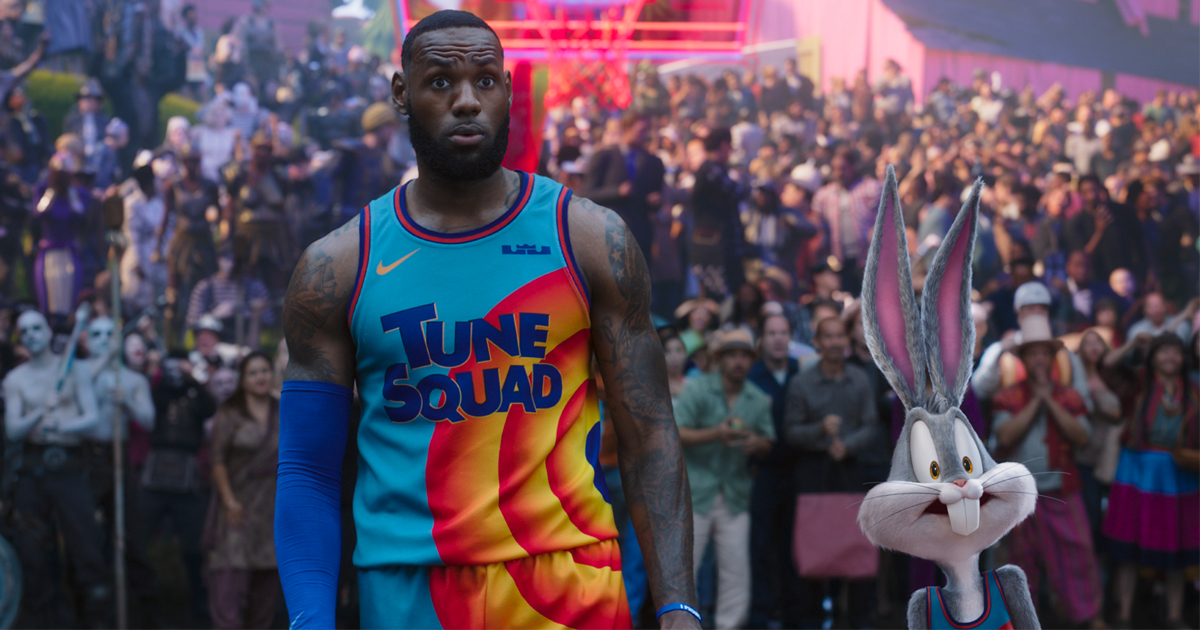 I admit that I’m not the biggest basketball fan in the world. Don’t’ get me wrong, I love sports, but basketball has just never done anything for me. I am, however, a huge Looney Tunes fan. Many moons ago I was pursuing a career in animation, which was inspired primarily by the work of masters like Chuck Jones, Friz Freleng and Bob Clampett. That said, I was torn leading up to the release of the original Space Jam. I was happy to see that the classic Warner Bros. cartoon characters would be seen on the big screen again, but I would have preferred a different vehicle for them.

My biased aside, I wasn’t a huge fan of Space Jam. As likable as Michael Jordan was, he wasn’t an exceptionally good actor (requiring the studio to add comedic actors like Bill Murray and Wayne Knight to help pick up the slack), the plot managed to be both simplistic and contrived at the same time, and most importantly, the notion of Bugs desperately asking Jordan for help was incredibly out of character. Chuck Jones, who despised the film, once stated Bugs not only would have never needed to round up a bunch of other toons AND Michael Jordan to outsmart some aliens, but he also would have taken care of them in seven minutes. Jones, who would know Bugs better than most people in the world, was 100% correct in his assessment.

When Space Jam: A New Legacy was announced, I wish I could say I was cautiously optimistic, but I really just assumed that it would be more of the same. I’m pleased to say that I was wrong, but not that wrong.

In A New Legacy, basketball superstar Lebron James, who is struggling to understand that his son Dom (Cedric Joe) is more into designing video games than perusing basketball, is pitched a production deal by a pair of Warner Bros executives (Steven Yang and Sarah Silverman in rather thankless roles). When LeBron turns them down, the evil algorithm named Al-G Rhythm (get it?) that thought of pitching the idea to LeBron, kidnaps Dom, trapping him and LeBron in a Warner Bros. intellectual property-laden digital world. In order get to get his son back, LeBron must play a game of basketball (surprise!) against AI-G’s Goon Squad. To do so, he must first put together a team.

The plot of Space Jam: A New Legacy manages to pull off the incredible feat of being more convoluted than the first film (and it gets more convoluted as the film progresses), but the personal stakes here are more relatable, so it oddly grounds it in a way the first film didn’t. It also skirts around the issue of Bugs not needing help by having LeBron ask Bugs for help, which already gives it the advantage over the original.

What comes next (and throughout the rest of the film, really) is perhaps the most blatantly unabashed intellectual property self-pleasuring in cinematic history. As Bugs and an animated LeBron are “getting the band back together,” they travel from WB world to WB world looking for the rest of the Looney Tunes gang. The duo visits everything from Harry Potter to Casablanca to The Matrix to the Justice League animated series. As self-serving as these scenes are, they are admittedly pretty fun.

The climatic basketball game, which spans the second and third acts, bashes us over the head with even more Warner Bros. IP, as what appears to be every character that the studio has ever owned ever shows up to watch the showdown. The tidal wave of characters running to the court is overwhelming and requires multiple home viewings and a lot of pausing the catch them all. They also prove to be incredibly distracting during the game. Characters courtside get a lot of screen time, and while they’re just meant to be background characters, you can’t help but watch Danny DeVito’s Batman Returns Penguin next to The Wizard of Oz’s flying monkeys next to Joaquin Phoenix’s Joker next to Will Smith’s Jim West from Wild Wild West next to Burgess Meredith’s 1960s Penguin next to the Joker Goons from Tim Burton’s Batman next to IT’s Pennywise next to Arnold Schwarzenegger’s silk robe wearing Mr. Freeze from Batman and Robin next to the sexually violent gang from A Clockwork Orange (you read that last one correct- and yet they cut Pepe’ LePew from the film for being a bit too aggressive in his pursuits of Penelope Pussycat). These characters wouldn’t be as distracting if they all didn’t just look like run-of-the-mill cosplayers.

The film does a decent enough job of creating some tension in the game, and LeBron is a considerably better actor than Michael Jordan (LeBron already proved his acting skills in Judd Apatow’s’ 2015 comedy Trainwreck), but the ‘dad trying to push his kid into what he wants and not realizing his kid’s real talents’ storyline has been used ad nauseam in various Disney Channel movies and TV shows, so there’s no new territory being explored here. There is also very little actual humor to be had. The original Looney Tunes cartoons were laugh out loud funny, but  the best A New Legacy can offer is amusement with the occasional chuckle (though it still fares better than the original Space Jam in the department). I will admit that the Tunes do translate to 3D CGI pretty nicely (a brief transition that is made inexplicably), but they look much better in their traditional 2D form.

I’ve been pretty vocal about my disdain for animation stunt casting, and by enlarge, Space Jam: A New Legacy avoids that. The voice actors that have primarily voiced the Looney Tunes in recent years, such as Jeff Bergman, Eric Bauza, Bob Bergman and Jim Cummings, voice them here as well. Outside of Rosario Dawson’s brief cameo voicing Wonder Woman, the only real notable actor to lend their voice is Zendaya, who portrays Lola Bunny. Since her introduction in the original Space Jam, Lola has gone on to become a regular member of the Looney Tunes crew, showing up in various Looney Tunes films and television series like Tweety’s High-Flying Adventure, The Looney Tunes Show and Baby Loony Tunes. She has primarily been voiced by Kath Soucie, and the choice to replace her with Zendaya was an odd one, as Lola’s role is not terribly significant in the film. Not enough to warrant a big-name actor, anyway.

The real saving grace for the film is the never disappointing Don Cheadle. The movie doesn’t actually deserve an actor of his caliber, but he manages to convincingly sell the character of Al-G Rhythm quite nicely. I would welcome a sequel just to see him return (though I guess could just watch any other Don Cheadle film instead).

In an interview about the first Space Jam, Chuck Jones said “I can tell you, with the utmost confidence, Porky Pig would never say, ‘I think I wet myself.'” I think I can say with a certain amount of confidence that he wouldn’t rap either. Space Jam: A New Legacy is entertaining enough, but it’s far from a good Looney Tunes film. If you want a good example of how these characters should be treated, watch the Looney Tunes Cartoons shorts on HBO Max. They are as close to the great classic Golden Age Looney Tunes as we’re going to get.

Though it manages to slightly outshine its predecessor, Space Jam: A New Legacy falls flat thanks to its misuse of the Looney Tunes and convoluted and clichéd plot.