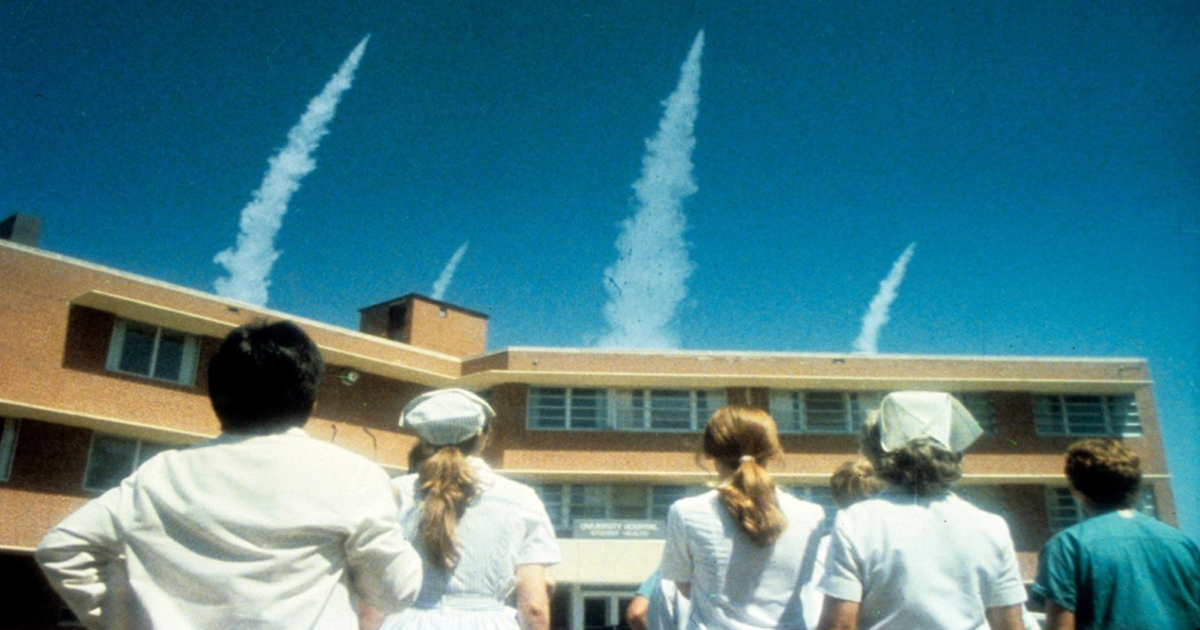 I was apprehensive to watch the documentary Television Event more than any film in recent memory. The reason is simple: there were few events more traumatizing in my life than one that took place in 1983. That may like an over-statement when you take into account the terrible moments marring these past two decades, but I assure you it’s not. To my surprise, I realize the distress I went through was not something I experienced alone. Actually, it was a communal experience I unknowingly shared with about 100 million people who witnessed it at the same time. The event I am referring to was the made for TV movie called The Day After.

This film viciously ripped off the bandaid covering a nation’s fear of nuclear warfare. Unlike many of the most terrifying “entertainment” experiences of the time, you did not have to venture out to a theater to see it. The movie premiered in a place where families would gather, around their living room television sets on the typically family-friendly, ABC. Yes, the same network that brought us beloved shows like The Love Boat, Barney Miller, and Three’s Company also dropped a bomb in our living rooms, a horrifying film about the ravaging effects of a nuclear war on a small town in the midwest.

Quite frankly, the film scared the shit out of me. I was probably too young to watch it. No, let me correct that. I was too young to watch it. That intense human scenes and terrifyingly realistic imagery have been burned into my memory. Little did I know how much this controversial film had made an impact not only in my living room but across the globe. Television Event takes a closer look at the infamous TV movie, from its making to its long term impact on the world. The new documentary, while interesting and insightful, also unearthed some long-buried fears.

That fear came with good reason, the film was contentious even before the film hit airwaves. Footage of ABC’s Peter Jennings and other newscasters of the time “urged children not to watch it alone.” The American Psychiatric Association Dr. Fred Gottlieb warned that the film “penetrates beyond the usual natural defenses of denial. After we lose that, temporarily we are distressed, anxious, and depressed.” Yep. That’s it in a nutshell. This was not a re-airing of Disney classic, it was something much, much bigger.

The film was conceived in the middle of the Reagan Era. The Cold War was in full swing and nuclear arsenals on both sides, the USA and USSR, were expanding at alarming rates. We had enough nuclear weapons to wipe out humanity 54 times over. While the numbers were astronomical and put fear into the public, most could not really imagine the devastation caused by these missiles. That was the case, at least until “The Day After.” The movie mercilessly brought the graphic depictions of the power of these weapons of mass destruction right into America’s living room.

The first half of the doc digs deep into the people behind the making of the film and how it became an unlikely part of The ABC Friday Night Movie slate. Most of this portion of the doc is told through modern-day interviews with the team behind the film. Director Nick Meyer and Stu Samuels (VP of ABC Motion Picture) had two competing visions of what the film needed to accomplish both artistically and commercially. They tell tales of how they butt heads throughout pre-production, production, and post. Based on the snide remarks and some well placed passive aggression, it seems like decades later that their hard feelings have not simmered down.

The documentary combines an oral history with archival footage that transports us back to the film’s production, providing a thorough insight into the thought and care placed in crafting the film. Nothing was done haphazardly, which can make some of its intentions more problematic. Was the goal to educate, scare the world straight, or just to simply terrify the audience? No matter what the intentions, its effects ran deep. Director Jeff Daniels, explores these effects closer during the doc’s second half, diving into the personal and the political implications of the film.

While the Day After’s producers did include numerous Kansas locals as extras and even as the stars of the film, this was anything but a low-end production. The cast also included some of the biggest actors at the time, including Jason Robards, JoBeth Williams, John Lithgow, and Steven Guttenberg. Local or Hollywood actor, none left the filming unaffected by its intensity. Some reported PTSD and others had nuclear nightmares (which they called “nukemares”). Decades later watching the scene where the bomb goes off in their small midwest town was enough to bring some actors to tears. Footage also is used to show the reactions of the actual public shortly after it first aired. As expected, many were traumatized and with good reason. It made me curious how modern, unsuspecting audiences would respond.

The Day After pulls no punches, it is destruction on a personal, human level; characters they spent getting to know during the film’s first half suddenly vaporized, burned alive, or left in a radioactive wasteland where their skin was falling off the bones. Those who survived may have had it worse- living in a hopeless world with families huddled in their basement to avoid the radiation, sharing canned foods, while their neighbors and pets were dying outside. Some scenes showing the supermarkets being raided for food and batteries echo the recent events of the pandemic multiplied tenfold. The scenes hit too close to home. Even decades later it is quite impactful.

As mentioned, the impact was not limited to the public. The film paints a vivid picture of this different time where people had 3 networks of broadcasting to choose from, not the millions of options we have now. So when this film detonated people had to take notice. This is no better displayed than with the clips of Ted Koppell‘s broadcast news special airing directly following the movie. It included some of the top people in the world, Secretary of State David Schultz, William F. Buckley Jr, Henry Kissinger, Carl Sagan, Robert McNamara, and more. Watching it back now, it is simply fascinating.

These iconic people partook in heated discussions about the film’s political motives, frightening scientific breakdowns, or terms like nuclear winter – the months at subzero temps that could follow a nuke strike that would wipe out crops, species, and maybe humanity). All this over a TV movie! We also learn that the film’s reach extended even further – all the way to the White House and beyond. The results that unfold would seem almost unbelievable if they did not really happen.

Television Event is engrossing and profound. It is a snapshot of a different era, a time when people would unite for communal experiences that all but felt extinct today until the pandemic. The film’s scope is ambitious, extending well beyond the expected topics to provide a detailed look at the process and business of filmmaking, how the film penetrated world politics, its effect on a public who was desperately looking for a change, and more. Eileen Meyer and Aaron Wickenden‘s editing efficiently swings back and forth from the 80s to the present day while keeping us fully immersed in the aura of this phenomenon. The film not only revisits the past it pensively reflects on it through today’s lens, asking questions that will certainly resonate with those who lived through it while capturing the attention of the younger audience.

The documentary ends with the closing shot of The Day After. It is an image that still haunts me today and one which I may never shake. When it comes to the threat of nuclear war are we better off today or just more distracted? After the year that 2020 has turned out to be, I may hold off pondering that. Something tells me I am not sure I will like the answer. If there is one positive take away from Television Event it is that the power of art is real. Don’t underestimate it.

Television Event is currently screening as part of DOC NYC. 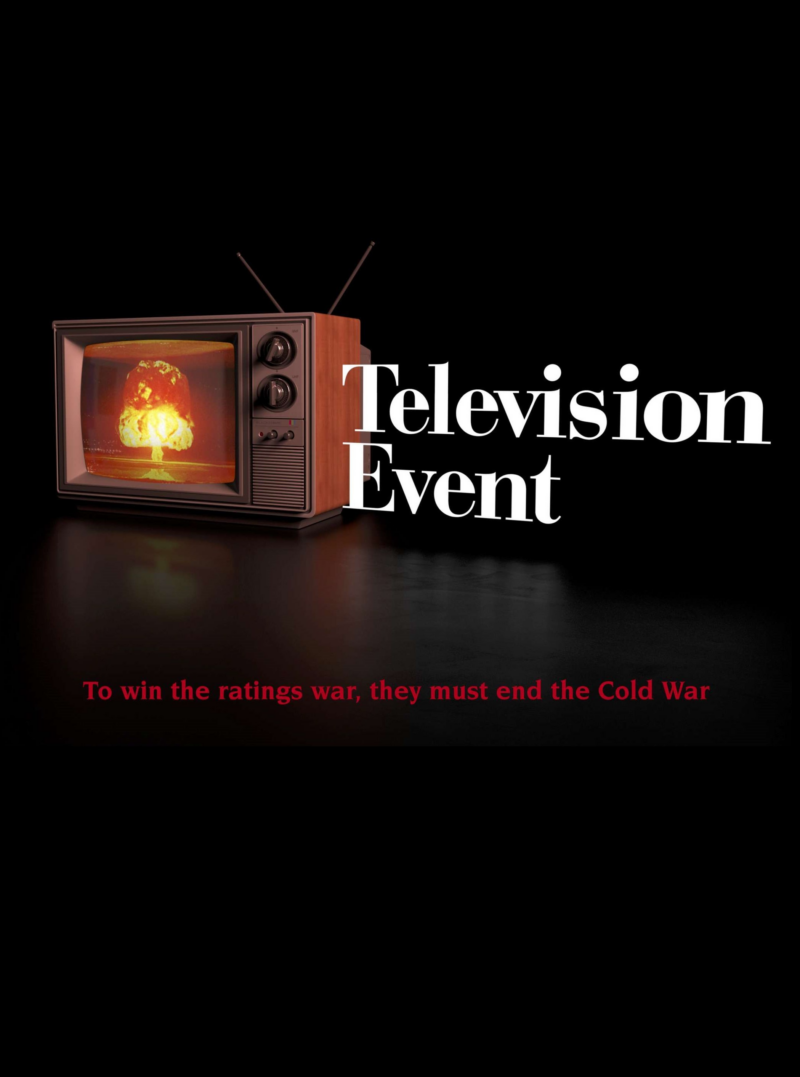 The documentary is a time capsule of a different era, both informative and downright scary.