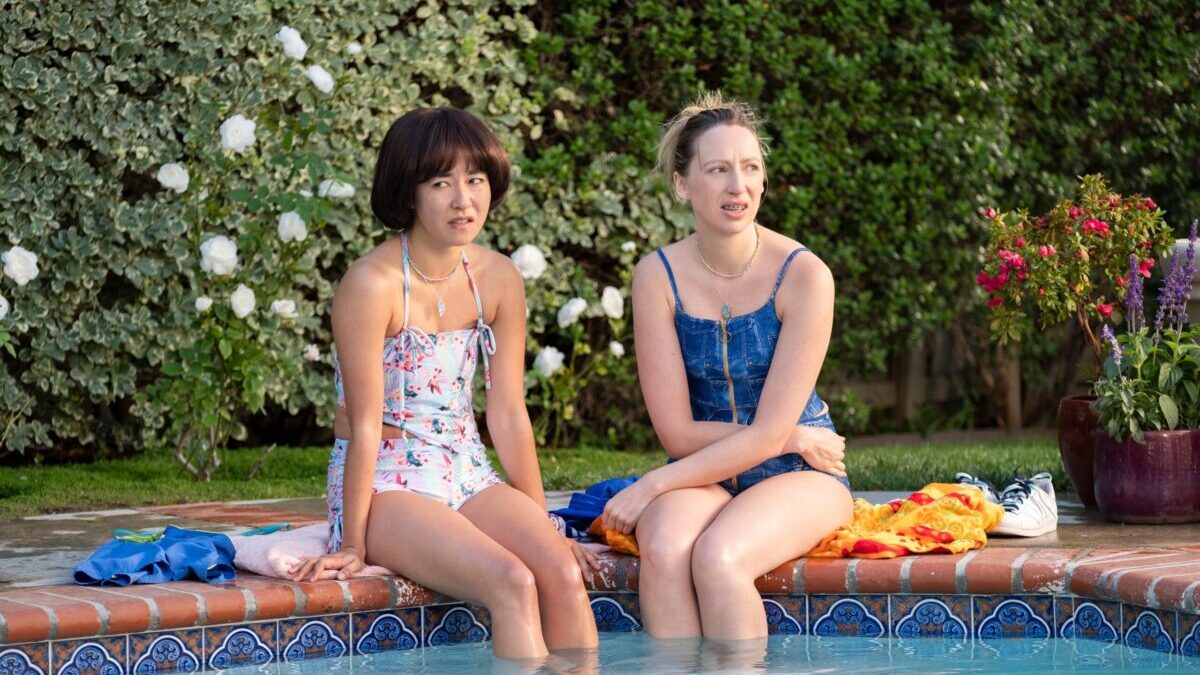 My recollections of seventh grade are foggy and buried in the back of my mind with the other mildly traumatic memories. But the feelings of seventh grade left behind remain, frustratingly, in bits and pieces. Pen15 captures this feeling perfectly, starring show creators Maya Erskine and Anna Konkle as 13-year old versions of themselves alongside a cast of middle-school-aged actors. The show, uncannily true to life in spite of (or because of) the age difference between our protagonists and the rest of the cast, captures a painfully honest and funny truth. As Erskine notes in an interview on Conan, “You never really leave 13.”

Pen15’s best trait is its commitment to authenticity. According to its creators, the show stems partly from a lack of true-to-life portrayals of middle school. It’s even described as “middle school as it really happened.” Every detail, from the writing to the acting, particularly Erskine’s and Konkle’s self-conscious 13-year old body language, to the 2000s era props, is in service of authenticity. And when that’s your driving force, you get to bypass a lot of tired TV tropes.

There are no empty happy endings, and no justice served as characters Maya and Anna navigate their lives as awkward outcasts. We can instead focus on what was real at that age, and remember some of the feelings we forgot as we aged—the absolute fury for our parents when they risked shattering our fragile social lives just to say hi, the way we’d throw our friends to the wolves for a chance to climb the middle school hierarchy, the gaping blind spots we had for crushes.

Season two delves deeper, visiting heavier themes involving divorce and social exclusion. You’ll still laugh, but you might also cry a little remembering how amidst all the literal growing pains of those pubescent years, you were still forced to do a lot of growing up.

The girls’ relationships with their mothers are at the heart of this season. As Anna deals with the emotional fallout of her parents’ divorce, she lashes out at her mother (Kathy Kone played by the captivating Melora Walters). It’s hard to watch but rings true to life. Rather than leaving this angst to simmer in perpetuity, Pen15 goes a step further towards the end of the season when Anna sits down with her mom and apologizes. It’s a touching moment, flipping the all-too-common script of mom as instigator, and dad as perpetual good guy forced to sleep on the couch. Moments like these reveal the level of introspection that went into the show.

Similarly, Maya’s relationship with her mother Yuki, (portrayed by Maya’s actual mother Mutsuko Erskine), is refreshingly lifelike. It’s a welcome reprieve from stereotypical and sometimes traumatic portrayals of a tiger mom upbringing. The two fight, often loudly, but they also take baths together and talk about life. Yuki is strict, but a tender, grounding force in her daughter’s life. She knows when it’s time to soften up and reassure Maya that she’ll always be her little girl.

Pen15 also circumvents stereotypes around Asian characters in general with Maya, whose Asianness pervades her life, but never defines it. The show recreates the middle school experience of real-life Maya Erskine, who was not a well-behaved, quiet A+ student like so many on-screen Asian characters. She’s allowed to be loud, misbehaved, horny, or even kind of weird. She has to put up with the racist bullshit of her classmates from time to time, but Pen15 never forces her to bear the responsibility of shutting them down. Instead, it reminds us that on-screen Maya is a kid, not a vehicle for virtue-signaling. When it comes to representation on-screen, we don’t often get to see people of color treated as just…people.

It sounds simple, but these nuanced representations—a loving Asian parent, a boisterous Asian student, are cathartic to watch.

Pen15 took me by surprise at times (now that I’ve typed that out, it looks really wrong but we’ll just move on). Where I expected to see a tiger mom, I got Yuki’s tenderness. Where I expected a nasty suburban divorcee, I got a window into Kathy’s vulnerability. The same distortion happens when we look back at our own lives. As adults, we might think we’ve learned to see our parents, friends, or crushes as human beings, flawed and wonderful in their own ways. But often, we remember the caricature instead. This show brings us back to that age and reminds us, we never really left it.

The first half of Pen15 season two is streaming exclusively on Hulu. Part two is expected in 2021.

Pen15 brings us back to seventh grade and reminds us, we never really left it.