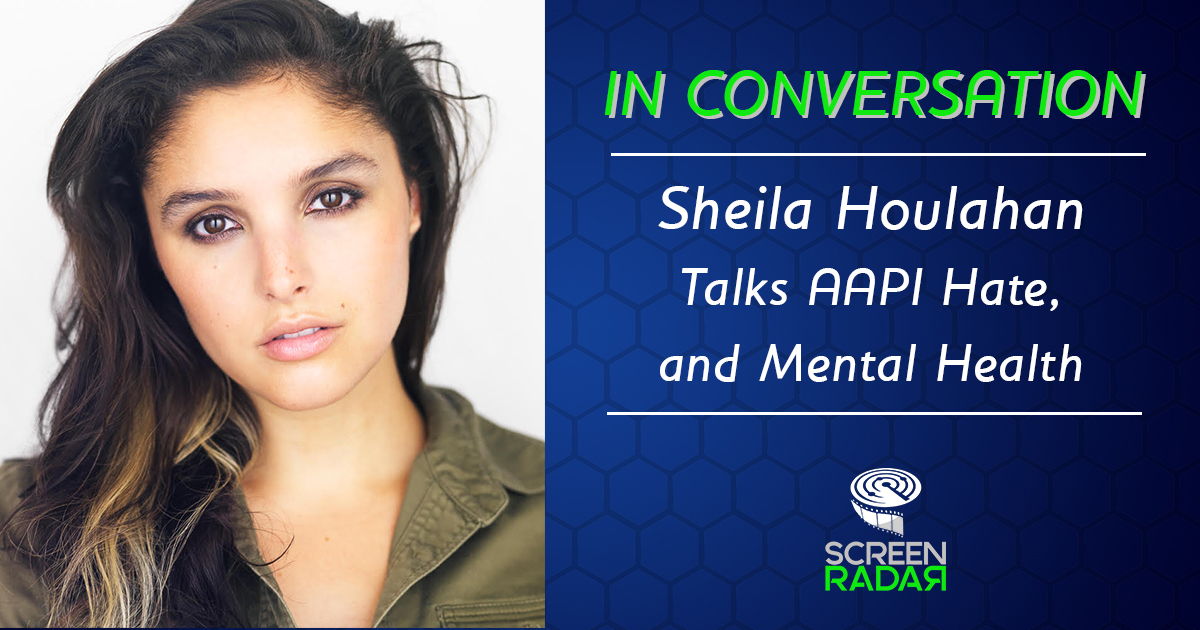 After over a year of enduring the COVID-19 pandemic in the United States, it’s easy to feel completely worn out by anything online, especially social media. I know I learned what it meant to truly doomscroll on Twitter this past year, at first about the spread of the deadly coronavirus. Shortly after came the stories of violent hatred against Asian Americans as they were blamed for spreading the virus. Don’t even talk to me about mental health or that garbage fire we call politics.

It’s easy to forget social media can also be a constructive platform, a place to advocate for overlooked issues, and elevate the voices of marginalized groups. This is how Sheila Houlahan, an up-and-coming Indian-American actor (The Little Things, Beloved Beast, Wallflower), sees it. We sat down together (virtually) to discuss AAPI hate, media representation, and mental health.

“This is all coming hot off the heels of a year of intense resurgence with BLM and I was really surprised to see the vast silence about the attacks against AAPI elders. It shocked me, and when I started posting things about it…I remember there were some white folks who commented and were like ‘Um, I’m not really seeing a lot of media outlets pick this up. I don’t think it’s that important,’” she recalls. “The lack of representation of our people in media, whether it be entertainment, you know film, TV, or whether it be in the news, I think has really contributed to the silence surrounding this.”

For a long time, precious few outlets and public figures were vocal about this ongoing crisis. As news coverage finally picked up this year, friends posed the question to me. What do I do? How can I help? What do I say? Sheila experienced the same thing.

“My answer to those people would be like…ask and listen?” She chuckles. “Start by having the conversation and asking what people need right now and then let them dictate it…I think it’s interesting that folks are leading with that fear because it signals to me this need to control the narrative.” She offers advice for allies: “Know your own boundaries of what you’re comfortable with and have that tucked away in the back of your mind, but then ask and see if you can show up. And if you can’t personally, then help connect that person with people who can.”

The advice may sound vague, but the hard truth is that there is no concrete list of behaviors to check off to be a good ally. Often, the best we can do is lead with intention and humility as Sheila suggests, which forces us to recognize that everyone requires different support, and that the issues AAPI face can be wildly disparate. As a mixed race Indian-American actor, Sheila is all too familiar with having her story flattened.

“I’m half Indian and half-white, and growing up like that I never really felt like I fit into either community,” she reflects. “I wasn’t really considered white, but I passed as white, so I was just kind of awkwardly raised as white.” She laughs. “This isn’t my full identity and I’m silencing myself, especially with the model minority myth and how AAPI are already erased as being people of color. It was sort of like an amplified version of that.”

Sheila uses this experience to refocus the lens for the current moment.

“Speaking to the other side of that, for the folks who are being targeted. I think our efforts really need to be focused on protecting elders, protecting undocumented folks, protecting folks with financial insecurity and instability, and also differently abled folks within our community…I think it’s my job as somebody with a lot of privilege, but who still identifies as AAPI to be doing the labor like talking about it, trying to center these conversations, trying to amplify voices who are under amplified so that people can hear their stories, donating my time and money to be able to help champion these causes. I think it’s important for me not to take up those resources or center myself in those conversations.”

Sheila brings this empathy and insight to her work as an artist as well, reflecting on how representation in media is often tied to real-world ignorance.

“So much media that’s centered around AAPI, if it’s American made, it’s almost always a comedy, so we’re always like the brunt of jokes. I’m thinking about my own people in Bollywood films, that’s the only time you’re really going to see a drama. But then it’s labeled as a foreign film, you know?” Sheila continues. “I think we need to decolonize the notion that AAPI are just a joke and maybe challenge how we approach comedy in the industry…If your comedy is surrounded around upholding stereotypes and two-dimensional versions of people, is that really the media we need right now?”

Maintaining one’s authenticity in an industry that often profits off stereotypes can be an intractable challenge for anyone who doesn’t fit a certain mold, but Sheila brings an honest sense of self to everything she does and can’t imagine it any other way.

“I think back to how I was before I had a solid sense of how I identify and who I really am at my core. I think of how I behaved in the world, and so much of the art that I made was really fear-based…The way I approach my work, and the way I enter rooms, and the way I meet with folks now is inherently laced with my own identity and who I am. And a part of who I am is giving people the space to be who they are as well. I don’t know that I would want to participate in spaces that don’t welcome that.” She notes, contemplatively, “I think that eventually something in you shatters if you don’t walk around as you are, and show up as yourself.”

As we approach the frightening, exciting, overwhelming possibility of returning to “normal” life by July 4th in the US, it’s hard to imagine what normal was, and what it will be.

“I think we have to question what about the old normal is actually worth keeping.” Ever thoughtful of the bigger picture, Sheila questions: “I think we really need to ask, especially in our industry, are there things that could stay virtual and mean that more folks get access that they didn’t have before?” She continues. “Should we always have ways to include all members of our community and not assume that everybody can just hop in the car and drive to an audition or drive to the meeting? And my answer is a resounding ‘Yes. We have the technology. We’ve had to use it. Let’s keep using it.’”

She zooms out again to highlight the “second pandemic on the horizon” of mental health.

“There is an unprecedented level of PTSD and unprocessed trauma in our world, not just our country, but our planet,” she says. “When everybody on the planet goes through the same trauma…we don’t have resources to help people, because we all need help. We all need to be really delicate and ginger with ourselves and hold space for ourselves and recognize that there’s a lot of processing that’s going to have to go into this. My hope is that the rise in what’s happening to folks in terms of their mental health is going to promote that we need better care, that we need better care systems, more affordable care systems, more accessible care systems at all different tiers because this isn’t just going to go away on its own.”

People often avoid talking about tough topics like mental health or racism, fearful of reproach or embarrassment, but Sheila demonstrates that such conversations can be balanced with humor and humanity.

“I wish I could be a fly on the wall in the future for those times we get together and the social awkwardness is like at an all-time high. And everyone is in their PJs and everyone is being weird and there’s lots of uncomfortable silence.” She laughs, “There are some folks who are like, ‘It’s like riding a bike, it’s gonna be so normal,’ and I’m like, that sounds great for you. I’m going to be really weird at first.”

While we wait for the “new normal” to arrive, Sheila is currently producing a film she will also act in based on Marsha Norman’s play ‘night Mother, adapted to be relevant to the pandemic. Yes, Zoom will play a large role.

“God, there’s already so much media out there that’s like, it’s a Zoom play! But this is one where we’re actually trying to use the format and have it almost be another character.”

The play will reportedly not shy away from depicting the honest consequences of isolation, so we can expect it to be heavy. It’s also an opportunity to raise awareness about topics we need to talk about, but don’t always know how to. That’s kinda Sheila’s MO, and she has the informed perspective and charisma to make such conversations both accessible and impactful. I’m looking forward to it.

If you’re still skeptical about social media’s capacity to improve, rather than detract from your mental health, I recommend following Sheila’s artistry and advocacy on Instagram.

If you’re inspired to be a better ally, consider taking a free bystander intervention training, or donating your time or money to a nonprofit organization that provides support for marginalized groups. Here are a few we thought were cool, but we encourage you to find a local chapter in your own town or city, as they often get much less funding than national efforts.