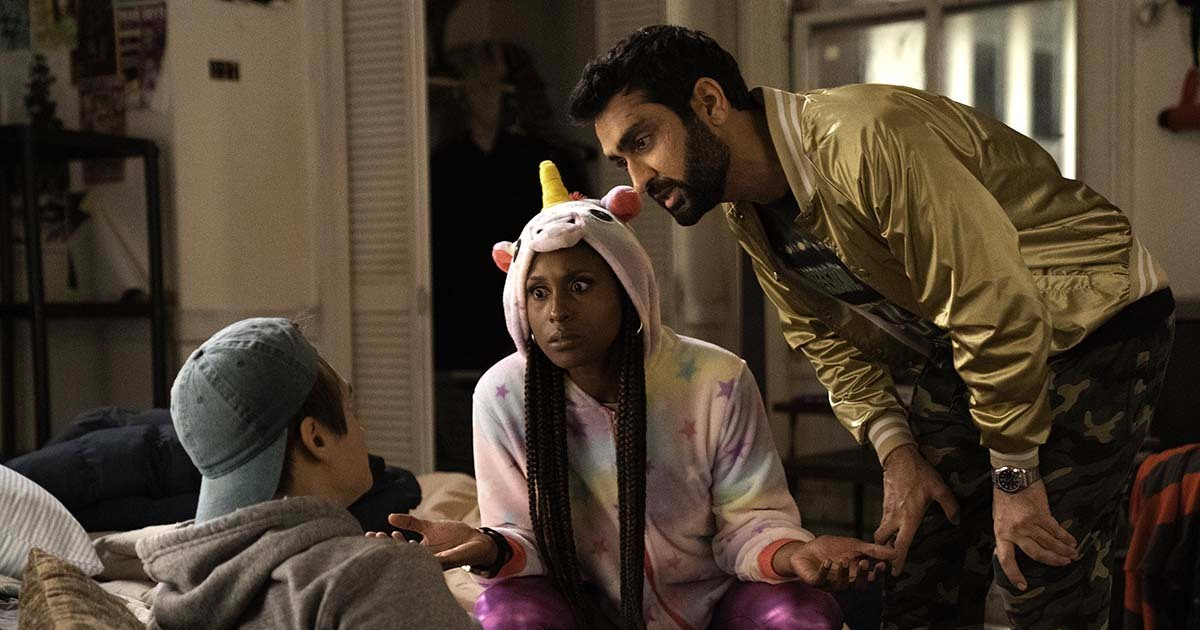 Chemistry is everything. Bad chemistry can destroy a potentially good film. Good chemistry can accomplish the opposite, elevating a lesser film to new heights. For director’s Michael Showalter’s film, “The Lovebirds” luckily this is a case of the latter. This isn’t to say “The Lovebirds” was a bad film to begin per se, a better way to describe it would be familiar.

The film opens with a sweet, romantic sequence showing Jibran (Kumail Nanjiani) and Leilani (Issa Rae), a young couple who after a first date fall head over heels for each other – so much so that they cannot take it upon themselves to end the date. Like many relationships in the early days, it starts with plenty of flirtatious gazes, laughs, and uncontrollable smiles. As we all know, that rarely lasts. Flash forward four years and the pair are hitting some serious relationship struggles. Moments of bliss have been replaced with measureless bickering. The quarrels range from the personal to the inane, such as their disagreement about how well the couple would perform as a team on the reality show “The Amazing Race.” The relationship is definitely has lost its spark. Well, they find one when they are thrown into the mix of a police pursuit that ends with murder. Suddenly, they are running their lives from the killer (Paul Sparks – earlier pun was probably intended) while trying to clear their name from the crime.

The real draw is Rae and Nanjiani. For those not familiar, Nanjiani, who first took the leap from supporting actor to lead in his semi-biographical, Oscar-nominated film “The Big Sick” (which was also directed by Showalter) is probably best known for his work on HBO’s “Silicone Valley.” For Isa Rae, who has been killing as the creator and star of HBO’s “Insecure” for the last 4 seasons, this is her first “big-screen” leading role.

In “The Lovbirds” they pair up to deliver a believable and very likable feuding couple. Jibran has a relatable awkwardness with a dry witty delivery and Leilani brings a take-no-shit attitude delivered with a charismatic smile. This all disappears as they slip into a wild-eyed panic during some of the crazier events of the night. The pair have a natural oil and water vibe, riffing off each other in a way that seems almost effortless. Individually they are wonderful. Together they are something special. Their chemistry from minute one would make you assume they had worked together many times before. Every wild situation they encounter, no matter how familiar or over-the-top, their raw comedic abilities will keep you locked-in.

The laughs are plentiful. Both Rae and Nanjiani have superb comic timing and a knack for physical humor. I won’t ruin any of the jokes here, but their less than skillful fight scenes are some of the funniest in recent memory. I was laughing out loud as they fought back attackers with the same uptightness you find when a skittish person tries to kill a large spider. In addition, the quieter scenes that revolve around their broken relationship are unexpectedly effective helping to elevate the pair well beyond joke delivers, but rather into characters we actually care about.

“The Lovebirds” was intended to have been widely released in theaters, but went straight to Netflix because of the coronavirus. Overall, the crime aspect is barely coherent enough to hold your interest but I doubt that it will matter for most viewers. There is enough entertainment value in the relationship and comedic antics. While this is not a perfect film in any way, it surely is an enjoyable ride. Who knows though, it may be looked back upon as the film that served as the starting point for the great comedic duo of Rae and Nanjiani. At least one could hope.

A potentially forgettable comedy is elevated by the wonderful on-screen chemistry of Rae and Nanjiani.