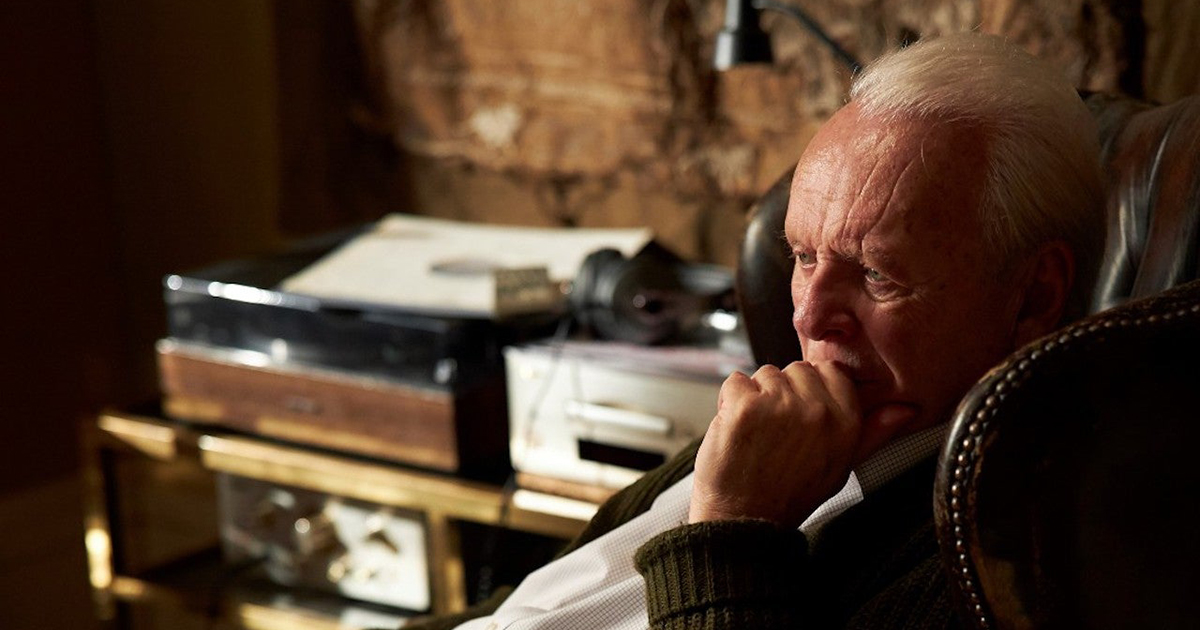 Some films place you into the shoes of its subject, other films transform you into world’s that you did not even know existed. This year, we have been blessed with some films that have done this quite effectively. Nomadland showed us the relatively unknown way of life of American’s nomads, people who were often left behind by a world that did not value them. Darius Marder‘s Sound of Metal took us into the head of Ruben Stone (played the incredible Riz Ahmed) to experience the loss of hearing in a way never accomplished before on film (check out my review). In that vein is Florian Zeller‘s The Father an often trippy journey into the head of a man who is suffering from on set dementia.

Dementia is something we hear about but never has it been explained like this before. Zeller does not only tells us about dementia he holds us captive by the brain disorder by making us feel its effects. The film stars Anthony Hopkins as Anthony an older gentleman who is in the grips of the disease and, like many, does not know it. While his daughter Anne (Olivia Colman) tries to provide him with the assistance he needs, Anthony and the viewer become increasingly lost in the labyrinth his mind has become.

He becomes suspicious of his daughter, he has moments of lost temper, forgets who he is talking to or what they said making is just as disorienting for us as we try to piece together the puzzle pieces that may never fit together. It is simply frustrating as we try to gain our bearings and every time you think you have them, everything shifts. The editing work of Yorgos Lamprinos is amazingly faceted, seamlessly splicing together alternate versions of Anthony’s realities in an almost maddening fashion. It keeps the viewer on their toes and head scratching throughout.

Zeller’s work here is quite impressive. A first time filmmaker he entwines us in this character’s existence leaving us powerless and eventually more empathetic of a situation that can try the patience of even the kindest soul. As someone who has witnessed a love one slowly disappear into dementia, I wish I had access to this film years ago. It may not make it any easier to handle, but it provides the insight needed to possibly find that ounce of patience needed when a hug would serve better than a harsh word.

Hopkins has never been better. This is a career performance, which is incredibly high praise for the guy who played Hannibal  Lector, one of the most iconic characters and respected performances ever put on film. You do not watch this without forgetting he is even acting. Colman is again wonderful, making her work look effortless as the daughter taking most the shrapnel from her father’s mental demise. The feeling of helplessness, confusion and frustration is captured perfectly in Zeller and Christoher Hampton’s screenplay.

The production design here is impeccable and is used to reveal the affects of dementia in a way that is quite innovative. Watch it once then watch it again for the nuances that you probably missed the first time. For a film that originated on stage, I never once had that in my mind, but after learning of its origins, it makes sense and make me wish I could see it in both mediums.

The Father is absolutely heartbreaking, mainly because this affliction is something that is affecting just about everyone’s lives in some form. And, suddenly, thanks to film, it suddenly makes more sense. This is a film that should be seen by anyone dealing with dementia in their family. Empathy is a powerful trait and film is one of the best mediums to share it.

The Father is absolutely heartbreaking. Hopkins delivers a career performance in a relentless film about a topic that touches many of us.