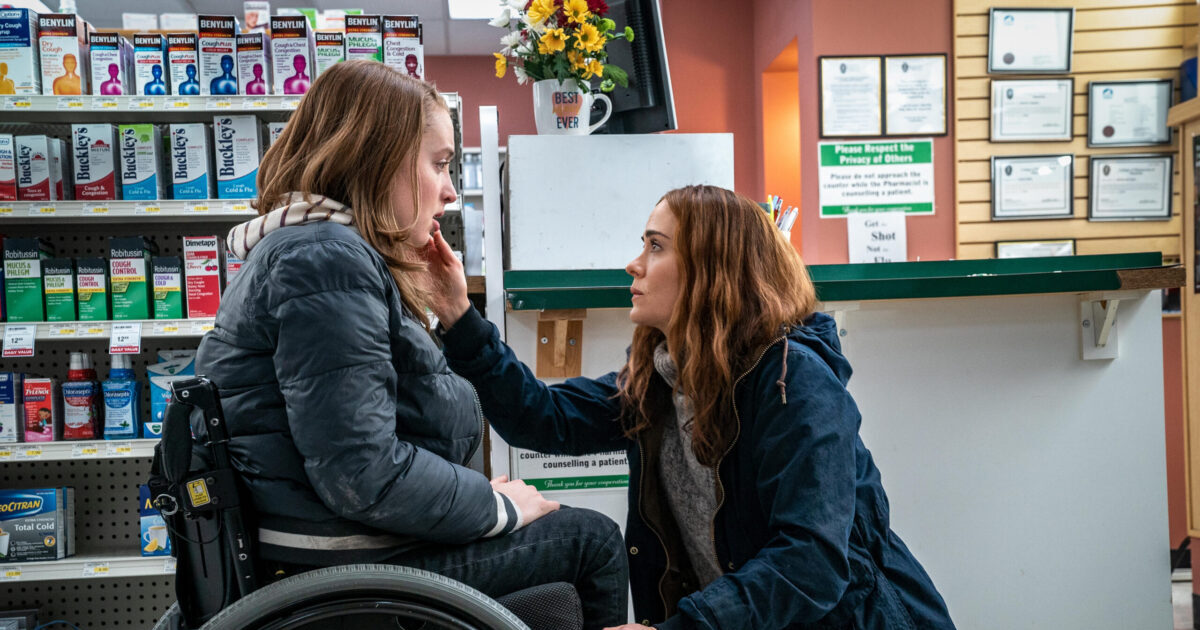 Aneesh Chaganty’s Run, his sophomore feature film after 2018’s Searching, was originally scheduled to premiere in theaters on Mother’s Day weekend. It would have been great ironic timing for a psychological thriller about the malicious relationship between a seemingly devoted mother, Diane (Sarah Paulson), and her wheelchair-bound daughter Chloe (Kiera Allen). But pushing the release date to just before Thanksgiving still offers some decent irony. And, after watching, you might be newly thankful that it’s harder to get out and see family this year.

Run starts by following Chloe’s daily routine, meticulously managed by her mother. She slowly realizes through a series of clues that Diane may not be her selfless caretaker, but her cruel captor instead. The film follows a fairly typical thriller structure and plays on the established horror theme of dysfunctional motherhood. According to an article on The Artifice,

“The mother figure in maternal horror films defies the expectations around her role – she is either unable to protect the child’s safety or on the verge of destroying what she has brought to life. She switches from a life-giving to a death-giving entity….”

This is why films like Psycho, Hereditary, The Babadook, and many other flicks about scary moms are so disturbing. The safety of the home, and the figure society most closely associates with home, the mother, are distorted into a threat. It’s an effective theme, but also one that reflects and sometimes propagates the idea that motherhood is part and parcel to femininity, that not being a mother is deviant, and that being a bad mother is even worse.

While Run depends on these themes, it does not rehash them. Instead, it delivers a well-executed thriller about the nature of trauma and abuse.

Unlike many horror films, Run does not rely on scenes of shocking violence or gore to scare us. The movie builds tension by letting us discover just how trapped Chloe is alongside her, effectively placing the audience in her shoes. Chloe’s motivations and personality as a 17-year-old are also very relatable as she longs for an independent life outside of her mother’s house.

Even when there are moments of violence, they’re tame in terms of visceral disgust. The horror arises from Diane’s disturbed psyche, and from the altered reality she’s constructed around Chloe. Some have criticized Run for Chloe’s unrealistic trust in her mother, but I would characterize their relationship as a valid portrayal of the effects of potent emotional manipulation. We may find it strange that Chloe doesn’t realize her situation earlier, but we can’t forget that she’s a teenager who has spent her whole life living under the thumb of her mother.

The film also lets Chloe, the victimized daughter, drive much of the plot. The events are not set in motion by Diane’s abuse, or by her corruption of her daughter as in many other maternal horror flicks. Instead, they are propelled by Chloe’s creeping discovery of her mother’s secrets, and her subsequent efforts to escape.

It’s worth noting that while Chloe’s health conditions play a significant role in her captivity under Diane, they never define her character. Chloe’s foundational traits are creativity and resourcefulness, and her ability to think strategically rivals Diane’s. The research around disability that went into the script, and the decision to cast an actor who uses a wheelchair as Chloe prevents the film from repeating the “Disabled Means Helpless” trope.

Diane’s character engenders some sympathy as well. Her actions, though unforgivable, stem from a single-minded devotion to motherhood and an avoidance of her past traumas. She, too, is a victim in her own story.

Even so, the film sometimes suffers from a lack of character development. It’s not always clear, particularly at the start, how Chloe feels about her regimented life with mom. Her shift from content to suspicious upon discovering a piece of her mother’s deception feels just a tad too sudden. Did she ever feel trapped in the past? Or, was Chloe firmly under Diane’s control, blissfully ignorant about her predicament? Unfortunately, the depth of Diane’s emotional manipulation and the nuance of this mother-daughter relationship is not fully fleshed out.

Despite this shortcoming, the film remains excellent, horrifying, and fresh. Paulson thrives as Diane, whose warm maternal veneer just barely hides a terrifying psyche. Opposite her, Allen debuts what promises to be a remarkable career with her impressive, and physically-taxing performance.

PS: If you’re truly hungry for more character development, I highly recommend watching the deleted scenes included in the Extras section on Hulu.

RUN is streaming exclusively on Hulu.

The perfect way to make you even more uncomfortable around your family this holiday season.