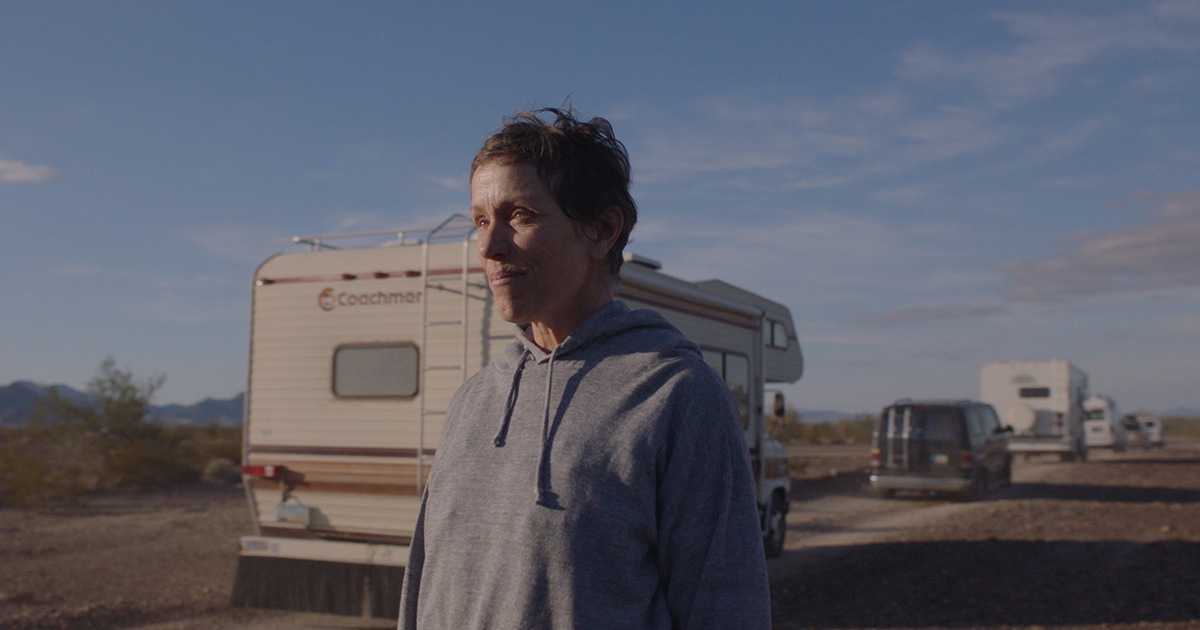 There is a word I lean on often (probably too often) over these last few years. The word is ‘broken.’ In this often troubling world, it suddenly seems fitting at an ever-increasing rate. During Nomadland, the word ‘broken’ feels properly applicable in numerous ways; a broken country, broken economic system, broken people, and the broken ‘American Dream,’ to name a few. Chloé Zhao’s film, which she directed, edited, and adapted from Jessica Bruder‘s non-fiction book of the same name, explores these broken pieces and much more.

It paints a textured portrait of America that captures the people, places, and dreams left behind as the system churns onward. Nomadland meanders in the best of ways, never hitting any big splashy moments. It instead, moves at its own pace to set in place the smallest of strokes which, when combined, deliver a richly detailed and layered canvas of earthy human tones. Like Zhao’s incredibly moving The Rider, its impact creeps up on you.

Set during the Great Recession the film follows the life of Fern (Frances McDormand) a resident of Empire, Nevada. The once relatively vivacious town is at the point of collapse after the closing of its gypsum plant. The jobs, most of its residents, opportunities, and even the zip code have left with it. Fern’s simple but pleasant life is turned upside down. Her husband has passed away and without any meaningful employment options, she loses their home, forcing her to live in her van. Besides the content of that van, most of what defined her is gone. She becomes a modern-day nomad. Her existence consists of traveling the country looking for work, drifting from one thankless temp job to the next in order to get by.

Although the lack of job opportunities is limited and the climate is not ideal for life in a van, Fern is unwilling to move on from Empire. Doing so, in her mind, would erase the very existence of her husband. Even as others offer her a roof over her head, she cannot bring herself to accept it, proudly explaining, “I’m not homeless, I’m just houseless.” Fern’s self-induced isolation seems to be part of her healing process, or at the least, a defense mechanism. This loneliness can be found in the framing of just about every shot composed by cinematographer Joshua James Richards. The visual storytelling of Nomadland is subtle yet powerful.

Fern is introduced to a desert boot camp for beginner nomads run by Bob Wells, a Santa Claus-looking man who exudes warmth. He sees the “Titanic is sinking and economic times are changing. And so my goal is to get the lifeboats out and get as many people into the lifeboats as I can.” After some resistance, Fern agrees to join the rendezvous where she learns tips for living the nomadic life, from fixing flats to how to avoid being caught illegally sleeping in your van. Most importantly she (and the audience) meet the people who live this existence… and it is an eye-opener.

It is here when fiction and reality become blurred. The people we meet are fictionalized versions of themselves: Bob, Linda May, and Swanky are just a few of the real people whose stories we learn. Although everyone’s story is different – many revolve around essentially becoming castaways – the world has used them until they are no longer needed and has essentially forgotten them. Bob compares them to workhorses who have worked themselves to death and now are being put out to pasture. It is a sad but accurate analogy for this broken country.

It is easy to forget the challenges others face, especially in this politically divided country. When we see a map these days we often see red states and blue states, forgetting (or worse, not even realizing) the people that live there. This country is vast and it is full of people, people with their own stories. Many have been lost in the shuffle and forever live on the margins. These are not the showy folks, with no wealth or glamour to be found.

They are the real people, and as you meet them, you realize how unfair the world can be. Most search for the American Dream, but for one reason or another – be it medical bills, job loss, a death in the family, or just a run of bad luckz, – the ‘Dream’ has been canceled. They make their existence in much simpler ways. Quite frankly it is endearing. The lifestyle would almost make you jealous if we were not so seduced by consumerism, technology, and capitalism.

We hear their deeply personal stories, sit with them around the campfire, live with them and laugh with them in an almost voyeuristic way. Fern’s story takes a back seat as we meet our fellow humans. It is both enlightening and also sad at the same time. Zhao paints an intimate portrait, keeping the camera tight to better examine the real faces of America: wrinkles, folds, and creases line them – trophies of the harshness of life. The close-ups feel like a confessional at times as the American sins are being told in hopes of absolution.

Again, there are no bold swings here. The energy comes from life’s minutia. If you have a heart and care about your fellow man, not only their net worth or what value they bring to you, you will get caught up in their stories. It is a slice of the world that is frequently lost. While seldom told, they deserve to be heard and are quite stirring. They too are people who matter.

The performances as a whole are so natural that you will want to applaud them, as you wonder if these people are acting at all. Their perspective on life is refreshing. Swankie, especially, will affect many hearts. She vows to make memories instead of letting life fade away. Her journey in this film is as heartbreaking and inspiring as they come. The residents of this film carry wisdom that you cannot find in books; it comes from living. That is what the film most delicately captures: life. A hope that rises above the underlying sorrow. It is in the face and voice of Swankie, as well as Linda May’s, Bob’s, Fern’s, and others.

As Fern, McDormand’s work is nothing less than spectacular, delivering a nuanced, and largely internalized, character study.  Empty and directionless, like a human tumbleweed she blows across the desert, in and out of the lives of others. While she often forces a smile on her face, there is always a lingering depression behind her eyes. A woman struggling with her own self-worth, her own existence. It is hard to describe but must be even tougher to pull off as an actress. The only other familiar face belongs to David Strathairn playing a kindhearted man attracted to Fern. His tender performance offers her much of what is missing from a conventional lifestyle – a softer side to the harsh life.

The film is gloriously shot by Richards. As mentioned, his intimate textured close-ups let us almost feel the characters. The film is also packed with sweeping landscapes that feel like a photo gallery exhibit capturing Americana come to life. Vast and vacant. Richards often frames a solitary person among the enormous surrounds to capture Fern’s loneliness and isolation without any dialogue.

At the same time, the film captures the beauty of the American landscape: stunning vistas painted in an array of nature’s colors: mountains, deserts, fields, and even highways. While much of the film is shot in the warmth of the magic hour it retains a natural feel. It is never stagey. Actually, many of the shots are backlit. This flattens the subjects against their backdrop while retaining a feel of cinéma vérité. The minimalist use of Ludovico Einaudi‘s score comprised of piano and strings occasionally accompanies the visuals, unobtrusive, as the viewer takes it all in.

A mix of long takes combines with rhythmic flipbook-style editing to provide an array of glimpses of the boundless environment. The cuts also create a symphony of natural sound: winds across the prairie, the roar factory noise, cars moving across the highways, and silence. The soundtrack of American life. It almost romanticizes in its simplicity.

With Nomadland, Zhao completes another portion of the canvas which began with The Rider.  The films feel like they exist a short drive down the road from each other. She uses a contrasting mix of beauty and tragedy to tell the stories of the forgotten. The themes are numerous and worthy of exploration beyond the film’s running time. While some viewers will only see the sadness, others will find a celebration of hope. Nomadland is a reflective and poignant look at what is broken in this world and how the human spirit finds a way to gather the pieces.

Nomadland will be in theaters and streaming on Hulu starting February 19th.

Nomadland is a reflective and poignant look at what is broken in this world and how the human spirit finds a way to gather the pieces.