An average night in Romania turned to tragedy during a heavy metal concert in a Bucharest nightclub called Collectiv.  The band’s pyrotechnics unknowingly set fire to the ceiling, quickly transforming the club into a raging inferno that killed 27 instantly and injured another 180. That is just the beginning of the story. Alexander Nanau’s documentary Collective (Romania’s Oscar submission to the 2020 Best International Feature) goes beyond the events of that fateful night in 2015, taking a blistering look at the corruption, greed, and lies that were exposed as a result.

Surprisingly, the documentary’s opening moments cover the fatalities caused by the fast-moving blaze. It does not linger on the events of the night. A few clips of video documenting the performance, the moment the club goes up in flames and the harrowing moments of the crowd rushing the exits are all you need. More accurately, it is probably all that most viewers will be able to take. It is terrifying and numbing. What we soon learn is the deaths did not end in the club. 37 additional victims lost their lives in the days and weeks following the event. Most of these deaths were not due to life-threatening burns but rather to bacterial infections. Such deaths are not normal and grieving families of the victims wanted answers.

Throughout the doc, Nanau always treats us all access observers; flies on the wall in the rooms where it all happens. There is no voice-over or talking-head interviews. Everything that unfolds occurs on camera without style or flair. We learn as they learn, with little insight, as to what is going on besides what is being said between subjects on camera. For that reason (and the quickly changing subtitles) it can be a challenging film at the time, requiring your full attention as it plays out like a “real-time” mystery where clues unfold when least expected.

As newspaper editor Cătălin Tolontan and his team of journalists (who work for of all things a sports newspaper) reveal the truth one surreal and troubling development at a time, we are sitting next to them at the table. Instead of the highlights, we are there as they dig closer and closer to the source of the corruption at hand. The stress, disbelief, and passion are written across their faces.

Collective plays out like a real-life, non-dramatized version of Spotlight or All the President’s Men. It is a tense thriller without all the cinematic cues in place to drive the narrative. What keeps it moving is the methodic actions of the few challenging the powerful for the sake of the greater good. If you can shake the abhorrent negativity of corruption the doc casts, it is actually quite inspiring. Something that is never more evident than the scene showing crowds in the streets chanting Tolontan’s name – the editor of a sports newspaper treated like a hero, and rightfully so.

Nanua’s approach is raw, patient, and unassuming. This is something that may not sit well with viewers more accustomed to the sensationalized docu-series and real crime show that are so popular of late. The edits are limited and the score is non-existent besides over the closing credit. Even when we meet the family of the victims, it is painful to watch, but never are the moments manipulative.

The doc also follows Romania’s Minister of Health, Vlad Voiculescu, as he pushes to understand and repair the broken system. It is a task that only becomes more monumental with each move. As he steps into this role, little could he know he would be battling propaganda, negligence, payoffs, coercion. What begins as political/medical drama and evolves into a mob thriller. It all reaches surreal levels to the point when maggots enter the picture it may not be the most surprising of revelations.

Among the gloom, there is a sprinkling of moments of hope that capture the human spirit. Unprotected moments with Tedy Ursuleanu, a survivor of the disaster who details her scars during a photo shoot make me regret even considering using the word disfigured to describe her. Again, Nanua uses restraint with his approach, providing access that lets us observe and appreciate what we are actually seeing. Beauty rising from pain; nestled into an endless string of malfeasance. These moments feel like a reprieve from all the ugliness surrounding them.

Collective turns out to be much more engrossing than expected. I found myself holding my breath with anticipation of what I would learn next. It is both depressing and hopeful, documenting both the worst and the best in people. One thing it certainly accomplishes is a reinforcement of appreciation of the press and the power journalism can yield. In a world where the truth is being not only blurred but forcefully erased, the necessity to protect it is all the more obvious. Over the last four years numerous films, both fiction and non-fiction, have earned the “important” or “timely” label. It makes you realize the unprecedented times we are in. The events of the film that may have felt far-fetched just a few years ago sadly, now feel commonplace.

Collective needs to be seen. It is a reminder to stay vigilant about our rights and the things we hold dear. As lies are being protected, the truth is distorted and dismissed.  We need to recalibrate our priorities. Films like this are a great reminder not only about the evils of the world but also how it only takes a few good people to fight it.  Wouldn’t it be wonderful to one day hear people cheering on our press and others who fight to deliver truth instead of names and ideas of evil men?

COLLECTIVE is available to stream on most digital platforms. 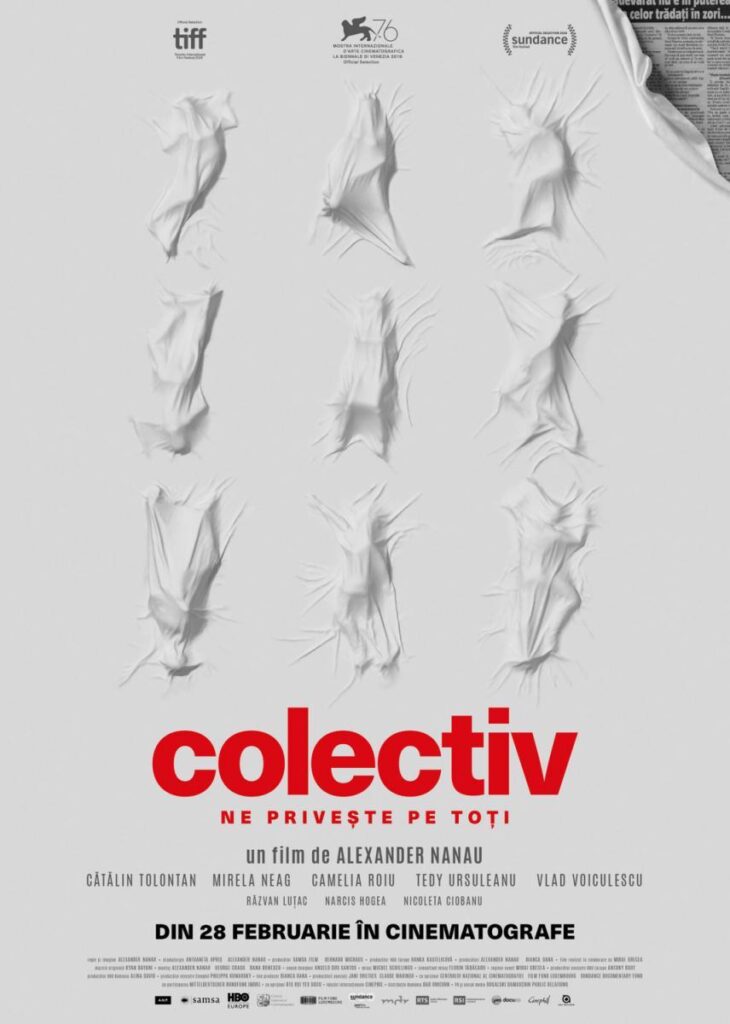 “Collective” takes a blistering look at the corruption, greed, and lies while celebrating the value of an independent press. As timely of a film as they come.