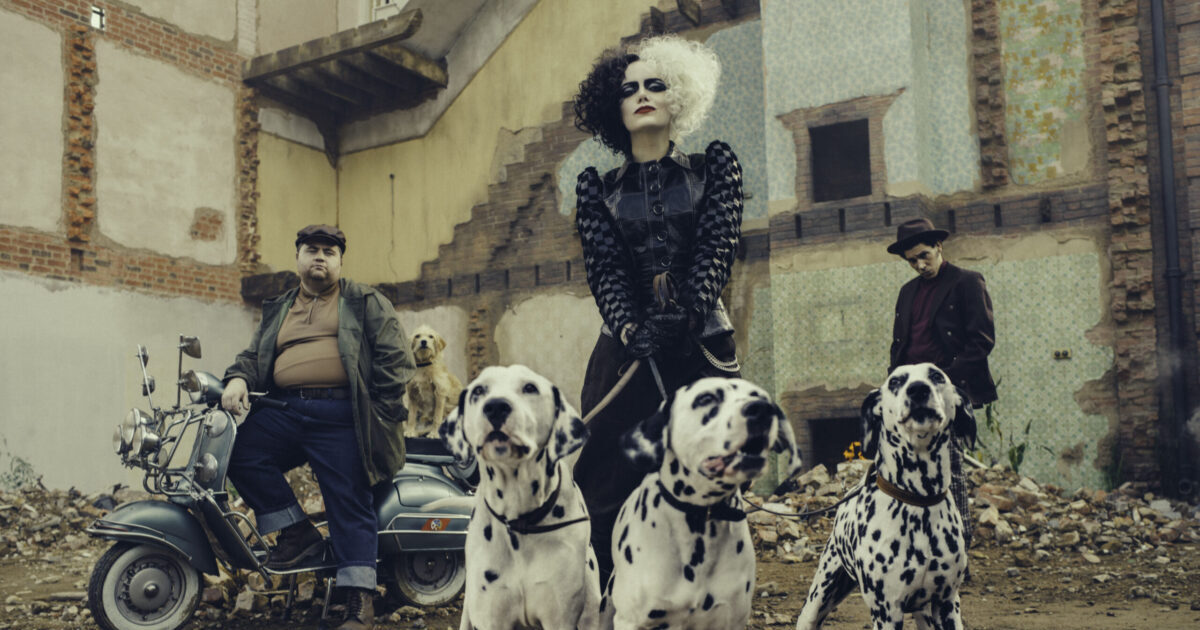 This article, written by our critic Steven Prusakowski, was previously published on our sister site, AwardsRadar. Be sure to check them out for film, TV, and awards coverage, celebrity interviews, and reviews.

I believed I had grown tired of the origin story. The once fresh concept had long ago grown stale to the point that even the phrase had taken on negative connotations. My fear was that Cruella would be one of those creatively stale films that dragged out the iconic villainess, only to put her through predictable and unsatisfying motions. Instead, director Craig Gillespie (I,Tonya) throws all my fears right out the window. Cruella is devilishly good! It is ultra-stylish romp that breathes new life into the origin film. Even referring to it as an origin film though feels like a bit of disservice since this is so much more here to appreciate. It is an instant classic that will be enjoyed for generations.

Led by a rocking performance from Emma Stone as the title character and a wickedly good Emma Thompson the film exudes style from start to finish. (If I happen to use the term ‘style’ over and over, forgive me because the film is feast for the eyes, and is teeming with it). The sets, the makeup, the hair and of course the costumes are all awards worthy. From the lavish high-end couture to punk rock glamor that capture the era perfectly. The art direction and production design are absolutely exquisite, but always remains grounded in reality. It all combines to builds a world you feel like you can live and breath in – not one of make believe.

And, while I have so far mainly focused on the aesthetics, this is in no way a style over substance situation. While it overflow with extravagance and flair, any such concern is quickly forgotten. The screenplay by Dana Fox and Tony McNamara develops into a deceptively layered and complex character study, tackling themes of self-discovery and drive. It accomplishes this all while delivering a rollicking experience audiences will eat up. The films wit, charm, and energy is fully complemented by one of the best soundtracks in memory. Absolutely brilliant needle drops by music supervisor, Susan Jacobs. Dozens of covers and familiar classics are used to elevate scenes – sometimes it with only a line or two. You may think a couple are on-the-nose, but will quickly disregard that as you are singing along.

We first meet our heroine in the delivery room where even as an infant she makes a statement with her signature black and white mane. Born Estella, she wears her hair with pride even as it make her an outcast from her youngest days right into primary school. It is there where she we learn she can deal it out even better than she can take it. Not a bad kid, per say, Estella just sees the world different than everyone else. She is a bit of genius, possesses a keen fashion sense and a owns a punk rock edge that cannot be tamed.

Even after requested of her mother (Emily Beecham), 12-year-old Estella (played charmingly by Tipper Seifert-Cleveland) struggles to keep the good version of herself in the forefront. Instead, the darker, more rebellious and mischievous side, Cruella, often wins out. While she tries her best to be on her best behavior there is an inner tug-of-war going on which leads her to seemingly spend more time in the headmaster’s office than in the classroom. This duality plays out beautifully throughout the film.

She spends her formative years pursuing her passion for fashion while living on the streets of London with some newfound pickpocket friends. Fast forward ten years and an adult Estella (Emma Stone) continues to live as a grifter with her her pals Jasper (Joel Fry) and Horace (Paul Walter Hauser). The not so legitimate profession put that gift for fashion into good use in a series of ingenious cons. Some that even make their patch-eyed dog, Wink, and accomplice as he shuffles away with a wallet in his mouth.

Estella’s thievery supplies her with the money to design more outfits that she uses to steal more money to design more outfits – an endless cycle that leaves her wanting more. Eventually, a stroke of luck has her working with The Baroness, be-all and end-all in fashion, played Emma Thompson who relishes in one of the most delightfully naughty roles of her career. Without giving too much away, not only is The Baroness her boss, she also possesses an heirloom of Estella’s that she must have back. This is where it gets good – and stay really good at being bad – finding an even sharper edge that slashes expectations in the most clever of ways.

Craig Gillespie, who surprised me by turning the story of an outcast from the wrong side of the tracks into the best films of the year with I, Tonya does so again here. I was taken back by how seamlessly he dabbled in genres, delivering an expertly conducted mashup that captures some of the best feels while nailing the right tone. Films like Oceans 11, The Devil Wears Prada, All About Eve and other favorites blended together into something recognizable, but always fresh. He captures the essence of the era while staying true to the character and the story first. He nails a tone dark enough service the character edge while striking the correct balance on the lighter notes.

This may be why is so easy to forget this is a Disney film based on one their most famous villains. While it feels connected to the original, it also works as a stand alone as film – one that can be enjoyed by a very wide audience. And, while elements of the original animated film make their way onto the screen they are never distracting and only briefly (and welcomely) slipping into fan service territory. This is Cruella story through and through

As an actress, Emma Stone has proven time and time again just how versatile she can be. This is no exception. It is inspired casting that pays off consistently. She disappears into the title role and that of her alter ego Estella. This is a career best performance. It is full of both powerful bold splashes and nuanced subtleties that peel away to reveal just what makes this moody character tick. And, in moments of true fashion deserving of a runway, she demands your attention as slinks and struts across the screen making the grandest of entrances. Keep an eye on the way she carries herself. Stones alters her body language to capture Cruella with precision, often with just the slightest twitch of a shoulder blade or a change in posture. She is the film’s best special effect.

Speaking of which, the film relies on practical effects (or well disguised CGI) avoiding the pitfalls of many films that are more in love with the technology than the character. During the press conference I learned that even though some look like special effects, Stone’s dresses were all actual fabric. One really stand out flows with a life of its own. The fashion is undeniably centerstage at all time in a perfectly cast supporting role, of sorts. It is just one of the elements of the film surely to monopolize the conversation. Makeup and hairstyling are also showcased with flair, whether it was Stone’s entrancing smoky-eye look or Thompson’s elegant vertical hairstyle, I could not stop starring.

As for performances, there are several standouts throughout, starting with young Cruella, Tipper Seifert-Cleveland. She possesses a naturalness to her performance that makes her relatable even as she is pummeling the school bully. We will be seeing a lot of her in the years to come. Paul Walter Hauser and Joe Fry have great comedic chemistry as Cruella’s crime family. Hauser finds the sweet spot going big but never too far over the top to deliver the film’s biggest laughs. John McCrea as a Bowie-esque fashion-minded friend is a lot of fun. Jamie Demetriou as Estella’s shop manager, Gerald, makes the most of his time on screen. He is wonderfully weasily – almost too much so. Kayvan Novak, Kirby Howell-Baptiste and Mark Strong all do well here, but are slightly underused given the 134 minute runtime.

As I break it down it is easy to realize just how much is crammed into this film. Yet, for the most part it feels breezy and has an almost kinetic feel, especially the during the wildly entertaining heists scenes, thanks to some crafty editing by Tatiana S. Riegel. Composer Nicholas Britell‘s haunting score draws some of the underlying darkness out of the characters. It is complemented by the cinematography of Nicholas Karakatsanis who goes back and between graceful dolly shots to a more raw, shaky handheld that subtly conveys the dichotomy between Estella and Cruella.

Sadly, while close it is not a perfect film. There is some unfortunately distracting green screen during a crucial scene that kept grabbing my attention. And, while I enjoyed the ride it may have benefited from one less heist scene. Still, it truly is a delight to watch with powerhouse performances, amazing costumes, great music, incredible art direction, and more. It all works so well together that I found myself looking past and flaws and just enjoying the ride. I watched it twice, enjoying it more with each viewing and am eager to watch it again soon.

While you can certainly can enjoy it at home on Disney+ (Premier Access), it really comes to life on the big screen which is one reason this a must see film of 2021! (If you are vaxed and feel comfortable doing so) this film begs to be seen on the big screen. Cruella may be the biggest surprise of the year. A sinfully playful ride that crackles with style. It should not be missed.