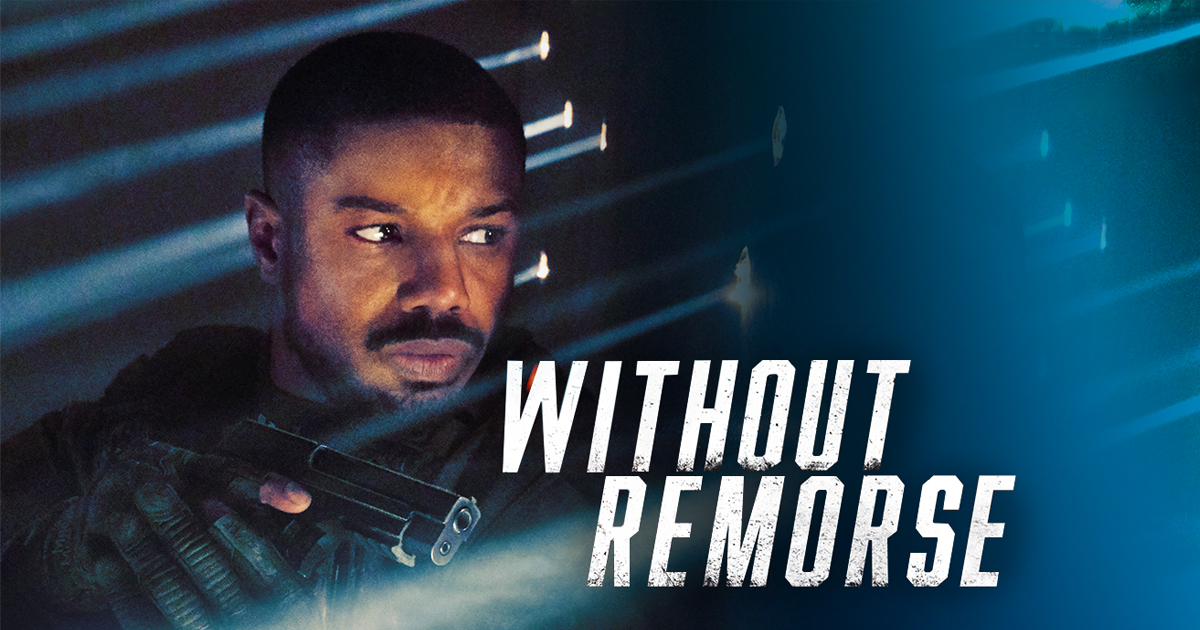 Amazon Prime Video’s Without Remorse is an adaptation of author Tom Clancy’s 1993 best-selling book of the same name, which acts as a prequel to his wildly popular Rainbow Six book and video game series. The film stars Michael B. Jordan as John Kelly, an elite Navy SEAL who, while seeking justice for the murder of his pregnant wife, uncovers a covert plot that threatens to engulf the United States and Russia in an all-out war. Without Remorse also stars Jodie Turner-Smith, Lauren London, Jamie Bell, Brett Gelman, Colman Domingo and Guy Pearce.

Like many other movies as of late, Without Remorse was originally intended for a theatrical release before making its way to Amazon, but Jordan feels that’s a benefit for the film. “I think it’s given access to films that you wouldn’t have an opportunity to go see,” says Jordan. “Certain films are obviously, intended to be shot and played in a movie theater, but we’re in an evolving time. With the pandemic last year, everything had to shift. We had to pivot and figure out how we were going to get our movies to the masses, so everybody had an opportunity to see them. We were lucky enough to be able to land at a place like Amazon to house this film. There’s something to being able to sit home and have instant access to the movies that you want to see. But there’s also something special about going out and having that theater experience, so I think it’s going to be a healthy balance in the future.”

Colman Domingo agrees that the home-viewing experience hasn’t diminished movie going. “It feels great to have that accessibility so that people can, can watch it when they want to watch it,” says Colman. “Hopefully, everyone has been setting up their adjacent bedrooms into screening rooms. So now I think they can get the full experience. I feel especially for a film like this, you want to see Michael and Jodi and all their glory on the big screen. So, you can do it on your own, and I think that’s awesome.”

“I think it’s important that we as artists are always in the flow of how times change, and that we must be like water and flow with it,” says Lauren London. “I also think it gives everyone an opportunity to watch the movie multiple times, as many times as you want, with just a click of your thumb. I know I had that experience with my kids when a movie came out recently, and my kids wanted to watch it at least three times a day. It gives you an opportunity to be aligned with the time then be able to have a right there on demand.”

Jodie Turner-Smith sees streaming films as a new form of a communal experience. “I think with everybody taking this in in the comfort of their own homes, that it means many more eyes on it,” says Smith. “It’s a way for us to be together now really be together, like when movies come out, you go on Twitter, and you see that everybody’s watching it and talking about it and live-tweeting. There’s a different sense of community now.”

Director Stephano Salima approaches streaming options like Amazon as an opportunity to give back to the audiences that have endured so much in the last year. “Movies are the sign of our times,” says Salima. “The movie business is facing a crisis like never before. I think that this solution may save a lot of jobs. At this particular moment, that it’s sad that people the audience is forced home, and we can give them as a sort of gift, films with such scope and that cinematic complexity, and we need to be thankful for that.

Prior to directing feature films, Salima’s previous experience was as a warzone camera operator, which he found helped inform him as a filmmaker. “When you work in a war zone, you have the responsibility to report that the reality you’re living in, in a truthful and respectful way,” says Salima. “And, and most of all, I think that you cannot dirty the reality with your own point of view. You don’t want to judge what you’re experiencing because it is up to the audience that is going to judge on their own. I think this is that this period of their objective reporting. feel that in the movies, it translates more or less in the same way. I need to inform, to study a lot to know everything about the word that I’m portraying. When I work on a character, I don’t want ever to judge, so I try to leave this pleasure to the audience. So, it’s a way to be close to the story, to your character, but at the same time to be respectful.”

The film was produced by Michael B. Jordan’s production company, Outlier Society, which has also produced films such as Fahrenheit 451 and Just Mercy, as well the Netflix series, Raining Dion. Without Remorse marks the company’s first action film, though Jordan credits his seasoned colleagues in making that transition easier. “Having experienced producers who really have been through the process before that have worked on high stakes, action movies really helped the process,” says Jordan. “I was able to follow their lead on how to package together something like an intense airplane crash; working with the visual effects supervisor and figuring out what we’re going to do practically. It was a learning curve for me. I walked away from this movie with more knowledge and experience and how to put those sequences together. I know when I shut up and listen. I was a sponge on this one.”

Michael B. Jordan’s John Kelly and Jodie Turner-Smith and Lieutenant Commander Karen Greer share a professional and platonic relationship on screen, and while their characters are not romantic, the chemistry between the actors was still very important. “Every time you speak to somebody, your relationship is alive in that conversation,” says Smith. “Whether you’re actually talking to them about something that is concerning your relationship or not, the trust that you have, the respect that you have, the love that you have is always alive. It always felt important to me that we just tried to infuse that in our scenes, even when we’re butting head and even when I’m really not understanding what he’s going through, but I’m trying to be there for him.”

“Putting my producer hat back on, we really wanted to work through finding that balance between camaraderie and that brother or sister relationship that they had and make sure that the audience understood that,” adds Jordan. “We didn’t want anybody to misunderstand the relationship dynamic. I think we want to be really clear that they loved each other, but that they had each other’s back, through thick and thin. We didn’t want anybody to assume or try to forward think that their relationship would go down a road that it wasn’t supposed.”

John Kelly’s other relationship on-screen relationship is with his wife Pam, played by Lauren London, who was able to draw from her life to breathe life into their relationship. ”I think you bring your own life experiences to your art, and I always love artists that work like that,” says London. “I try my best to be honest in that way. I think just being a mother and a partner and experiencing love to the degree that I was able to experience it brought tenderness and vulnerability to his character. And Michael, being a really good friend of mine before we ever worked together, made it really comfortable and respectful and gave the space for me to be able to be so vulnerable in this character at the time.”

Being a Tom Clancy story, Without Remorse has its share of action, and while Jodi-Turner Smith has experience with physical acting, there was an added element to this film that made it a bit more difficult for her. “I was pregnant at the time, so that definitely added a level of intensity to it that I didn’t anticipate,” she says. “I’m a strong person, I’m an athletic person, and I can push my body to the limit, so I thought this was something that I was definitely ready to throw my body into. I’ve trained for many things in my life, but what was required of me physically with carrying this baby in doing this film is unlike anything that I have ever experienced.”

Among the many action sequences are a pair of underwater scenes, which required Jordan to spend a considerable amount of time submerged. “Breathing is definitely a trained exercise, he says. “If you stop exercising that muscle, you can definitely lose it. We knew we had these sequences early in the script development, so underwater training was something that we spent a lot of time on. Stefano looked at me and said, ‘Mike, you know, you got to do all these right?’ and I said, ‘Of course. Easy, no problem.’ So, we hooked up with some military divers, and we spent time in the tanks, putting us under stressful situations where we would have to problem solve, work through malfunctions and gear failure, and work through military equipment like rebreathers, which are machines that these soldiers would wear to suppress all the bubbles, so they could breathe in the water without leaving any physical traces. It was a lot of detailed training that we went through for the water scenes. During filming, I could hold my breath for about three minutes or so.”

For Jordan, a movie with this type of action was exactly what drew him to films as a child. “I’m an action junkie,” he says. “As a kid, just, these are the movies that I watched and that I always wanted to be in one day, and I actually had the opportunity to train and do a majority of my own stunts. We had an incredible stunt team. We still worked with stunt doubles and people who vet these sequences and made sure things were safe and taught us the proper way so that we’re able to handle ourselves. They assembled this incredible stunt team that allowed us to train at high intensity that so when we showed up on the day, we were able to do the things that we needed to do. We got banged up throughout the process, but it was so worth it.”