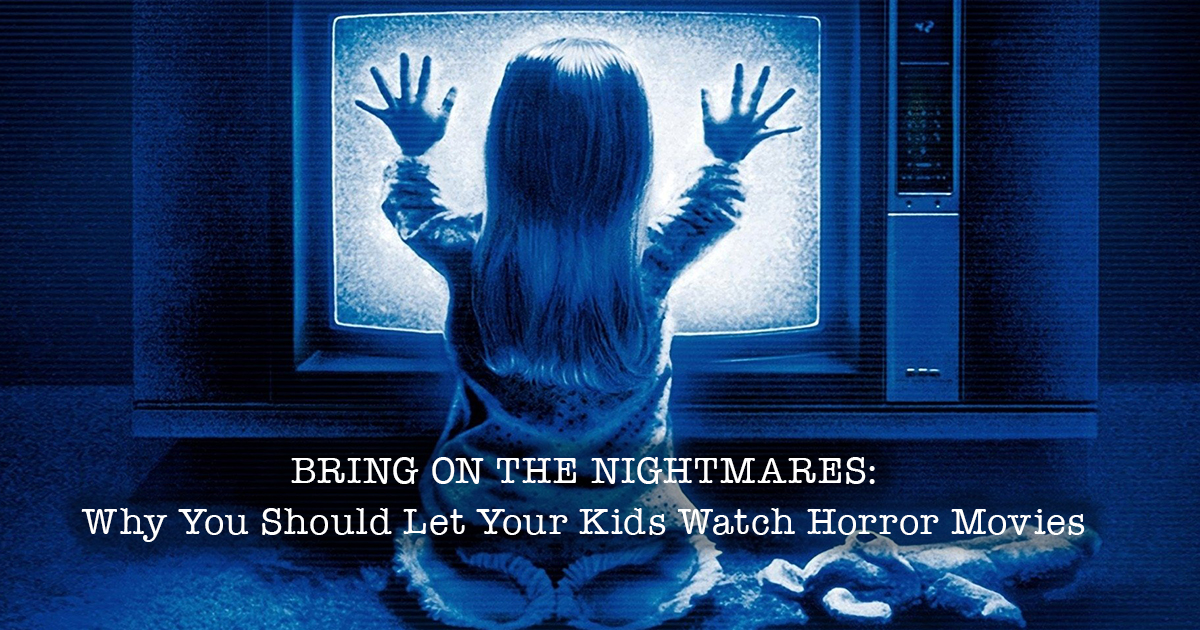 At 42 years old, I am of the age where being childless places me firmly in the minority of my family and friends. I am always amused at the serious deliberation amongst parents about what age to allow their children to experience scary and unpleasant media. They worry about the effect it will have on their kids. Will this movie hurt their children, scar them, leave a lasting mark because little Suzy watched that scary Halloween movie? Will it give her nightmares? The caution derives from parental love and concern. I usually keep quiet because, having no children of my own, who am I to give advice or judgment? However, my own experience makes the entire exercise seem pointless.

When I was a child I suffered from severe nightmares. Whether it was before my mother died of breast cancer I cannot say. The past is foggy and I don’t remember much about being a kid besides the greatest hits. I do remember the nightmares. I remember the gnarled giant crouched outside the dark attic room and the oblivious adult who opened the crooked door to his knocking, allowing him to crawl through the narrow entrance straight at me. His pale, knotted hand stretched towards me and I woke up in my bunk bed, drenched in sweat, breathing heavy. I must have been 7 or 8 years old.

Another nightmare; this time it was my mother at the front door to our house. She wanted to be let in. But she was dead. She had died over a year ago. It was night time and the porch light was on. Her beautiful pale face was battered black and blue and she was hunched over like she had just crawled out of the grave. That particular nightmare was more sad than scary but the results were the same; eyes popped open, heart pounded – I stared at the bunk bed above. Sleep was a terrifying place.

After I awoke from a nightmare, the events usually played out the same every time. The light was on in my room, of course. I had two options. I could lay under the covers and hope I remained concealed from whatever monster or creature was out there; or I could jump up from my bunk bed and out of my bedroom, down the darkened hallway, and scurry up the carpeted stairs to my dad’s room, to safety. I don’t know how many times I must have made that mad dash through the house but my dad always let me stay the rest of the night.

My subconscious, of course, knew my habits all too well and constructed a devious nightmare. I lay in bed, the light on, staring at the darkened hallway, when a pale face of a demon or some other type of Drude peaked out of the darkness, into my room. He looked at me with a wicked smile on his black lips framing sharp teeth and gave a wink with his bloodshot eye before retreating back into the hallway, disappearing into the dark. I shot up from my bed; it was a dream – and stared at the same dark hallway from my nightmare. I was frozen in fear – too scared to take my eyes off the hallway and duck under the covers yet too terrified to run into that blackness to reach my father’s room. 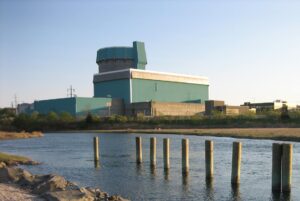 Being raised by a single father in the 1980’s was…interesting – especially since my dad was a pony-tailed-sporting nuclear physicist who grew marijuana in the garage and brewed his own beer. He may have fit right in amongst certain communities (like Berkley or Marfa), but he was an oddball in Shoreham – located on the north shore of Long Island, NY; which is where we lived. By “we” I mean my dad, my two older brothers, Jesse & Rio, me and my younger sister, Rosa. Our house was on Bradley Drive, a typical suburban street that dead-ended into a sod Farm that stretched for miles in all directions. Growing up this way had its perks. My dad let my brothers and I rent whatever we wanted from the local video store. He would get his pick (maybe Terms of Endearment, Romancing The Stone, The Right Stuff, or whatever popular drama just arrived) and we would get ours. Rated PG-13. Rated R. It didn’t matter. The only rule was that we had to agree on it. Which means I mostly watched what my older brothers wanted to watch. Which means I watched a lot of horror movies. 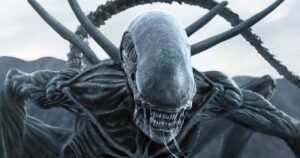 I must have been 9 or 10 when I first viewed Alien. It was a huge hit in our household. Rio had a model of the Xenomorph that I found as terrifying as the movie. It was one of the few toys of his I refused to play with. My G. I. Joe’s could take on any villain but that Xenomorph was just way too scary for playtime. I remember watching John Carpenter’s The Thing for the first time. I saw half the movie through clenched fingers over my eyes. The imagery and horror blew my mind. It was scary as hell, and even worse was the idea of the creature. It was hideous and powerful like Ridley Scott’s Xenomorph yet it would twist, transform, and defile the fleshy human bodies that it consumed. I wouldn’t learn until later, when I watched A Nightmare on Elm Street; if the terror and anxiety became overwhelming, the secret was to put your fingers in your ears, not cover your eyes. If I closed my eyes, I could hear all the cries and screams and my imagination was almost worse than anything Hollywood could cook up. Better to watch the visuals but without the creepy score and sound effects; the muted experience was survivable. 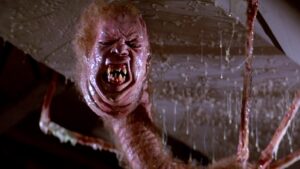 Some of the most jarring and awful experiences weren’t necessarily horror movies. In Robocop, ED-209 short circuits and mows down an office worker. The blood fountains while his body is torn to shreds, shaking on the conference table. It was horrific. Even worse (and maybe one of the most disturbing imagery from my childhood) was Emil, one of Clarence Boddiker’s henchman who takes a bath in toxic waste and is transformed into a melting flesh monster. The idea that a person could be melted and still survive was more disturbing than death. Of course, Emil is splattered like a melon on Clarence’s car. Gross, but almost a relief. 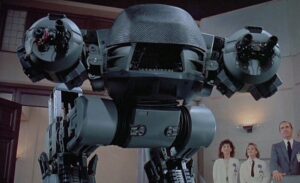 Did watching these horror films give me nightmares? My nightmares started long before I saw any horror films. When I did watch them, they never entered my dreams. As a kid who lost a parent, these fantastical movies were an escape from the terrors of life. It was my darkest fears and horrible thoughts shown back to me through a funhouse mirror. So much of childhood was adults instructing me how to behave, how to speak, how to act. For us kids who experience death and darkness, it seems all a charade. I figured this out at 7. I didn’t desire happy endings and smiles or a nice tidy movie. That wasn’t my world. That wasn’t reality. Bad things happen to good people. Unlike teen romances and screwball comedies, horror movies didn’t lie. Horror movies comforted me. The main result of watching all of these horror movies as a kid is that they made me a horror addict for life. I’ll let you judge the merits of that fact. So if asked whether or not my niece or nephew is old enough to watch The Monster Squad, I usually shrug and repeat, “what’s the worst that can happen.” And I mean it. Look, don’t show your 4 year-old the Exorcist. Use a little judgement. But shielding children from their imaginations will not protect them from reality. In fact, you may just be doing them a favor.

I distinctly remember the nightmare when everything changed. I was 12 years old and dreamt I walked through a maze of white-walled rooms manicured with intricate landscaping and elaborate statues. As I walked past an ivory Bhudda-looking statue that loomed over me, I had the feeling it was watching me; I was certain it was going to come to life and attack me. Which is exactly what it did. In jerky, robotic-like movements, the cherubic statue climbed down from his pedestal and lumbered towards me. The dread in the pit of my stomach kept me frozen as it approached. Then something snapped. I was angry. If it was going to eat me, I was going down fighting. I punched, kicked, and screamed at the statue. It stopped its assault and began to retreat. Then the dream shifted. I was in a different room without any plants or statues, then I sprang awake in my bed. I was elated. I had beaten the nightmare. It was the last time I ever woke up afraid.

To this day, I still have twisted dreams: zombies, monsters, body horror straight out of a Cronenberg movie, gaping, bloody appendages with teeth or aliens that burst from my flesh. I consider these dreams to be free horror movies. I marvel at the experience and eagerly return to sleep for more. The anxiety, the fear, the dread is gone. My anxious dreams now consist of college exams for classes I forgot to attend or a work deadline I completely forgot. The real world can be a scary place; my imagination is a playground for dark and twisted delights. Bring on the nightmares.

DISCLAIMER: Look, we’re not recommending you show your 4-year-old The Excorcist. No need to torture them.Use your best discretion. The advice being dispensed here is for your entertainment. Please make the best decisions for your family, even if that means Alien for a 4th grader.