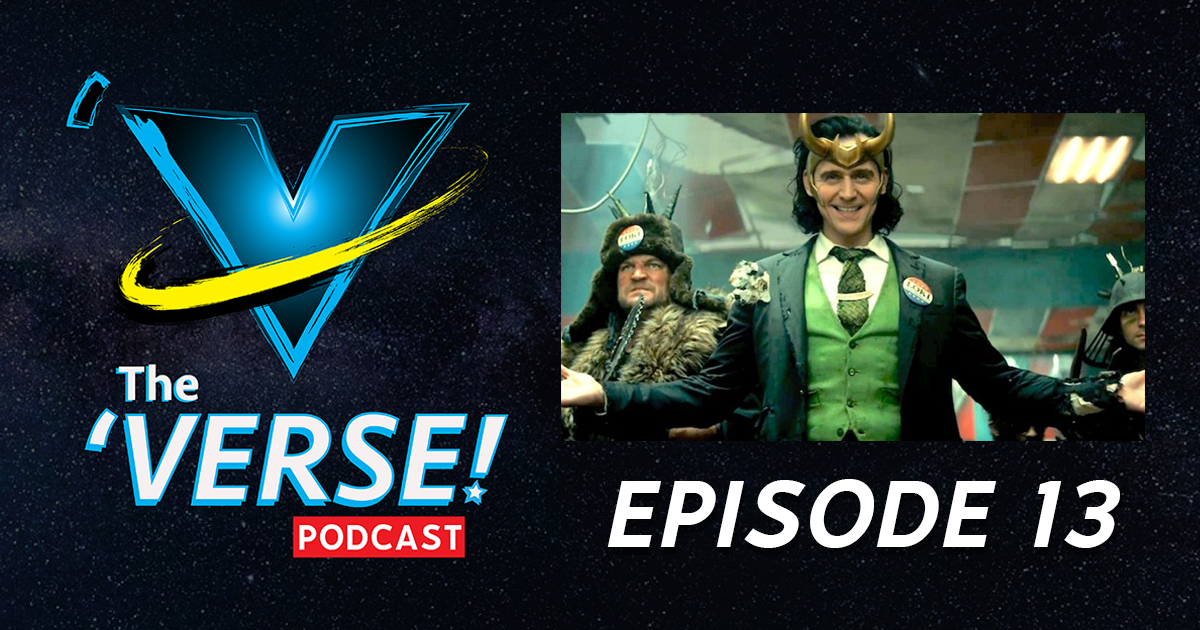 It’s that time of the week to step into The ‘Verse! – the podcast where we visit different corners of the cinematic universes from Marvel, Star Wars, DC, and beyond!

The moment you all have been waiting for has arrived and we are FINALLY talking about the latest Disney+ series Loki. The first episode and latest addition to the MCU definitely gave the ‘Verse! Squad mixed emotions but there was one thing we could all clearly agree upon: Tom Hiddleston and Owen Wilson are perfectly cast and none of us have a future in impersonating Wilson *DISCLAIMER* (listen to the post-credit scene if you dare). Even though our impressions may have been a failure, they provided the Squad a good laugh just as Hiddleston provided audiences on multiple occasions throughout Loki’s introductory episode. Did you know Loki was also D.B. Cooper? One of the greatest unsolved crimes in American history was actually just a bet between the God of Mischief and the God of Thunder. F.B.I., good luck with that one!

This first episode of Loki may have been the most action-packed but boy did it come with its fair share of revelations from the TVA (Time Variance Authority). Here’s another fun fact, did you know that infinity stones, you know the entire premise of the first three phases of the MCU, are completely and utterly obsolete at the TVA? We’re talking so obsolete that there are multiple copies of each stone to the point that employees use them as paperweights. Have the past 10+ years of our viewing lives been worthless?? Perhaps this is also because we were treated to a recap of Loki’s life from 2012’s Avengers to Infinity War in less than 5 minutes. Either way, there is much more in store for this season of Loki as there is an even much more mischievous and dangerous time-variant lurking in the sacred timeline…

On top of our Loki coverage this week, the ‘Verse! Squad broke down all the latest cinematic news starting with casting additions to the Disney+ Marvel series She-Hulk, the trailer for He-Man and the Masters of the Universe: Revelations, Star Trek: Deep Space Nine coming to Blu-Ray (yes we reached ultimate nerd status here), and Emilia’s News. We also may or may not have uncovered a new blindspot for one Squad member. Harry Potter and the Lord of the Rings aren’t in the same franchise?

Besides covering some new and old blindspots, the ‘Verse! Squad will continue to cover Loki over the next few weeks but be sure to check out some of our super special BONUS episodes which include interviews with M.O.D.O.K. co-creator Jordan Blum, Invincible showrunner Simon Racioppa, the MARZ FX team from WandaVision, and Henry Jackman, composer for the Falcon and the Winter Soldier.

Make sure to send us any and all questions, comments, and theories @theVerseCast on Twitter and subscribe to the ‘Verse! wherever you listen to YOUR favorite podcasts. How about Spotify, Apple Podcasts, Google Podcasts, and Stitcher just to name a few! You can also find us @ScreenRadar on Instagram, Twitter, and Facebook.