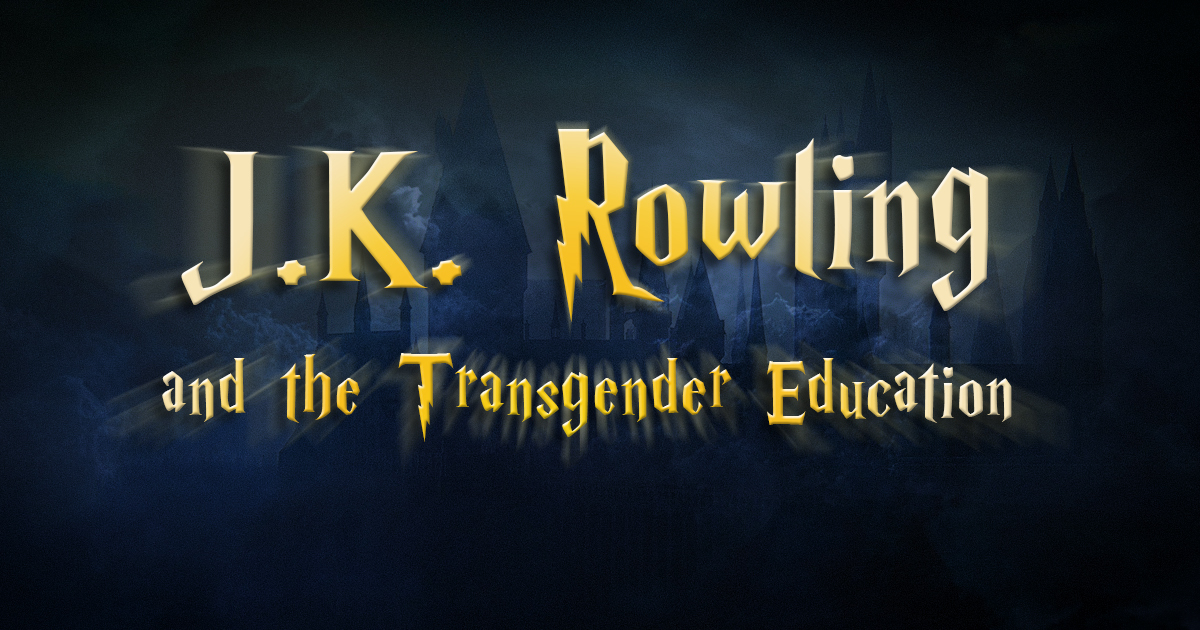 Every July before this year, I would re-read the Harry Potter series. Sometimes it took me a month, sometimes it took five, but no matter I would read the entire thing, start to finish. Growing up, and well into adulthood, Harry Potter was a series that gave me hope, joy, and strength. Even this year, as a public health professional, I’ve found myself drawing parallels between the Ministry of Magic’s denial upon Voldemort’s return, and people who deem themselves “anti-maskers” (or as I call them, pro-pandemic).

These stories wove their way into every aspect of my young life and shaped who I am as an adult. In the middle of summer, I always look forward to starting the stories over. At Halloween, I want to think about Deathday parties and Dementors and trolls. We recently had our first snow of the year and my first thought was how nice it would be to curl up and read one of those books, paying particular attention to the scenes in Hogsmeade or anything during the Christmas holidays.

All of this to say, the decision not to read the stories this year did not come lightly, and in fact, causes me great dismay. But this dismay is nothing compared to the anger and resentment I feel towards J.K. Rowling.

I’m 33 years old, and I’m a non-binary transgender person. Transgender means I am not the gender that’s on my birth certificate. Non-binary means I’m not male or female, but somewhere in the middle. 33 means I look like I’m 20 and act like I’m 80. To describe me properly, you would use the pronouns they/them/their(s). So, you would say “they wrote an essay,” “I am friends with them on Facebook,” “their jokes are terrible,” etc.

You may have heard about J.K. Rowling’s comments regarding the transgender community, but if not, here is a brief summary: Rowling first retweeted an op-ed piece that discussed “people who menstruate,” taking issue with the fact that the word ‘women’ was not used in the story, commenting, “‘People who menstruate.’ I’m sure there used to be a word for those people. Someone help me out. Wumben? Wimpund? Woomud?”

After receiving backlash for her comments, Rowling double-downed, tweeting, “If sex isn’t real, there’s no same-sex attraction. If sex isn’t real, the lived reality of women globally is erased. I know and love trans people but erasing the concept of sex removes the ability of many to meaningfully discuss their lives. It isn’t hate to speak the truth.” She also tweeted support for a tax specialist who’d lost her job for what were deemed ‘transphobic’ tweets, drawing further criticism (a full breakdown of Rowling’s comments can be found over on Glamour.com).

Before you read any further, please note that if you’re cisgender (not transgender), this is not a place for your opinion. I’m speaking from my experience as a transgender person, who feels hurt and betrayed by an author I used to admire. One of her Achilles’ heels on this matter was her inability to be quiet and let trans people speak for themselves. So here I’m going to break down the details of why this is so wrong, why people are hurt, and why it matters.

There is a difference between sex and gender. Sex is your “parts”- genitals, hormones, etc. Typically, people’s bodies will align with either “male” or “female” parts, but not always. Up to 1.7% of the population is born intersex, or with characteristics of both sexes, or a sex that is ambiguous. That’s about the same number of people as those with red hair (looking at you, Weasleys). It’s more common than you think.

Gender, on the other hand, is your internal understanding of who you are—whether you’re a man, a woman, or some other gender. Imagine for a moment that you have cancer or get into some horrific accident, and one or more of your sex organs had to be removed. Would you wake up in the morning and wonder who you were? Of course not! Women who have had mastectomies or hysterectomies due to cancer are still women. Men who have had to have their testicles removed are still men. If you found out that your body didn’t produce the right hormones, would that change your understanding of whether you were a man or a woman? No, you would still know who you are, just as you always have. Transgender people know who we are, usually from a very young age. That knowledge is your gender. Transgender people’s gender just doesn’t align with whatever is on our birth certificates.

J.K.Rowling’s comments reinforced the idea that sex is the only determining factor in who someone is. We say things like “people who menstruate” because some men and non-binary people were born with a uterus and do menstruate. It is not “erasing the experiences of women” to include people with those same experiences who are not women. It is instead broadening the language to include people who have been historically erased and overlooked.

J.K. Rowling is not any of the following:

– A psychiatrist or psychologist

– A researcher or scientist

– An ally to transgender people

So, therefore, her opinions about the “danger” of transgender care for children and adolescents have absolutely no basis in fact. All long-term studies of transgender people show an increase in mental health and quality of life after any gender-affirming intervention, including hormones and surgery. Youth who are unable to transition are six times more likely to experience depression, three times more likely to abuse substances, and eight times more likely to attempt suicide. When we allow youth to transition, all of these risks are reduced to normal, which means transgender children are no more likely to attempt suicide or abuse substances than their non-transgender peers. (For more information, check out https://familyproject.sfsu.edu/).My point here is that unless someone is asking about the use of Skele-gro as part of their transition, Rowling has no expertise to speak of.

Anyone with money and a platform has power and influence, regardless of their claim to fame. Usually, this power is used for good deeds and advocacy; Cher started Operation Helmet, Elton John has supported multiple HIV/AIDS organizations, Dolly Parton gives free books to kids, you get the picture. Using your platform to support something is not inappropriate—in fact, it’s admirable. But J.K. Rowling has chosen for her platform to be an attack on transgender people. Instead of funneling some of her millions into rigorous research on the effects of hormone therapy and transition, she writes essays about why we’re wrong and don’t know who we are.

Instead of helping fund organizations like The Trevor Project, which aims to reduce suicide among LGBTQ youth, she vocalizes her displeasure that men can menstruate. Instead of listening to the backlash and reflecting on her lack of expertise, she doubles down on her convictions and publishes a new book about a cisgender man who dresses like a woman to attack cisgender women—the very argument many people use to deny transgender people access to the correct bathroom. It should be noted that there is not one documented case of a transgender person assaulting anyone in a bathroom, but hundreds of cases of transgender people being assaulted in bathrooms.

Eventually, I may be able to read the Harry Potter books again without thinking about the author. I won’t be purchasing anything new, visiting Harry Potter World again, or doing anything else that would give a fraction of my money to someone who would deny the validity of my gender. This is not about “being offended,” this about being an expert in one’s own experience, and no longer allowing people without lived experience to speak over us. In the same way that I, a white person, cannot speak for Black or Indigenous people, J.K. Rowling and other cisgender people should not speak about the transgender experience. I hope in the future Rowling sticks to what she knows best—fiction and world-building—and leaves science, the nuances of gender, and the benefits of affirmative treatment to the experts.

Charlie Borowicz is a Health Project Manager with the Allegheny Health Network in Pittsburgh. They develop and present trainings on transgender healthcare, support inclusive policy revisions, and provide care navigation services for trans and non-binary patients. They serve on the leadership boards of the Tri-State Gender Collaborative and TransBuddy, both based in Pittsburgh, PA.

For more information, visit TransEquality.com or HRC.org. Also, episode 152 of the Imaginary Worlds podcast addresses the importance of Harry potter to the LGBTQIA+ community, and Rowling’s subsequent alienation of trans readers.