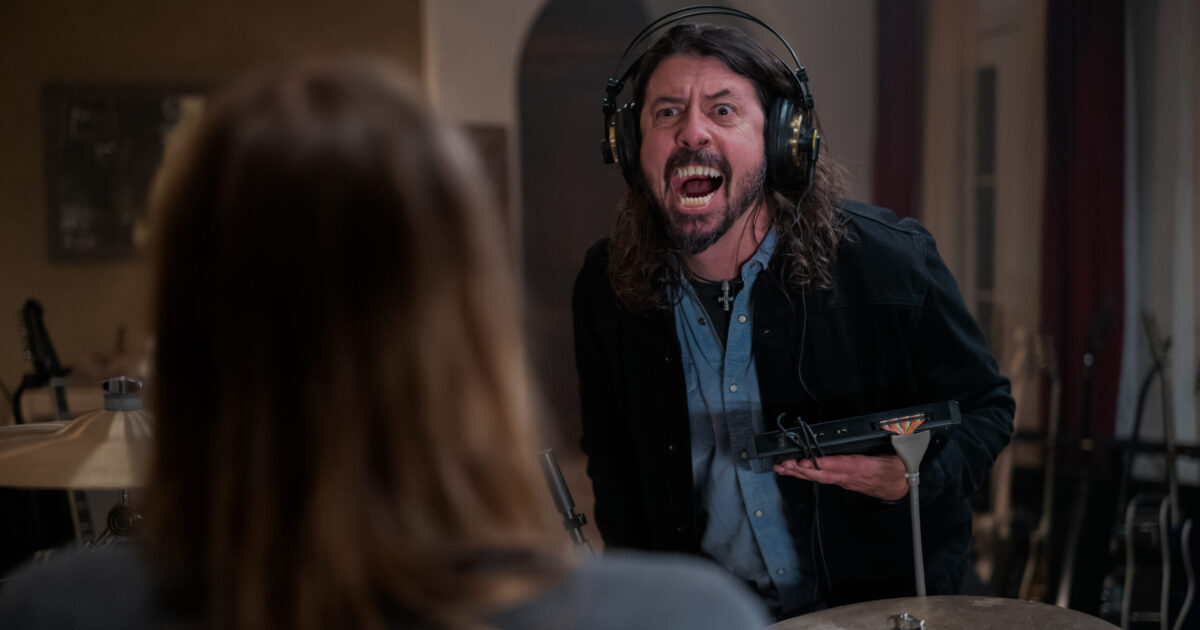 (This review was originally published on our sister site Awards Radar.)

For the last couple of decades the Foo Fighters have helped carry the torch of the once dying art of music videos. As the MTV era faded and the YouTube era began, Foo Fighters consistently delivered some of the best music videos of all time. Each video was funny, well-produced, and most of all entertaining. Most of them told a story. Essentially they were mini-movies set to the tunes of Foo Fighters. It would only seem natural for these guys to eventually make their own feature film. Well, they did. Studio 666.

I have to admit, when I started watching this film I was having a bad day (more accurately a bad year.) My mind was ready to tear the film a new one. At first I found myself making a list of its “flaws.” Then, about twenty minutes into it, I realized my note taking had stopped. My mood completely changed. All the stressors in my life had a temporary reprieve. I was having a great time. Maybe rock ‘n’ roll is the best medicine. My advice to you as you watch Studio 666 (and read this review) is as follows: turn your critical brain down to about 6, turn the fun brain up to 11 – then strap in and enjoy. This is a bloody fun ride!

Dave Grohl stars as himself in director BJ McDonnell’s STUDIO 666, an Open Road Films release. Credit : Courtesy of Open Road Films
The story, by Foo Fighters’ frontman Dave Grohl, serves as background vocals to the outrageously brutal kills – which are the main act here. The film also stars Grohl and the entire band as themselves (Taylor Hawkins, Pat Smear, Rami Jaffee, Chris Shiflett, and Nate Mendel) who move into an old mansion in southern California where they plan to record their overdue 10th album. Little do the rockers know that their new studio has a dark past, a very dark past. As the group struggles to find their sound, a demonic force takes over Grohl making him willing to do anything to deliver a hit record. Death, mayhem and possession are all on the set list.

Other bands like The Beatles, Tenacious D, The Monkees and more have gone the feature film route with varied results. Most did so without the use of demons, besides The D whose Pick of Destiny actually starred one Dave Grohl as Satan (what a small demonic world.) This film does not reinvent the genres it borrows from – we have seen a lot of it before in other horror films; glowing eyes, fangs and voice effects. Touches of everything from This Is Spinal Tap, Evil Dead, What We Do In the Shadows, to Scooby Doo, and others are found here.

(L to R) Nate Mendel, Rami Jaffee, Pat Smear, Taylor Hawkins, Chris Shiflett, and Dave Grohl star as themselves in director BJ McDonnell’s STUDIO 666, an Open Road Films release. Credit : Courtesy of Open Road Films
As actors it is fair to say that you should not expect the band to be in any awards talk next year. Grohl fares the best, keeping his performance restrained enough to allow him the wiggle room to punch it up to the over-the-top when needed. The rest of the guys retain their music video thespian levels of acting. It serves the source material well enough and it actually grew on me quite a bit… as if good acting would have taken away something.

The more the blood started flowing, the more I found myself enjoying the film. The gore is played for laughs, never gross enough to feel real. It had me laughing out loud more and more with each addition to the body count. Tony Gardner’s practical special effects are reminiscent of the classic horror film. There’s nothing subtle about how the camera holds for the money shot ensuring every creative kill front and center. Each one is so telegraphed you know just what to expect. Then they deliver it somehow making it even funnier. I found myself chuckling and shaking your head at the same time as the screen with shocking, but comedic, gore and viscera.

Of the supporting cast, Will Forte who is the most natural fit for the film (check out his complementary work in Extra Ordinary,) fares best. Others, like Jenna Ortega (Scream) could have used much more screen time for my taste – most are restricted to cameo-sized servings. Then again when Jeff Buhler and Rebecca Hughes’ screenplay tosses around lines like “Eat a bag of dicks“ and “Fuck meditation in the ass, Rami!” – maybe it is better to leave the heavy lifting to Grohl.

Will Forte stars as Delivery Guy in director BJ McDonnell’s STUDIO 666, an Open Road Films release. Credit : Courtesy of Open Road Films
Director BJ McDonnell does a serviceable job helming his first feature. Impatient viewers and/or non-Foo fans will notice the often video game pacing. It had me waiting through some lulls in anticipation of that next big moment. Enough with the cut scenes, I want action. 15 minutes could easily be trimmed from the 106 minute runtime to tighten it up. While some of the comedic insights into their recording sessions were interesting they were some of the moments that become a little repetitive after a while. But, besides some blatant gotta-pay-the-bills Doritos product placement, the biggest sin is that for a horror film it is never scary. Blood-splattered and dark, but not a chill to be found.

The Foo Fighters made the film they wanted to make – a nod to classic horror, full of wall to wall ​​tongue in cheek humor. Sure, much of it feels like the results of someone taking notes during a late night ‘Hey wouldn’t it be funny?’ conversation. With that said, if in the right spirit it may be just what the doctor ordered.

Intention is everything for Studio 666, allowing it to get away with some cinematic sins that would be damning for other films. It succeeds at being the film the Foo Fighters set out to make. Much of the amateur vibe has its charms, especially the performances. The need for editing tweaks evident throughout are less tolerable. Overall though, it is a rockin’ fun time almost certainly destined for cult status. A demented love letter to the fans with enough music to satisfy. Those who typically put their noses to this kind of film should probably just go elsewhere to be entertained. Fans of the band and those ready for a fun time, prepare to rock on!

The Foo Fighters set out to make a horror comedy that both fans of their music and genre will enjoy. And to their credit, it often rocks.