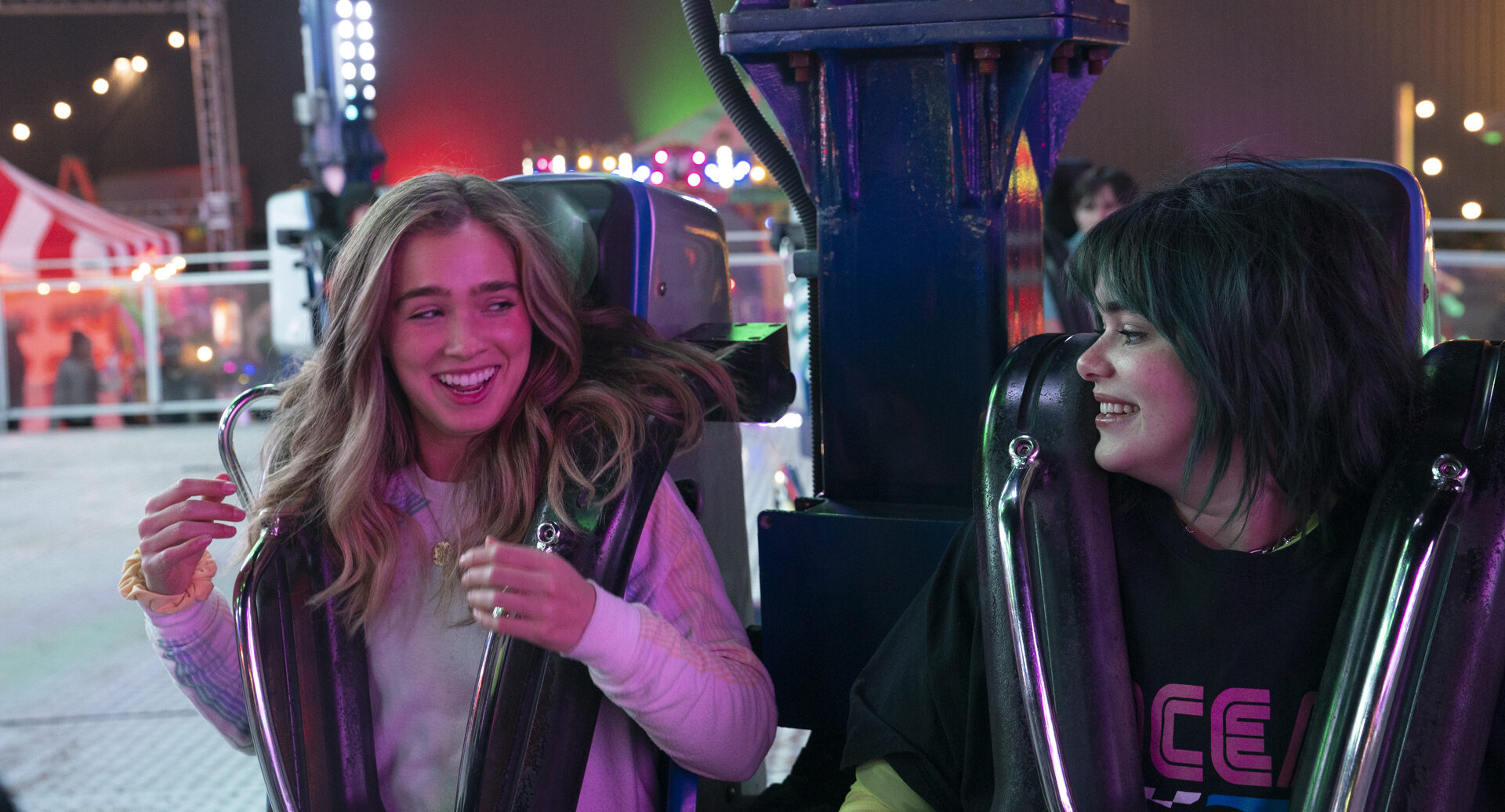 High school student Veronica’s (Haley Lu Richardson – Five Feet Apart) day isn’t going as planned. Thanks to a case of the butterfingers while taking a pregnancy test in the school bathroom, her newly confirmed pregnancy has accidentally been revealed to her former best friend Bailey (Barbie Ferreira – Euphoria). To make the less-than-ideal matters worse, the pregnancy test also unexpectedly ends up in the hands of the clique of popular girls at school who are determined to track down who the pregnant student is – a sort of ill-intentioned, Mean Girls version of Nancy Drew.

For most films that would be enough ground to cover, but that is just where things start in Unpregnant, the new HBO Max film from director Rachel Lee Goldenberg. What follows is an offbeat female road-trip comedy, which is an enjoyable ride even when attempting to get more mileage out of the premise than necessary.

Veronica’s unexpected pregnancy puts her in quite a predicament. She is afraid to tell her religious mother and even more reluctant to turn to her friends who would certainly escalate her situation into a school scandal. Out of necessity, she turns to her estranged friend Bailey to take her on a thousand-mile trek in her kick-ass blue Trans-Am, from Missouri to Albuquerque, to get an abortion. Along the way, there are enough mishaps, revelations, and odd encounters to keep things entertaining. All this while delivering a surprisingly mature and sincere look at abortion.

The unscheduled rekindling of the girls’ relationship is the core of the film. Having them confined to the unescapable interior of a car is the perfect situation to put a magnifying glass on the differences that set us apart as people. Side by side they could not appear more different. Bailey is the all-American, blonde, grounded, valedictorian – kind of a plain Jane, while Bailey is the wild-child, goth, jet-black and green hair, a non-conformist outcast. Even though some of these differences seem a little exaggerated they create opportunities to touch upon important themes.

The pair explore their differences and inevitability rebuild their broken bond of friendship while hitting on a range of topics related to what is it like to be a girl in today’s world. Toxic masculinity, trust, social media bullying, and sexuality – to name a few. The coming-of-age vibe will click with the target audience even if it feels a little surface level to older audiences. Over the course of the journey, the pair also have some outlandish escapades, along with heavy doses of Kelly Clarkson and Klingon added to the mix.

The wild excursions peppered throughout are entertaining enough, adding to the care-free romp feel that was so successful in Olivia Wilde‘s Booksmart. While amusing it feels like we are following a calculated roadmap of time-filling distractions. They shift gears sporadically leaving Veronica’s matter in the dust.

Compounding the feeling is Bailey’s nonchalant attitude, contrasted by Veronica that Richardson’s performance makes relatable and empathetic with flashes of reluctant peculiarity. While Ferreira’s performance is refreshing and bold, at times her character seems out of tune with the weight of the situation – lost in a different world. It is both kinds of frustrating, immature, and makes her seem selfish. After some especially grating moments, I did not question why the friendship became strained to begin with. At the same time, there is a sweetness to their chemistry that triggers nostalgic feelings of being young. It nicely captures a glimpse of a time when we unafraid and unaffected – goofy, dorky, and happy to be so. I guess I too am a bit all over the map here.

Goldenberg’s handling of the heavier topics where the film finds its real-world edge. Abortion is not just a plot device. It is approached respectfully in a way that normalizes the conversation that had been often relegated to whispers. Many facets of the abortion issue are covered with finesse, using compassion, and at times humor. The film paints a good picture of how attitudes about abortion vary from person to person, while also shining a spotlight on the differing abortion rights from state to state. Veronica is established as a role model for young women. Strong, independent, and in charge of her body even when her clingy boyfriend (Alex MacNicoll) attempts to influence her. The no-apologies approach is refreshing.

Equally well handled is the inclusion of an LGBTQ character who is not hoisted on a pedestal or disrespected with sophomoric humor or obvious stereotypes. She is given natural and authentic sexuality that is never played to shock or manipulate the viewer. It is with these where Goldenberg and Jennifer Kaytin Robinson screenplay hits on all cylinders.

The comedy and more serious subjects do not blend as well as I would have liked. Some scenes seemed crow-barred in to ramp up the road trip vibe. While enjoyable enough, especially when upending common tropes, they feel forced and often throw off the rhythm, making the 104 runtime drag at times. Richardson and Ferreria’s performances will both make the audience take notice, even when Bailey straddles the line between quirky and annoying. The supporting cast including some recognizable faces including Stephanie Beard (The Flash), Mary McCormick (In Plain Sight), Breckin Meyer (Robot Chicken), and Giancarlo Esposito (Better Call Saul) all have brief yet memorable moments that add some texture to the trip.

The girls’ journey of self-exploration, sexuality, and friendship is often limited to male-centric films. This film probably would not have been made in the same fashion just a decade ago. And while it will certainly upset some viewers (too bad), at the same time, films like this will open the eyes of others. While Unpregnant hits some patches of rough terrain it never gets stuck, making this a unique road trip worth taking.

A unique coming-of-age road trip that is both impulsive and thoughtful.