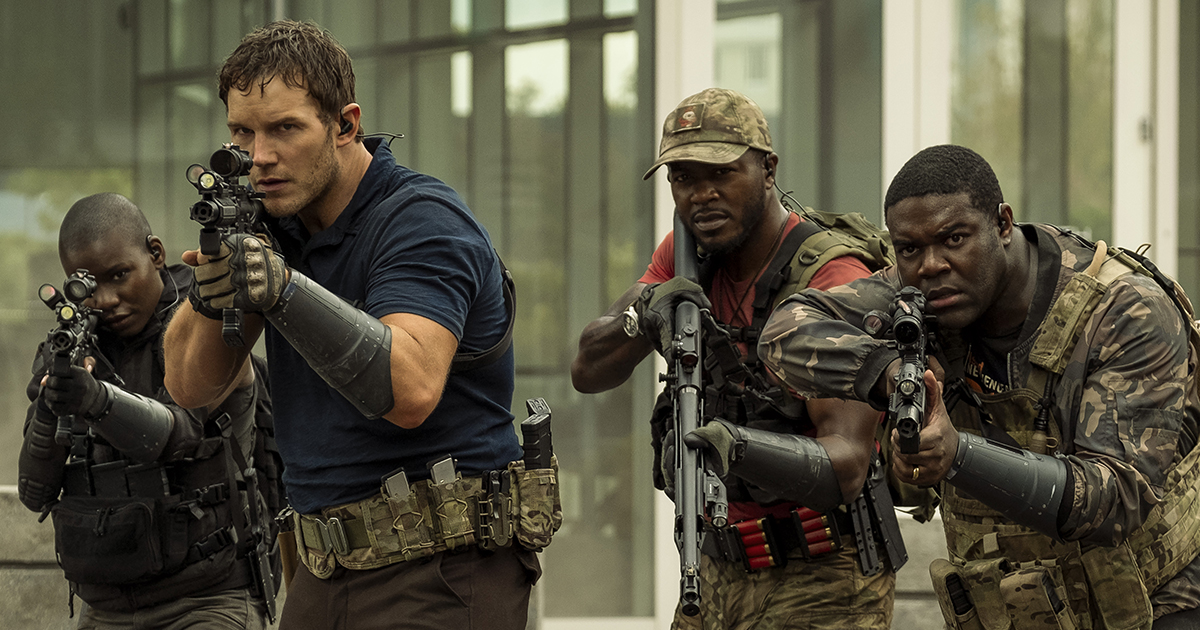 Strap on your assault riffles and pack up your nerves, we’re going in. It is time to save humanity… again. Director Chris McKay (The Lego Batman Movie) helms the new sci-fi action thriller The Tomorrow War airing exclusively on Amazon Prime Video. The film is a total Chris Pratt vehicle and brings with that all the slightly clueless, everyman charms Pratt brings to just about every project, as he helps battle aliens for earth’s future.

If that is not your thing, you should probably walk now and never learn the fate of mankind in this war of average earth citizens against endless waves of viscous monsters. For me, Pratt is like popcorn, even after you think you have had your fill, it is hard not to be drawn in for more. Even after a burnt kernel like Jurassic World: Fallen Kingdom, I was ready for more. While the premise sounds somewhat familiar, what doesn’t these days in the era of endless content? It’s what you do with it that matters. The Tomorrow War delivers the big, noisy, excitement of a summer blockbuster many of us have been craving. And, along with a plenty of wit, topped off with a good dose sentimentality to boot.

This time around in the earth’s-last-stand movie genre, a message about the fate of all mankind is delivered by time travelers from 2051 who interrupt the FIFA World Cup Final – the perfect time to capture a global audience – to warn us of an imminent threat. In the future the earth’s population is decimated to just a small fraction due to a war against a breed of relentless and horrific space aliens that enjoy snacking on human beings like said popcorn.  (You can never each just one, so eat the whole species.) There is one chance to save the human race, send an army of present day people 28-years forward in time in hopes of shifting the balance of the war and saving civilization. With no other options the visitos from the future begin recruiting average civilians to take up the fight.

The film’s scale is ambitious, taking us to numerous settings and situations. Viewers are whisked away across the globe – from family settings to science labs to decimated cities swarming with monsters – back and forth and through time, between the the present and the future. Establishing each setting adds to some pacing issues of the bloated 138 minute running time, but are never too detrimental.

It starts with an extended 40 minute setup where we learn enough about the monsters, the plan, and establish just who our band of misfit soldiers are to care about them. While long, I enjoyed it more than expected, a nice mix of sci-fi mumble jumble and personal moments . As we finally make it to the battlefront, there the tone shifts from semi-serious and “smart” to straight up intense action inside a creepier version of the future that is total hold your breath territory – every step in taut with anticipation of where the next attack will come from. Many sequences are essentially a video game in movie form bringing with it all the best qualities of the medium along with some of the weaknesses. But as it keeps moving along you’ll be too caught up to care.

Because when it is kicked into high gear it is a hell of a lot of fun, especially as these average blokes take on the aliens in an all out assault – ammo versus atrocities. They are terrifying beasts called the White Spikes are the stuff that nightmares are made of – aggressive, smart, strong, spike-shooting, tentacled creatures with fang-filled mouths that snap away in a chilling manner. A cross between the Terror Dogs (i.e. Zuul The Gatekeeper) from Ghostbusters combined with the xenomorph of Alien franchise on steroids mashed up with a few other beasts.

The films ability to create interesting characters helps this rise above some of the forgettable entries in the genre Chris Pratt does exactly what you would hope – a relatable and versatile action hero with enough easy going appeal to spare. He is always fun to watch. The rest of the core platoon consists of several comedians, a move that pays off by with a motley crew of warriors who never feel like the cookie cutter action heroes we are used to. Mary Lynn Rajskuband, Mike Mitchell, Edwin Hodge are a platoon of faces you can root for – no examples of one-dimensional walking bravado here. Plus Zach Dean‘s screenplay is patient, providing time to learn enough about the squad and develop their relationships so we actually care about their impending demise. We are not talking layered, complex characters, but the film is light on the cardboard thin ones. Even while taking on more serious territory the film maintains a levity through most situations that felt natural to me.

Yvonne Strahovski and J.K. Simmons feel right at home in the all the action. Both make the most of the their screen time while at polar opposite sides of the character spectrum. It is Sam Richardson who is the standout, holding most the comedic cards which he plays quite well, even providing a truly poignant moment or two.

People will probably unfairly compare this to Independence Day, The Edge of Tomorrow, and Starship Troopers. It is fresh enough to stand alone. It avoids a lot of the pitfalls of end of the world films plus the performances are just plain enjoyable. While it does run a little long and crams in a lot, I was please with just how much of it worked for me. Mindless action fun to substance ratio hit a good balance mix and is certainly a rewatch-friendly film. In addition, there is a family theme that runs throughout that is surprisingly effective and had the dad in me teetering toward verklempt.

The Tomorrow War thrives off of an imaginative concept, thrilling action and a solid cast. I would not spend too much time examining the science logic for holes though – it does a good enough job for me to buy what it’s selling. Time travel films rarely hold up to such scrutinizing, so poking holes in that aspect of the film is in my opinion is a waste of time. It is better to get lost in the spectacle; the exhilarating sequences placing you between a horde of menacing aliens closing in on one side and incoming missile strike on the other. And the climax, is just the ridiculous fun you can’t look away from. If you let yourself get lost in it, it is pulse racing fun. The film knows it limitations, aims to entertain and connects well enough. While not a game changer, it does provide the ideal amount of fireworks for a holiday weekend in need of some bang.

The Tomorrow War is streaming exclusively on Amazon Prime Video.

The Tomorrow War thrives off of an imaginative concept, thrilling action and a solid cast. It is the definition of summer blockbuster fun – this time, delivered to your living room.