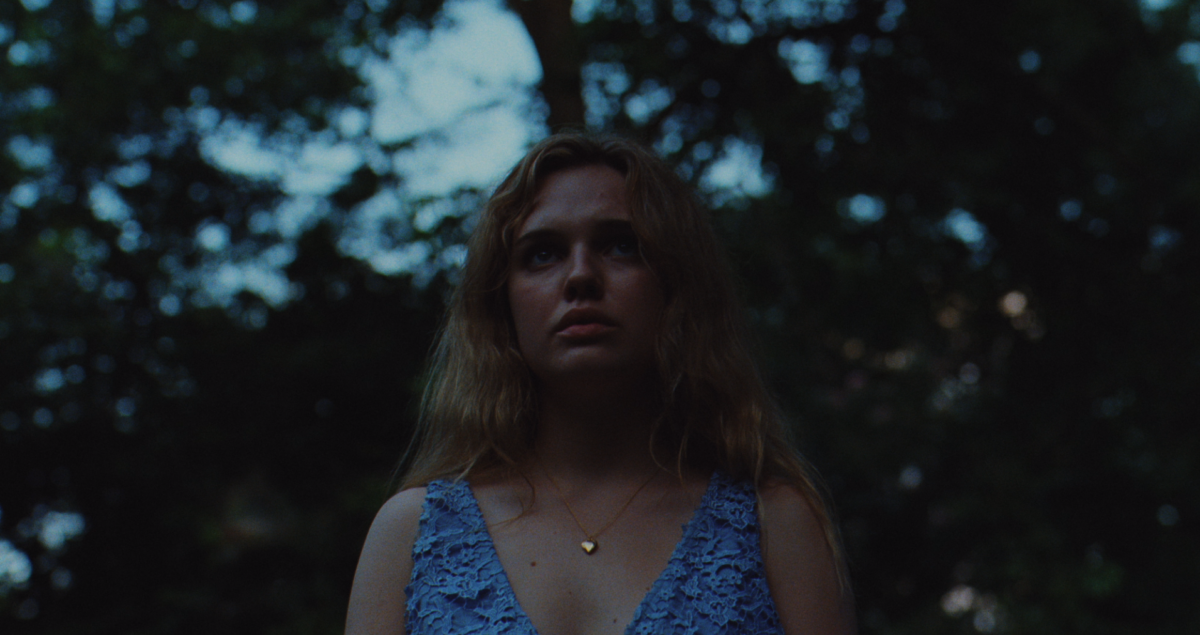 This line, spoken by a high school senior boy, one of the supporting characters to the protagonist Charlotte, is the moment the writer/director David Raboy tips his hand to the audience. The Giant is a quiet, contemplative film with a script that eschews exposition and lets us discover the plot and characters as it unfolds before us, often in a dreamlike trance.

Set in small-town, rural Georgia, we follow Charlotte (played by the dour Odessa Young), during her summer after high school graduation as a series of mysterious murders shakes the small town.  Coincidently, it occurs on the same night of Charlotte’s ex-boyfriend’s sudden return. Don’t be fooled by the trailers, there are no supernatural elements; this is a coming-of-age thriller told through the eyes of a depressed teenager whose mother’s suicide is revealed in the first few minutes of the film. Are we witnessing it firsthand or is it a memory? The director never answers that question, which is smart. Instead, he uses the techniques of cinema to blend memory and reality into haunting, ethereal sequences.

I have a soft spot for rural thrillers; the idea that the darkest secrets of the human soul are concealed in the forest, the swamps, down the dirt roads, and inside the decaying houses and the beating hearts of the dwellers in these isolated, depressed communities. Predecessors like Winter’s Bone, Undertow & Deliverance have explored this terrain but The Giant forges its own path. Actually, meanders, sways, and floats would be more accurate than “forges.” As his feature debut, Raboy seems inspired by Terence Mallick or Larry Fessenden, choosing mood & atmosphere over plot.

He leans heavily on voice-over and sound design to communicate the characters’ emotions and thoughts. While it may not be a crowd-pleaser – it borders on pretentious at times – it is ultimately saved by the subdued, realistic performances, and the wonderful visuals. The color grade looks like 16mm Vision 200-T stock I shot within the college, along with light leaks and double exposure that was used (and abused) by us striving film students. Cinematographer Eric Yue does a phenomenal job capturing the rural experience; fireworks at an empty football stadium, neon-lit gas stations at night, the moon obscured by clouds and tree branches from a moving car, skinny dipping in a dark lake illuminated by car headlights. The world of The Giant is both familiar and foreboding.

The editing (also by Raboy) is sharp, contemporary, and purposely disjointed, jumping quickly through scenes to give us a taste of the town and its inhabitants. He knows when to linger and dwell on a scene for mood and suspense; details like fingers crunching a straw wrapper and dried blood crusted on a polo shirt that Charlotte witnesses as she casually chats with friends at a dingy gas station. There is an oppressive sense of dread that sits on the viewer, reminiscent of It Follows, that had me check to see if A24 distributed the movie.

The Giant fails to gather momentum for the final act. The style holds up for the first hour but begins to drag. Even as open-ended as the finale seems, The Giant feels like a cohesive whole. It’s a film about young love made impossible by naïveté and circumstance, the brutality of life, and the pain we give and take, all told through poetry. Those seeking definitive answers to a “whodunnit” will feel disappointed.

Those seeking thrills and scares will be let down. Those wishing to contemplate the greater mysteries of life will be inspired. I hope Raboy gets another shot at a feature and maybe will team up with a scriptwriter to make his work a little more accessible to the average audience. He will be one to watch.

The Giant is a quiet and contemplative coming-of-age thriller set in rural Georgia that is heavy on atmosphere and eschews a traditional “whodunit” plot for a more dreamlike and open-ended exploration of trauma and loss.