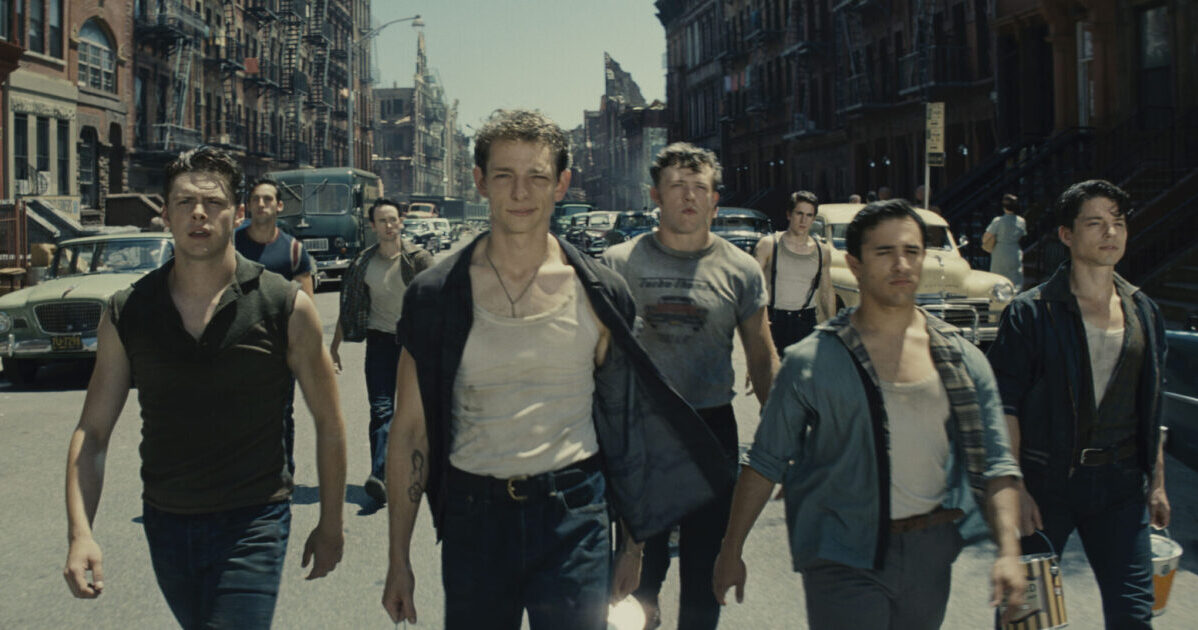 They are two opposing ways to view Steven Spielberg’s West Side Story. The first is as an ambitious, standalone musical full of vibrant visuals, lively songs and strong performances directed by a film icon. The other, very valid perspective, is to compare it against the beloved, 10-Academy-award-winning 1961 original film. It is universally considered a classic film, if not a masterpiece. Separating the two seems like a disservice to both – while comparing them does too.

Spielberg delivers a glorious take on the film. But then again, did you expect anything else from one of our best directors paired up with that source material? The original, for the most part, has aged well. Of course, there is the casting of white actors to play POC while wearing brown face, and hearing them deliver some of the lyrics/dialogue, especially those regarding race, often delivered in stereotypical accents is a bit cringeworthy to say the least. Still, Stephen Sondheim lyrics often feel as timely as ever. Which probably explains why Spielberg had taken it on in the first place.

The story, for those not familiar, is a take on the Shakespeare tale of forbidden love, Romeo and Juliet. But this time, instead of feuding families it is a pair of warring gangs. The Jets are composed of young, tough white guys whose family immigrated to the US long before.  The Sharks are Puerto Rican young men who are newer arrivals to this country. They each feel they have the right to the upper west side neighborhood. They constantly battle over the territory, sometimes with words, sometimes with fists and sometimes with dance – all the while the neighborhood quickly shrinks around them as gentrification sets in. The area is literally being torn down around them to make way for the Lincoln Center (where I was lucky enough to watch the film).

In the middle of it all are two new lovers Maria (Rachel Zegler) and Tony (Ansel Elgort) whose hearts lead them to ignore the enemy lines. This is much to the chagrin of Maria’s brother (the leader of the Sharks) Bernardo (David Alvarez) and Riff (Mike Faist), Tony’s best friend who took over the Jets after Tony’s prison stint returned him a new man.

From the opening moments, the look of Spielberg’s West Side Story is a showcase of technical perfection. The cinematography is gorgeous while never feeling pretentious. Janusz Kamiński uses his angles to perfection, taking us several stories above the streets of New York, into the alleys, and right into the middle of lively song and dances. The color palette is balanced; muted hues at times contrasted with the popping colors that electrify the screen during jaunty dance scenes that are reminiscent of the look of the Technicolor of the era.

If I did not know any better I’d swear this was shot in the 1960s. The attention to detail in the production design is amazingly thorough and never feels anything less than authentic. The sets lack an ounce of dressed-up to play feel. During a recent press conference Spielberg explained just how far they went, building a five block stage and digitally removing the AC, window bars, and other modern artifacts for scenes shot on-location shoot. The costumes are just outstanding. Expect a long list of below the line nominations.

For a story as old and set as far as it is, Spielberg definitely adds the urgency of the now, the perfect hybrid of loyalty to the original and a slight increased shift in focus to the social-political issues of the day. The director has been at this for quite a while yet what he delivers feels inspired. Spielberg’s first directed musical certainly should not be his last.

The story hinges on the effectiveness of the performances. All the technical prowess is worthless if we are not invested in the characters. Again, Spielberg’s instincts are fine tuned – with the casting of relative newcomer Zegler as Maria he hits a bullseye. She is a revelation. Both her powerful singing and emotional acting deliver such a mix of heart, innocence and sincerity, you’d think she was a veteran.The textbook definition of a Hollywood success story – from open casting call to a very likely Oscar nomination. Just wow!

Zegler and Elgort’s chemistry works well, leaning heavier on her work than his inconsistent performance. The rest of the cast also delivers. Other standouts include, the tough and cocky Riff (a new face to me, Mike Faist) is pitch perfect in the role in a performance that feels like it was torn from the celluloid of classic films while still providing plenty of emotional gravitas to what could be a paper thin role. Perhaps my favorite performance in the film. Rita Moreno reinforces yet again why she’s an EGOT with tremendous staying power. Ariana DeBose is a powerhouse as Bernardo’s (David Alvarez) girlfriend, Anita (the role originally played by Moreno). She leaves her mark all over the film from her superior dance steps to the belting of tunes with power and emotion.

Speaking of which the music it more than holds up, it is as timeless as ever. The classic score of Leonard Bernstein is treated with reverence by a team including composer David Newman, conductor Gustavo Dudamel with an assist by longtime Spielberg collaborator John Williams.
The musical performances are stunning and brought to incredible life with the choreography of Justin Peck. It is nothing short of breathtaking at times as he hits beats from the original while taking a fresh approach with every dance scene.

‘America’ is the showstopper that takes us right one the streets of the city, led by an exuberant DeBose in one of her film highlights. ‘Mambo’ is a choreography dream; classic big Hollywood infused with some modern flare. No one will walk away disappointed by the musical numbers.

Does Spielberg bring enough new to the film to justify a remake. While he does not take any big swings the ones he takes connect. There is a grittier, slightly more realistic feel to the film – even as the musical numbers are soaring it does not feel like we are encased in the world of a musical. This lets some of the emotional moments land better while giving the violence bigger stakes.

The themes covered also have a more contemporary feel with characters and situations being handled in a fashion to retain the spirit of the original while putting another foot planted in the world of today. The decision to not have subtitles for the Spanish spoken parts is a choice I understand, but am really on the fence about. Yes, I could read their emotions, but at the same time I felt I was missing out on the nuances of some key moments. In a way, it backfires and prevents the characters from being heard with the depth they could have – their words stripped away.

(Update 2/20/2022 : I have since watched the film again and my stance has not only softened, it has changed. I was explaining to my daughters who could not translate the words and asked why there were no subtitles. I asked them what they were saying – not the words, but what was going on. They had already figured it out. It is what the real world is like. If we listen to each other, even if we do not speak the same language we almost always find a way to communicate. I would still like to understand word for word what was being said. But I now fully support Spielberg’s decision.)

There’s a lot to love about the film. As a standalone it’s quite impressive, even magical at times. Certainly his skillset and access to a near endless budget contributed to this As a remake, it certainly respects the source material to the highest degree and never tries to reinvent it.  Is it necessary? No. Is it welcome? Yes! Besides the minor quibbles Spielberg and company deliver a worthy remake of a classic. One of the few that will stand the test of time.

Classic film lovers can feel secure that the original was not disrespected and will most likely fall for Spielberg’s work as well. Newcomers to the story will now have a version that speaks more directly to a modern audience, while never losing sight of where it came from.

There’s a lot to love about Spielberg’s impressive, even magical at times, remake. It certainly respects the source material to the highest degree and never tries to reinvent it. You’ll be singing the songs for days.