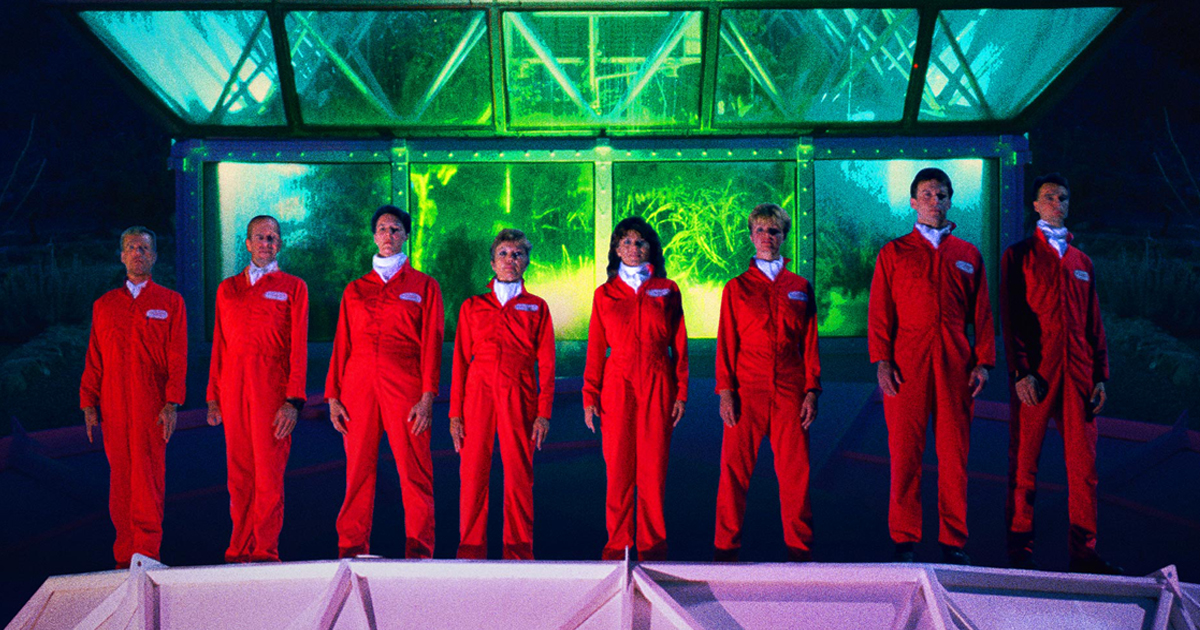 People locked in their environment unable to venture into the outside world, dealing with deteriorating relationships, limited food, forced to live off their own resourcefulness. Sound familiar? No, it is not your family story during these COVID-19 times. This is the setting of Spaceship Earth, the new Neon documentary that takes us back in time to the 1990s, where Biosphere-2, a massive science experiment sealed off eight human guinea pigs away from the world for two straight years.

Those hoping to spend two hours inside the airtight eco-dome may be put off by director Matt Wolf‘s meandering approach. The wider scope tells a much bigger story. Rather than diving right into the heart of the project, the documentary begins with background on John Allen, the engineer whose out-there ideas gained him reputations ranging from genius, madman, visionary, cult-leader, to a conman. It is tough to determine where the needle actually falls on that meter and Wolf does not lead viewers to any one conclusion.

The story starts on a trek through the admirable accomplishments, each one more unorthodox and impressive than the previous or Allen. One of the most admirable was his ability to attract incredibly devoted followers (who many have compared to a cult) that helped him carry out his ambitious initiatives. It is both incredible and a bit little scary how much this group of random people with a shared mindset, if an idea can be dreamt up it can be built, could accomplish. What started as a theatre troop tackled projects spanning the globe. Farms on several continents, erecting a hotel, and a 30-foot ship that they used to sail around the world were just a few of their ventures. The pinnacle of their feats, the $200 million Biosphere-2.

The experiment feels like the offspring of equal parts NASA space mission and Disney World space ride, complete with cheesy spaceman bodysuits and embroidered patches. The massive mix of steel tubing and high-performance glass created an airtight environment uninfluenced by the surrounding conditions. The goal was to simulate a man-made, self-sustaining atmosphere that could eventually be used to colonize other planets, as earth (Biosphere-1) continued on a path of self-destruction because of the actions of humanity.

There are some strong biblical metaphors, the perfection and desecration of the Garden of Eden combined with a Noah’s Ark as the scientists handpicked the plants and animals that would share their new home. Once we reach this point is captivating which is why it is one of the many places where the film would benefit from more insight. We get a hint of the science behind the building and filling the dome, not the detailed exposition science nuts may desire.

Instead, screen time is shared with the eight eccentric scientists, labeled the Biospherians. The group of earth-loving hippies take their goal of saving the planet and humanity into their own hands. The eccentric (some might say oddball) crew of followers are the blood flowing through the veins of this stranger-than-fiction non-fiction tale. We are introduced to them one at a time with a combination of both historic footage and modern interviews. It can be seen that decades after the experiment their passion for the project has not faded a bit, describing the events with a wild-eyed enthusiasm that dismisses claims that this was all a publicity stunt.

Their day to day life in the dome consists of growing and making their own food, maintaining the habitat, and finding a way to coincide. It was the latter that served as the biggest challenge. The combination of quirky personalities, a lack of nourishment, and rising carbon dioxide levels, one of the biggest challenges of living in the sealed environment, lead to moods shifting from enthusiastic to agitated. The group didn’t see it as locking themselves up but rather locking the world out, which became more difficult than anticipated. The glass exterior transformed the experiment into a tourist attraction – a human zoo with the Biospherians being the observed species.

Shown through numerous archival new footage clips, we see how the media had a heyday with it all. First building up the experiment with excessive press coverage by everyone from Peter Jennings and Katie Couric to Golden Girls’ star, Rue McClanahan, then tearing it down as the public’s attitude became more skeptical. The clips provide a glimpse back at the era showing the contrast between then and now, the responses of both the media and the public – the hairstyles, clothing, and general way people carried themselves on camera. These days such an event would barely be a blip on the radar as everyone has turned their lives into broadcast internet television, but back in the ’80s/’90s, this was a big deal.

The documentary delves deeper into the experiment telling tales of billionaires, betrayals, deception, and power struggles all revolving around a theater group with big ambitions. It has all the makings of a mockumentary, and is often truly “science fiction without the fiction.” Still, the lessons learned remain relevant today, especially as the world deals with a uniform threat forcing us to distance ourselves from the outside world.

There is so much to explore here that will intrigue viewers – the social aspect, the science, the effects of big money on the integrity of the experiment, and the dome itself to name a few. Those who were oblivious to it all (like me) should enjoy the intro to this bizarre piece of history. Much more is covered, which I purposely avoided revealing to retain the viewing experience. While those familiar with the project may find the documentary to be more of an overview than the deep dive they anticipated.

Some of the most intriguing elements are skimmed over, namely, the actual time spent prepping and living within the dome. It is all fascinating, yet it feels like a missed opportunity to explore it all closer in a long-form. The subject would perhaps be better served as a series with its own podcast after-show to expand upon it even further. I would specifically request one episode titled, “Rue McClanahan??” As we continue our isolation “Spaceship Earth” joins us, skipping a wide theater release and available for all to stream exclusively on Hulu.

The ambitious doc is captivating even though it tries too hard to cram a planet’s worth of stories into one film.