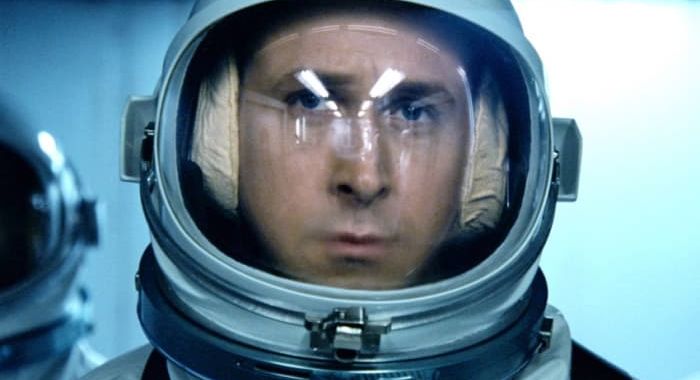 Writing a screenplay for a true story might be one of the hardest jobs in the film industry. How do you tell a compelling story when we’ve all known how it ends since 1969? The creative team responsible for First Man, has certainly managed a perfect landing.

Hard to write a spoiler-free review when the ending, and many of the events in the film are well-documented, but I’ll do my best. Neil Armstrong is one of modern America’s greatest heroes. All of the astronauts in the Gemini and Apollo programs, probably belong on that list, but Armstrong is right up at the top, and First Man is his story. Certainly, it is a story about one of America’s greatest achievements, but this story is told through Neil Armstrong’s lens, so much so that we often see the actual story unfolding through his eyes.

From the opening sequence, this movie takes off fast and hard, showcasing Armstrong as test pilot in his early days with NASA. Nerve-wracking from the very first frame, First Man sets a tone that is exciting and suspenseful…about an event that we know the ending of. Have I mentioned that yet?

This was an ambitious project and director Damien Chazelle was able to deliver a film that was never a boring or predictable retelling of an event we already know. With a rock solid pair of leading actors and some bold decisions, he delivered a movie that could easily take its place on the list of classics.

The Cast
This film is just another example of Ryan Gosling’s ability to shine. A hugely underrated actor, I never see a film advertised and say “Oh look, Ryan Gosling is in it, I should go see it”. That ends now. Gosling is an actor that makes his money bringing characters to life, not just being himself playing some character. His Neil Armstrong was astonishing in its depth and in how much it was nothing like Ryan Gosling, nor any other part he’s played recently. Armstrong was a deeply complicated man whose many layers often conflicted. He was so serious at times and at others he injected dry bits of humor. His vulnerabilities conflicted with the astonishing courage it took to be a pioneer in space exploration. Gosling captured those layers spectacularly. I never once saw Ryan Gosling on the screen. It was Neil Armstrong throughout.

Claire Foy, the British actress best known for playing Queen Elizabeth II in The Crown, also brought incredible depth to the character of Armstrong’s wife, Janet. A woman who had to be strong in the face of her husband’s job, but behind closed doors, we could see the anxiety grow with her husband’s career, and with the grisly deaths of their good friends. How difficult must it have been to keep up the facade of courage while comforting her friends who were widowed by America’s space program?

The Story
Nothing much to tell here that you don’t already know. Test pilot, Neil Armstrong goes on to become astronaut Neil Armstrong and then the first man in history to step on the moon. But this movie was more than that. As I said above, it explored the complexities of the man who ranks high on the list of real American heroes. It explores the relationship between a man and woman when it is not at all based on the realities that most people face daily. It is a relationship that starts with personal tragedy and then is completely enveloped in ever-present, ambient fear because of a ludicrously dangerous public profession. There are moments where Armstrong faces the dangers, mostly with a look of uncertainty on his face. He wasn’t the overly confident, laugh at fear kind of guy. There are also moments where the anxiety gets to both of them.

The ending of this movie is arguably one of the most powerful moments I’ve seen on film in a long time. Brilliantly directed, and exquisitely acted, the final 30 or so seconds of First Man took my breath away. It was a perfect ending to a film that had me on the edge of my seat for most of the last half hour. It also drove home the message about what this film was really about. To most, the climax of this film happened when the LEM touched down on the lunar surface, but this film was also about Armstrong’s personal life, and the stresses his job imbued on his relationships, with his first wife, and with his two sons, Rick and Mark, who, by the way, have gone on record as approving of the treatment that First Man gives their father.

The Production
For me, regardless of the level of the acting or direction, a film cannot blow me over without good production values. There is a sort of comical juxtaposition in the fact that NASA was the cutting edge of technology in the 1960s, and yet the design of the buildings and equipment was so spartan, nothing like the high tech centers of today. Production designer Nathan Crowley did a remarkable job of the callback in both the professional and the personal settings of Armstrong’s universe.

If I had one real complaint about the film it was the choice made for the camera work. Armstrong was an egghead, an engineer who took in information constantly and analyzed it carefully. Often the cameras actually became his eyes, moving quickly over remarkably well-crafted reproductions of control panels in deliberately out of focus shots that made it hard to watch. When Armstrong was flying, alone in his test pilot days, or with other astronauts on his Gemini and Apollo missions, the cameras shook uncontrollably, for long periods of time, to simulate the forces at work on his flying machines. It was also hard to watch for the lengths of time that the technique was used. The other cinematography decisions were outstanding, from a toned-down color palette to make it look more like the film of the day, to framing that emphasized the gravity of some of Neil Armstrong’s decisions.

One of the unsung, and major heroes in this film was the sound effects. Not just the score by Justin Hurwitz, which was near perfect for adding to the film’s many different moods. Every single time a spacecraft was flying the creaks and groans in the background made it seem as if the ship could be torn to pieces at any moment. The roar of the rocket engines in the background was deafening, and this was the way to add suspense to a tale we all already knew. It was incredible. At all the right times I found myself riddled with the same anxiety that Armstrong and his fellow astronauts must have been feeling.

Maybe I am just a sucker for historical films about America’s space program. I loved Hidden Figures just as much as I loved First Man, for many of the same reasons, and while it was before my time as a reviewer, Apollo 13 is one of my favorite films of all time. The number of pieces that had to go together just right in order for us to reach the moon was astonishing. In this film, all of the pieces fit together just right, as well. Epic acting and direction, exquisite production design and brilliant sound effects all carried the day to make a film worth seeing about a man worth knowing.

– Shaky camera techniques were sometimes long and hard to watch.

Pete Herr is a contributor and coal shoveler over at The Geekiverse.com. He is the author of “10 Things We Should Teach You In High School (and Usually Don’t),“ and loves reading sci-fi/fantasy, comic book movies and Star Trek.