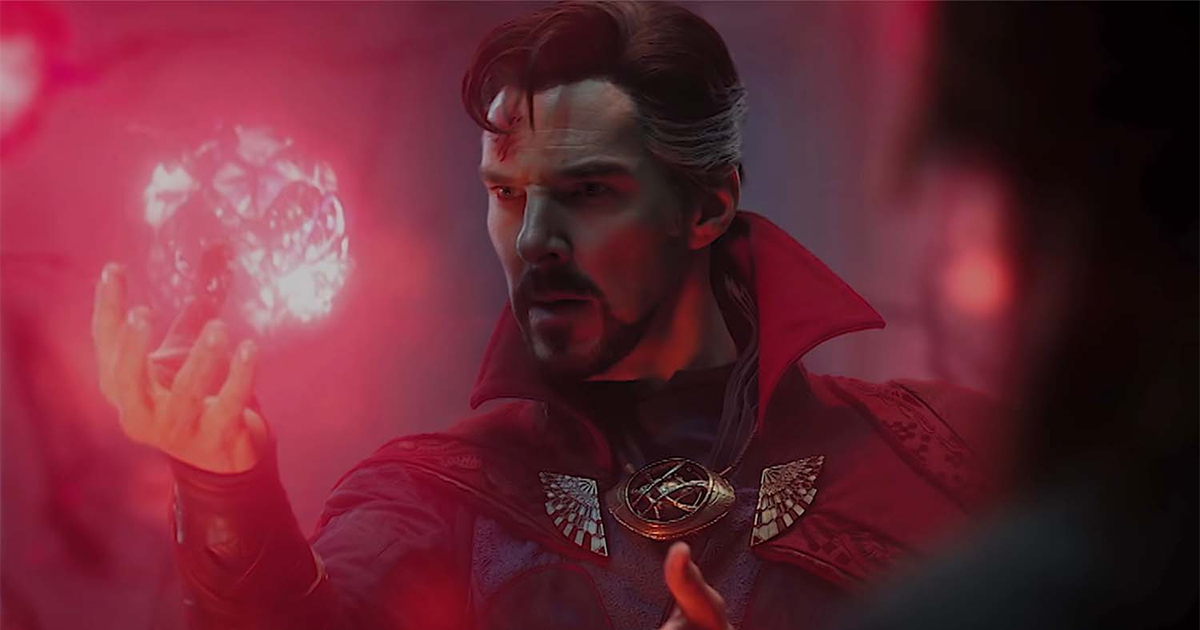 Marvel’s multiverse has been more difficult to navigate than expected. Maybe that should be anticipated for a storyline with seemingly endless possibilities. Even with that in mind, the nature of the multiverse films feels a bit more unwieldy and undefined in the grand MCU scheme. Part of this is by definition of the multiverse itself,  a collection of alternate universes with infinite paths to infinite dimensions and parallel worlds. In comparison, the once considered sprawling Infinity Saga feels much more compact, structured and focused, especially when you consider that the majority of it takes place in just one of those infinite paths.

Containing this giant swirling helix is one of the challenges of storytelling in the post-Blip MCU world. With Loki, Spider-Man: No Way Home, Wandavision, What If… and other Marvel content exploring the concept it is obvious the multiverse is not going away any time soon. But I, for one, am still trying to grasp where it is all going. For Doctor Strange In the Multiverse of Madness Marvel put to task in the hands of legendary director Director Sam Raimi (Drag Me To Hell, Evil Dead) and writer Michael Waldron (Rick and Morty, Loki).  Can they wrangle in the multiverse before it spins out of control? The end results are mixed results. While entertaining throughout, the film is also a relentless and at times overwhelming swirl of time-bending and mind-warping madness, that keeps expanding its scope when a smaller film approach may have served it better.

The film opens with a big, fast paced action sequence that has MCU newcomer, America Chavez (Xochitl Gomez), battling a massive shapeshifting beast in a gravity defying series of portal flinging acrobatics. America alone has the ability to open portals that allow her to travel between alternate universes. There’s a hitch that comes with this much sought after power, she does not know how to control it. The only thing that triggers her portals is to be scared. Dr. Strange (Benedict Cumberbatch) is there helping her in the battle, making tough decisions that put America’s wellbeing at risk. But don’t worry it is all a dream, or is it? 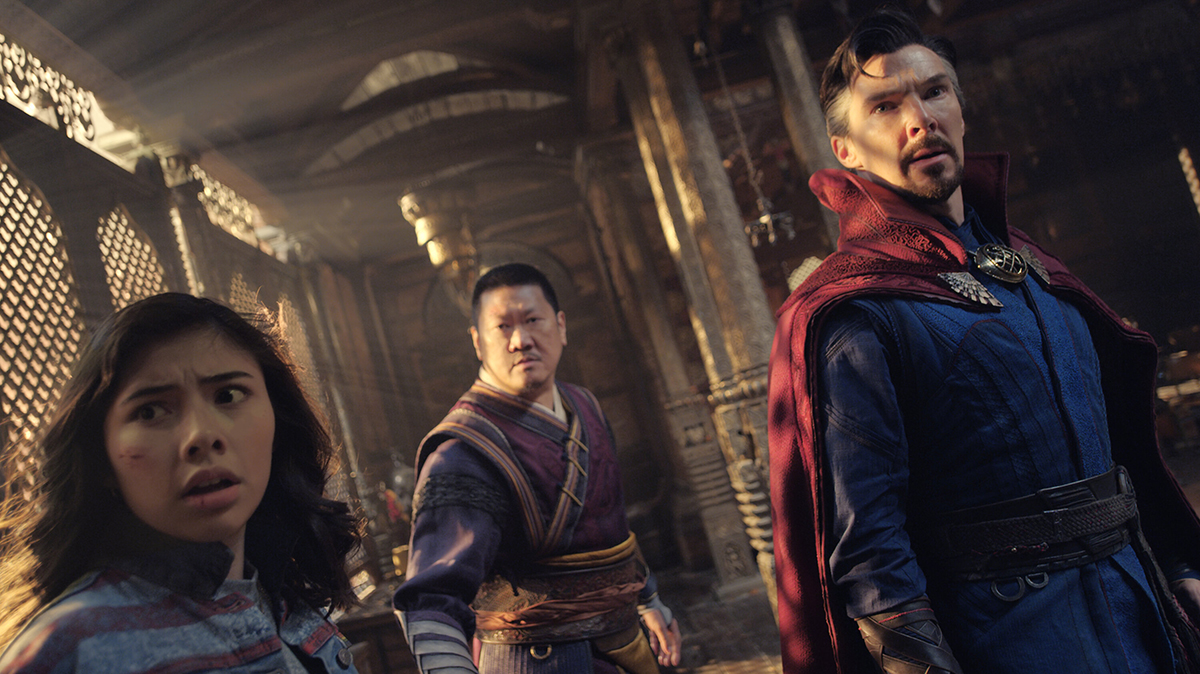 After another attack, this one taking place right outside the wedding of Dr. Christine Palmer (Rachel McAdams), Strange’s love interest and former surgery partner. The pair realize that the reason she is under attack is her multiverse traveling superpower and head to Sorcerer Supreme Wong (Benedict Wong) for help. (He was last seen karaoke-ing it up with Shang-Chi (Simu Liu) and Katy (Awkwafina) in the best MCU post credit scene ever). Eventually leading them to the still damaged post-Wandavision Wanda Maximoff aka The Scarlet Witch (Elizabeth Olsen) leading to more trouble than help.

What unfolds is a time bending, sprawling quest that reaches across universes in search of a way to stop a threat that puts the entire multiverse in danger. The time and space traveling portals are one of the best things about Doctor Strange’s character. They led to an all-time favorite moment in all the MCU during Endgame. In Multiverse of Madness Strange’s portals combined with America’s universe traveling portals are still interesting but ultimately a bit indulgent – a case of less is more. Combined with copious amounts of exposition and CGI, while interesting, they both strangle some of the pathos out the film.

Sure it is all cool, but the layers and layers of multiverse overload had me craving the smaller more human stories that make these universes worth saving. I may be in the minority here, but this is where the film’s strength could lay. Unfortunately the heart of the film is cluttered with and excess of visually impressive style that comes at you at breakneck speed, having me searching for a moment to catch your breath and comprehend the stakes at hand. Again, I was entertained while feeling a certain amount of disconnect from the characters at times.

Luckily the film taps into something fresh for Marvel, an element of horror you would expect when director Sam Raimi is at the helm. It is not the same level of over-the-top violence as seen in his most popular films, but for a Marvel film it definitely elevated horror – no not THAT elevated horror. The film crosses genres well. At my screening there were a few screams, plenty of gasps and the occasional covered eyes. Raimi’s approach is bold – just what the Doctor ordered – a fresh breath in a universe that has become predictable over time. Still this is Raimi at 70 to 80% – the Disney cuffs are on preventing him from making this a bloody mess many of us would have liked seeing.

Cinematographer John Mathieson captures Raimi’s trademark energetic camera work with plenty of funky angles, swooping closeups and first person POV shots ramping to the manic tone of the second half of the film. This was dark, but could have been so much darker. Danny Elfman’s bewitching score adds to the devilish fun. As is, it still may be a little much for the kids used to more cartoonish violence.

As you can probably tell, I am doing my best to avoid any spoilers so much of the film is off limits, at least in my film criticism universe. Being a Marvel film you can expect plenty of surprises coming your way. If you have avoided press, twitter, or trailers up to this point, I recommend you do so because I never knew a surprise, big or small, that benefitted being spoiled by an overzealous fanboy craving likes on their posts. I did avoid everything (including the trailers) and had a lot of fun because of it with a few unexpected moments thrown my way, even when they felt unnecessary add-ons. In the end, they may just be lost in translation for newer viewers or by those looking for a more competent standalone film.

Madness jumps right in with characters we are familiar with already; Christine, Wong, Wanda and Strange need no introduction. Cumberbatch and Olsen are both at the top of their games, delivering faceted performances, part of the advantage of the multiverse. The newest addition, America Chavez, played by Xochitl Gomez is another standout with a lot of spunk. Looking forward to more of her in upcoming entries. Even with the strong performances here, it made me think of the other multiverse film out there right now, Everything Everywhere All At Once. That film had me in tears while Madness did not not strike the same emotional blows – even as it tries to. The difference is EEAAO (while packed full of creativity) is lean, with each element adding to the overall impact. Madness is packed too much excess, not enough character. Think of it like a kids meal, the add-on toys are fun, but they do not make the meal any better. Still, many fans will feel just the opposite, savoring the same things I put in question.

Through my criticism and nitpicking, I did sit through the film with a grin on my face the entire time. Madness is your standard Marvel fare possessed by the ominous Raimi attitude that I ate right up. MCU fan will have a grand time as ever. This is blockbuster filmmaking with all the bells and whistles. In my opinion, it exposed that MCU’s biggest strength is also its achilles heel;  the massive connected universe of characters and stories. It is almost required at this point to connect every film to the grand scheme of things, while doing so they forgo some creative choices and dilute the impact the smaller stories can have. True storytelling gets blurred by the need to serve the bigger picture.The weight of the universe is on each film’s shoulders and it is a lot to carry. Casting it aside would probably lead to incredible, in another level, Marvel films (Moon Knight the Disney+ series seems to have done quite well as a standalone.) Maybe in an alternate version of this reality the smaller, more self-contained version of this film exists – I can only dream. Until then enjoy the Madness.

(Side note: It would have been incredible if Michelle Yeoh appeared in one of the multiverses, a wink to Everything Everywhere All At Once.)

‘Doctor Strange In The Multiverse of Madness’ is standard Marvel fare possessed by the ominous attitude and style of Sam Raimi. It is a wild and relentless ride where style holds the wheel as substance takes a back seat.