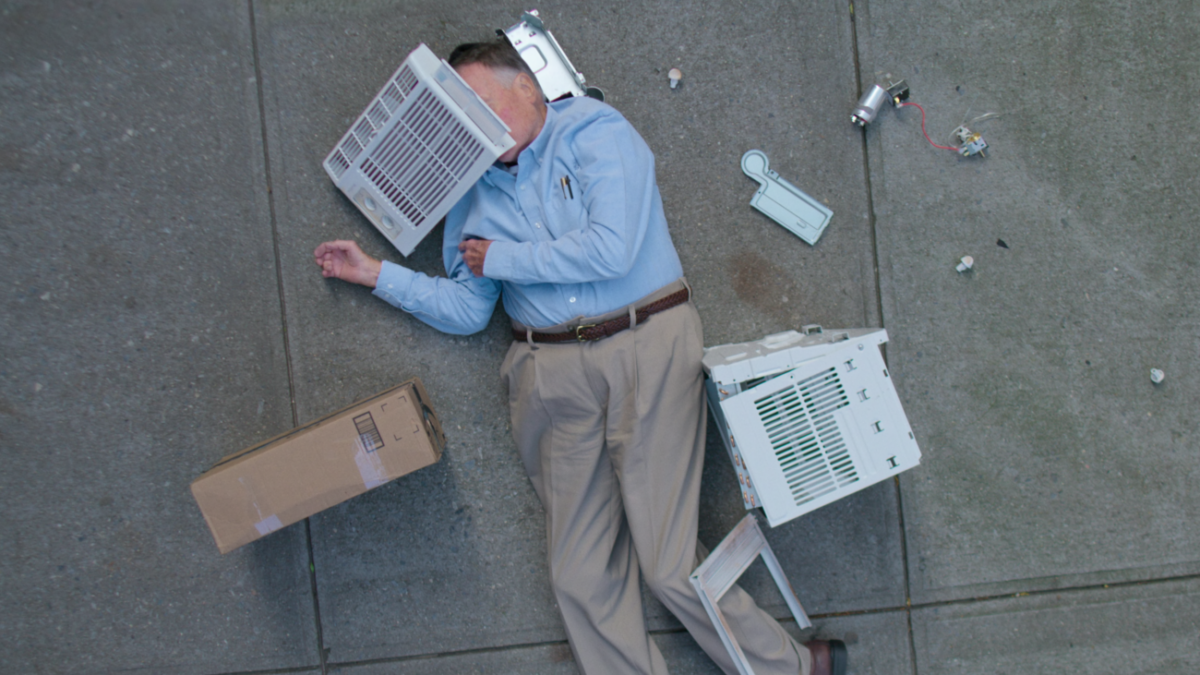 Meet Richard C. Johnson aka Dick Johnson. He is an 80-something psychiatrist and widower who also happens to be the father of the film’s director, Kirsten Johnson (Cameraperson). Dick Johnson is Dead, again and again, and again and it is wonderful. I’ll explain later.

The documentarian loves her father dearly there is no way to deny. It is also why she wants to kill him. Knowing that he is getting up there in years, and the “beginning of his disappearance” is upon them, she decided to capture the closing years of his life of her father’s existence. “He’s a psychiatrist. I’m a camera person. I suggested we make a movie about him dying, He said yes.”

When we meet Dick we find a sweet, older man with kind eyes, a charming smile, and an infectious laugh that he generously graces us with throughout the film. In the nicest of ways, there is nothing particularly important or interesting about the man. So what is it that makes the man so important, worthy of his own documentary? The answer unfolds in a mosaic of vignettes that reveal there is more urgency at hand.

As many of us do, Kirsten struggles with regret. This is evident in her voice as she records the film’s narration into her while seated in her Manhattan apartment closet surrounded by hanging garments. She tells us how she lost her mother to dementia and heart-wrenchingly confesses that after 30 years of documentary film work, “I don’t have a single frame of the warm and brilliant person she once was.” It is a mistake she will not make twice because she has learned her father has dementia and is starting to slip away before her eyes. The next hour and a half is a bizarre but balanced mix of documentary, comedy, cinematic therapy.

Let me set this straight, the film can certainly sound like a downer. And while any film that tackles such a difficult subject can be, this film rarely lingers in the lows. Actually, it hovers above that to become a rather upbeat, peculiar, and beautiful celebration of the man and of the moments we share that make us human. Johnson works through her feeling about her father’s impending demise on-screen and in the oddest of ways, by killing him. She takes on the delicate subject with a sledgehammer, staging several fictional enactments of her father’s deaths that range from taking a spill down the stairs to being crushed by a falling air conditioner. As outrageous as they are each death lets us see learn about this man that she respects while helping her to prepare herself and him for his own loss.

While it may sound morbid, the deaths are mostly played for laughs. To soften the blow of watching an 80-something-year-old man die repeatedly, the death scenes are followed with something special. Johnson explains in her voice-over how her dad, “had a way of living in the moment. ‘I have my heaven right here on earth with all of you.” She takes it a step further creating surreal, dreamlike interludes that transport us to her father’s newfound afterlife.

Shot in heavenly (literally) slow-motion the sequences are a visual delight, stuffed full of fluffy clouds, glimmering sequins, angelic jazz musicians, surrounding Dick with pop-cultural and historical figures. Jesus even makes a cameo, restoring her father’s deformed toes (a source of great embarrassment and pain for him) and allowing him the opportunity to dance with his beloved, deceased wife (while barefoot) one more time. These fantasies are a splendor to watch as they celebrate who he is and was, capturing moments as only film can. A cinematic monument for and to the man himself.

It does not take long before anyone who watched a loved one decline with feel like an active participant rather than a viewer. Johnson brings us into her family, showing us both the deeply personal and the mundane moments letting them unfold in a deliberate yet natural way. One of the most effective moments comes early and seems harmless at first. Her dad is simply unable to recall how many years since it had been since he had his heart attack. It is never addressed in the voice-over. It is just left sitting there to be dissected by the viewer. Did we just witness a simple mathematical error or was it something more profound, the beginning of his mental decline? Even though I was just meeting this man on screen, this moment sent me in denial. All the signs are there, but I did not want to accept it. Anyone who has had that realization in their life will quickly identify. The approach here is subtle but devastating.

For all the ambitious elements she puts on screen, it is the quiet moments that are often most effective. The camera is used as a silent observer – never interrupting as it cast its gaze at her father – often leaving us in the room with him to take in his presence. A short car ride takes on more meaning when you focus on her father’s eyes as he watches the passing environment – a sense of the loss and a touch of being lost in your own world. The simplest of moments, from playing with his grandchildren to eating chocolate cake to a nap on the couch is captured in adoration by Johnson’s lens.

Her voice-over only amplifies the feeling while we watch this portrait of a man whose life touched many and is now fading. Even if the higher concept aspects of the film are not your thing – sitting and “visiting” with Dick Johnson is worth the watch alone. He is just such a sweet guy.  As simple as that.

As I sat down to write this review, something unexpected happened that I do not recall ever happening before. I cried… several times. While gathering my thoughts, the concept of human fragility gripped me. Reminders of my dear mother’s decline and her untimely death due to complications from Multiple Sclerosis would not be held back. Watching the relationship with a loved one slowly dissolve because their body has betrayed is not an easy watch, especially for those who lived through it before.

Dick Johnson Is Dead will relieve you of some of those pesky tears, a display of cinematic catharsis at its best. It is a triumphant exploration of life, love, loss (in all its forms), and humanity. A touching, much-needed reminder to celebrate life and take it all in while it is there to be experienced.

When the credits roll, expect to have a newfound need to call a loved one… just because. Go ahead, stop reading this amazing review (your words, not mine) and do it. The clock is always ticking away. Appreciate each and every tick.

This documentary blends the most unlikely of emotions to deliver something quite special.