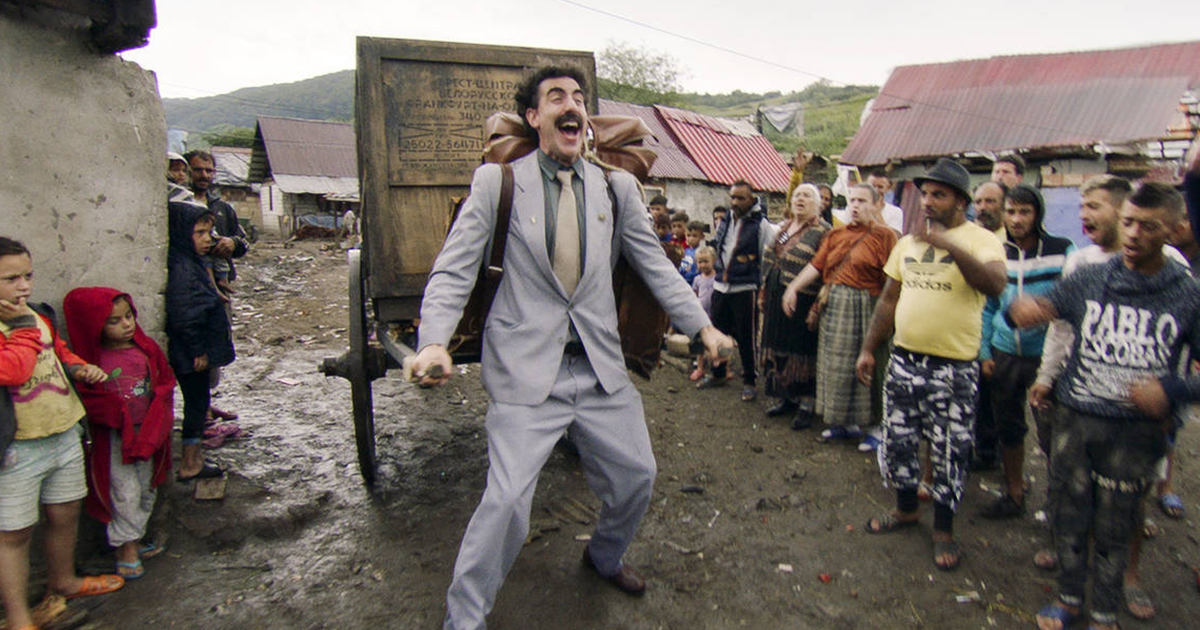 “Jagshemash. My name a Borat.
My wife is nice… Noooot.
But how I end up like this?

…14 year ago I release a movie film which was great success in U S and A.
But, Kazakstan become a laughing stocks around the world.”

As you can tell by the opening lines, Borat has not changed much, even though the world around him has. The film he references is the 2006 mockumentary Borat: Cultural Learnings of America for Make Benefit Glorious Nation of Kazakhstan, which became an instant success, both shocking us and finding humor in exposing America’s prejudice through a series of pranks on ordinary people.

The film was blamed for Kazakhstan’s financial failure and he was sentenced for life to hard labor. Being locked away, Borat had not been exposed to the radical changes in the world both technological and political. Lucky for us we are given the chance to watch as he catches up with the world while casting a light on modern-day U S and A in the hilarious and relevant (and impactful) sequel, the aptly named, Borat Subsequent Moviefilm: Delivery of Prodigious Bribe to American Regime for Make Benefit Once Glorious Nation of Kazakhstan.

For those of you who do not know, Borat is a character played by Sacha Baron Cohen. At this point, you have either heard of the character or you have heard a terrible impression of him. Cohen is a comedian and actor (seen recently in probably his best role yet in The Trial of the Chicago 7) and through his work, also an activist of sorts. Will Cohen match everyone’s taste? Probably not, he is surely considered divisive, even if you can for the most part the love/hate line will match certain party lines. His goal is to entertain and open people’s eyes to the world around us. Sure, that sometimes involves outrageous costumes or a photo of his genitalia, but his work can be effective.

How does it work on his second outing in the age of Trump? First and foremost, it is funny. The so funny you find yourself rewinding to hear the joke you laughed over level funny. The humor is mined from the same sources political satire, the fish-out-of-water humor, taking advantage of unsuspecting folks, plenty of genitalia humor, etc. Some of the novelty has probably worn off some but that does not take much away from the enjoyment. This is mostly in part to the decision to deliver a stronger story this time around. It is not only a competent narrative, it is also surprisingly fulfilling.

The film picks up over a decade after the original. After Borat’s first film disgraced the nation and caused it financial devastation, he is called to the Presidential Palace for a new mission. There he learns about the magnificent new premier of the U S and A, McDonald Trump who has become buddies with tough-guy leaders across the world like Kim Jon Un, Putin, and Kenneth West. In an attempt to earn Trump’s good favor for his homeland, Borat is tasked with delivering a gift to Vice Premier Pence. When things do not go as originally planned, that gift turns out to be his daughter, Tutar (relative newcomer Maria Bakalova). The perfect gift for him knowing he is such a renowned “pussy hound, he could not be left in the room alone with a woman.”

From this point over, Borat Sagdiyev becomes a father-daughter story like no other. For the sake of not spoiling the jokes and your enjoyment, I will keep the details sparse. Like the previous film, their story is told using a mix of scripted scenes and candid moments where they interact with unknowing real-life “characters.” Before Tutar can be delivered to Pence, Borat must transform her into a respectable American woman, including a complete Pygmalion makeover – outfit, hair, etiquette, plastic surgery, etc.

When she inquires about women becoming a journalist the idea is quickly nixed since the last job held by a woman lead to the Titanic sinking. Driving? Well, that led to the Hindenburg crash of course. Oh, the humanity! Both Tutar and Borat take these rules at face value, but as she meets more Americans she begins to realize that women can do all that and more. Even without the hyperbole, the level of sexism on display is quite repulsive. Sure, this film probably will not be part of the curriculum of a women’s rights class, but there are some good messages in there wrapped heavily in satire.

Characteristically, Cohen pulls no punches when it comes to milking a comedy out of a situation. What was surprising is that he ends up being upstaged by his own “daughter.” Bakalova is a joy to watch, delivering laughs of her own while ramping up the humor of Cohen’s jokes. Her portrayal of Tutar is a combination of fierce and innocent. As an actress, she is also fearless, showing the ability to great delivery and comic timing under pressure. One particular scene is almost unbelievable, literally. So much so that my wife (my screening partner) asked me if it was real. Again, I will not spoil it, but I will say it involves a prominent political figure. What transcends here is a testament to Baklova’s nerves of steel to pull it off.

Some of the best moments are the scripted one, especially between the father/daughter duo. Credit goes to Cohen and the others on the film’s massive writing team including Anthony Hines, Peter Baynham, Jena Friedman, Lee Kern, Dan Mazer, Nina Pedrad, Erica Rivinoja, and Dan Swimer. Such a large writing team, it would be interesting to see how the process breaks down. Whatever the approach they somehow found a way connecting scripted humor, impactful candid moment, and an actual plot.

Director Jason Woliner does an impressive job balancing it all, even delivering some real sentiment into the father-daughter relationship. He keeps the narrative loose enough to combine the elements while keeping the viewer curious how it will all come together. And, when it does, it is surprisingly clever and completely satisfying.
When all is said and done the most shocking thing about Borat Subsequent Moviefilm is that it is not shocking. The new normal is more mean-spirited and abhorrent on a daily basis than anything on screen (which I would guess played into the strategic release date). If people are open to it and honest, the film is more than laughs, there are underlying important messages in play. For some, any messages will certainly fall on deaf ears (maybe more accurately, ears with fingers in them). For others, this will be a reminder to not be complacent. Will Borat fix the world? Probably not. But, there are few films that will deliver the laughs trying.