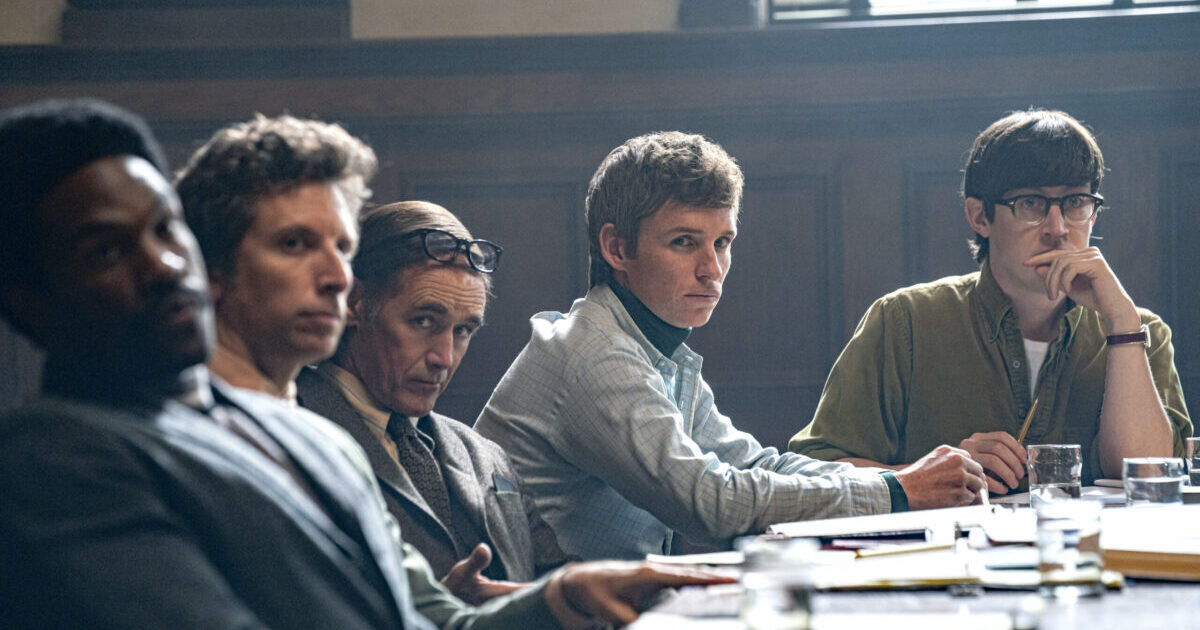 As long as social injustice exists in the world, there will be films that cast a light on it. Unfortunately, such injustice is a universal and evergreen theme. Add Aaron Sorkin‘s The Trial of the Chicago 7 (which he wrote and directed) to the list of films that cover it. The parallels to today’s world make it seem like the perfect film for these turbulent times. But, if you go back and watch other films about rights being trampled, the theme serves as a cinematic skeleton key that resonates in just about any era – from the latest injustices, those that preceded them, and likely those that are destined to follow for many years to come. These films are simultaneously timely and timeless

The Trial of the Chicago 7 is no exception. Its ‘little guy(s) versus the system’ tale torn from the history books certainly feels important and relevant right now, and probably will for decades to come. The good news for the viewer is that while serving as a reminder to be alert and resilient, it is also an arresting courtroom drama that entertains while it inspires.

For those, like me, who do not know the story behind the story, the film is based on actual anti-war activists who were charged with conspiracy crossing state lines with the intention to insight a riot during the Democratic National Convention of 1968. The problem is there was never such a conspiracy or intentions. In actuality, the anti-Vietnam protests had unarmed protestors peacefully facing off against armed and heavily geared police officers. No matter the intentions it often feels like playing with matches near a powder keg. The film opens with archival footage, similar to Spike Lee‘s approach used for Da 5 Bloods earlier this year, setting the stage of what was the 60’s, violence, war, racism, and assassinations, all juxtaposed against some funky upbeat music. It all transitions seamlessly into the introduction to the eight men put on trial. This sequence is the first of many where it is impossible to ignore how the editing really shines.

The men on trial come from all walks of life, including two leaders of Students for a Democratic Society, a kind of nerdy pacifist Rennie Davis (Alex Sharp), and the temperate idealist Tom Hayden (Eddie Redmayne). A father and literal Boy Scout leader, David Dellinger (John Carroll Lynch) who wants to set a good example for his family through non-violent protests. On the opposite end of the spectrum are the two members of Youth International Party (Yippies) a pair of free-spirited, quip-dropping stoners who live to challenge authority, Abbie Hoffman (Sascha Baron Cohen) and Jerry Rubin (a very scruffy Jeremy Strong). Rounding out the Chicago 7 are John Froines (Danny Flaherty) and Lee Weiner (Noah Robbins) who really have no clue why they are being charged. Finally, there is an eighth man on trial, a Black Panther named Bobby Seale (Yahya Abdul-Mateen II) who is treated in such despicable ways both legally and humanely it really makes you question our legal system.

The accused is such a hodgepodge mix of characters that just based on their backgrounds it alone casts doubt as to how they could possibly conspire together when their paths in life simply would not cross. Remember, this is the 60s, not the present day where you can connect with anyone across the globe from anywhere anytime. Communication was not that simple. That hiccup is not an issue for Nixon’s new Attorney General John Mitchell (a fierce and determined John Doman) who will use the full power of the Justice Department (ironic name) to make an example of these men, no matter right or wrong.

Sorkin keeps things moving incisively, not wasting a second as he sets the stage, establishing all the major players, and placing at the beginning moments of the trial. Once the parts are in place, wound up, and set in motion the clockwork starts ticking and does not stop. A procedural at its core, it strives to be more. We are taken beyond the courtroom, to the private backroom meeting, into the streets where passions flow on the front lines of protests, jettisoned across place and time, providing an array of different perspectives on the volatile scene of the alleged crime. An array of brush strokes are blended to fill the canvas while masterfully intertwining the stories of several characters. It is a lot to take in, and the lack of any viewer disorientation is a testament to the craftsmanship on display here. Expect to see the film pop up a lot during awards season both above and below the line.

Even when using actual courtroom dialogue pulled from hundreds of hours of testimony, Sorkin composes the screenplay so that lines wrap around and flow into the next. Stylishly and effectively connecting a couple of dozen characters – some speaking at length others only a line or two – into one fluid chorus of dialogue. Sorkin’s screenplay is simply rhythmic. It is complemented by the sharp and eloquent editing of Alan Baumgarten who flawlessly cuts from character to character, quickly transferring us back and forth in time. High notes are hit to punctuate the key moments while also contemplatively embrace the lulls, avoiding wearing out the welcome of the flashier moment. It is as sleek of a marriage of dialogue and editing as you’ll find on screen this year.

With such an extensive cast, it is admirable how Sorkin balances the weight of their performances Redmanye is tense, focused, and grounded, while not being showy. Cohen keeps us off-balance every time he is on screen delivering laughs (working his great chemistry with the equally quirky Strong) while never letting us lose focus on the weight of the situation. He delivers some of the funniest and most reverberating lines of the film. Mark Rylance is a chameleon disappearing into the role of lawyer William Kunstler, giving a strong enough performance to let us look past unsightly hair.

Other performances to watch for among this impressive ensemble are Michael Keaton, Caitlin Fitzgerald, and Yahya Abdul-Mateen II all of whom deserved additional screen time. While I also loved every line delivered by Frank Langella as the judge, his villainous traits were too on the surface. Having him wear a black cowboy hat may have been more subtle. At heart, this is an actor’s film with too many quality performances to cover here.

The film never quite reaching the dramatic, heart-pumping highs of Sorkin’s A Few Good Men. It remains more a little more restrained even when injecting touches of humor throughout. Still, it finds numerous times that strike the emotional drum, providing chills and lump in the throat moments. The only thing that pulled me out of its spell was is an awkward and ill-placed fade to black that still has me scratching my head. Also, the accents are a bit suspect (to be completely honest they may also be spot on, I just don’t know). Most flaws are minor and are easy to overlook as we are caught up by the captivating human drama and the brilliantly kinetic editing.

While the film is inspiring, I could not help but feel disheartened thinking about how some people will interpret it differently. I see as a moving fight against the oppressive powers, a thought-provoking and enlightening film that introduces new ideologies or reinforces fundamental beliefs. But, in today’s divided times, I can only expect some folks will watch it and instantly go on the defensive. Feeling attacked, as if that a film is taking shots at their political beliefs or favorite politician (or non-politician), will provide them the excuse they need to ignore the messages presented to them. For those people, I have to propose, if by pointing out the injustices of the remind you of the person you support, then maybe you should question who or what you support.

The Trial of the Chicago 7 is now streaming exclusively on Netflix. 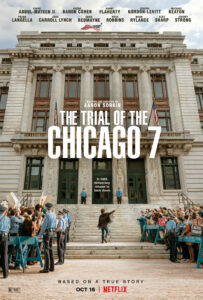 ‘The Trial of the Chicago 7’ is a captivating courtroom drama with brilliant kinetic editing and performances across the board.