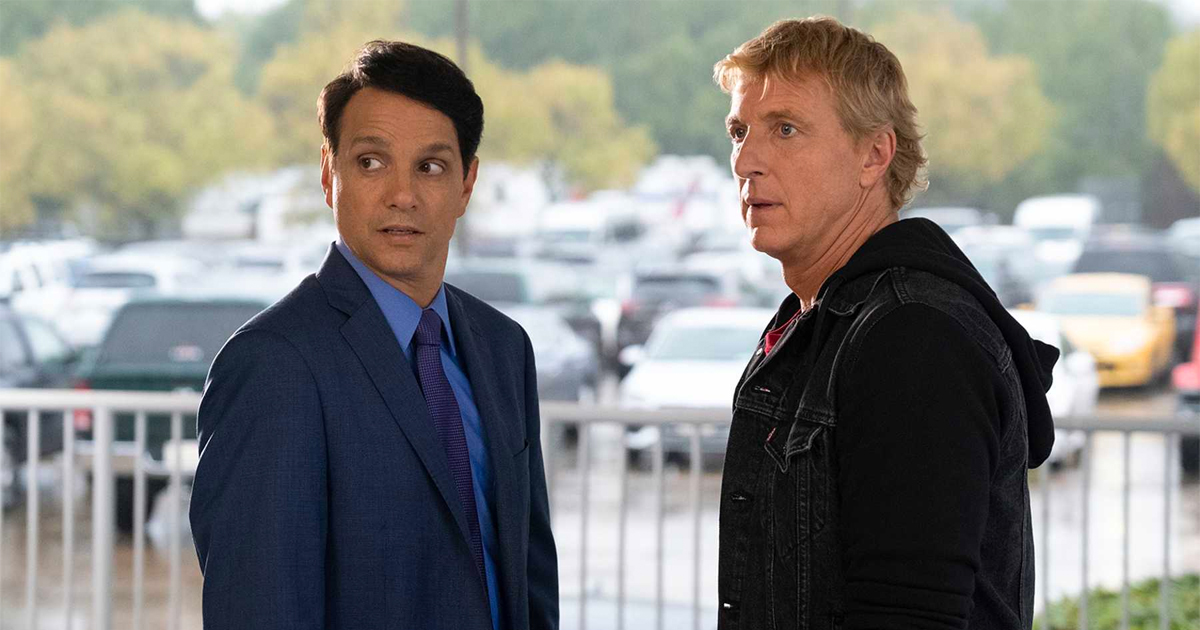 Season Three of Netflix’s Cobra Kai has dropped, so we’re taking a look at the hit Netflix series.

The series Cobra Kai is a love letter to the Karate Kid films. The show started on YouTube Red, and despite its appeal, and high quality, it was not enough to make the premium Youtube product viable, and they have failed to be a player in the premium stream-i-verse. The show, however, has transcended Red Tube, err, Youtube Red, and landed at the much more viewer-friendly platform of Netflix, with a new 3rd season dropping Jan 1st.

If you haven’t seen the Karate Kid films, do yourself a favor and seek out the first two. They are the foundation of all of the characters, back story and themes of Cobra Kai, and what a strong foundation it is. They use the martial art of Karate as an analog for morality, as it can be wielded for good or evil. The lesser Karate Kid 3, and another 2 sort-of-reboots were generated over the years, but they don’t hold a candle to the first two films. The Cobra Kai series pulls heavily from these two films and fleshes out a surprising amount of character stories that were barely noted in the films.

The first two seasons of Cobra Kai came out on YouTube Red and failed to carry the service, despite its quality and popularity amongst fans. Now they are on Netflix, and the highly anticipated third season just dropped! Season one picked up the characters from Karate Kid in modern-day, and we see how their lives turned out, and what happens to reignite the Karate fueled the rivalry between Daniel Larusso (Ralph Macchio) and Johnny Lawrence (Robert Mark Kamen) thirty years down the road. They do an incredible job at capturing the essence of these characters and giving them rich, believable and interesting lives that contrast each other beautifully.

While the show centers around the rivalry of the two flawed students turned Senseis of the Cobra Kai Dojo and the Miyagi Do Dojo, the real themes are betrayal, classism, regret, redemption, and balance. There are a lot of smaller plots that follow the Larusso and Lawrence families, mostly their high school-aged kids. Of course, these kids wind up caught in the Karate fever that is a given, but they all have intertwining plots that keep the drama as high as the action. There are very few, if any, episodes that don’t include a fight of some kind. Another major source of unseen-feels comes from the absence of Mr. Miyagi, Daniels Sensei, Mentor and Life Coach. Mr. Miyagi was played beautifully by Noriyuki “Pat” Morita, who sadly died in 2005.
If you just jump into season three, you’ll likely be pretty confused, as the story is linear, and draws heavily on the audience knowing the films, and the first two seasons. As it was such a beloved franchise, I think they take this for granted, but just in case, they include lots of footage from the films in some very well used reinforcement. Some of them I had no problem recalling, but others, well, it’s been 30 years!

Another thing the second and third seasons do really well is to reward involved viewers. There have been a lot of Cobra Kai and old Karate Kid fan theories, and the shows writers embrace that and throw in  a lot of little easter eggs and story elements as responses to all of the insights. It is not only a good show, but it’s a fun show that appreciates its fans and rewards them for being them.

There are plenty of good things to enjoy about the Cobra Kai show that, for me, outweigh the shortcomings, of which there are some. Daniel’s son is a wasted character that they haven’t done anything with. Some of the stories have very convenient setups and or resolutions, and plenty of the karate scenes are contrived, almost to porn plot levels. The stunts are serviceable, but don’t go crazy like you would see in a Tony Ja film, so rabid fight film fans will be disappointed. The sprinkles of levity are sometimes cringey (though sometimes glorious), especially when they highlight Johnny’s out of touch 80s ignorance. (“Put one of those hashbrowns on it, like hashbrown Cobra Kai, and send it to the internet!”) For me, the thin plots, sometimes clunky pace, and luke-warm fighting don’t take away from the excellent character work, and really amazing heart that the show has.

Is Cobra Kai a nostalgia bomb? Absolutely, but they don’t let you blindly fall into that trap. The modernization of the story takes it all into account, and does a good job of knowing exactly what it is, and not trying to trick you. If you haven’t seen the films, go watch them, they are true classics. Then go binge all three seasons of Cobra Kai, it’s worth it.