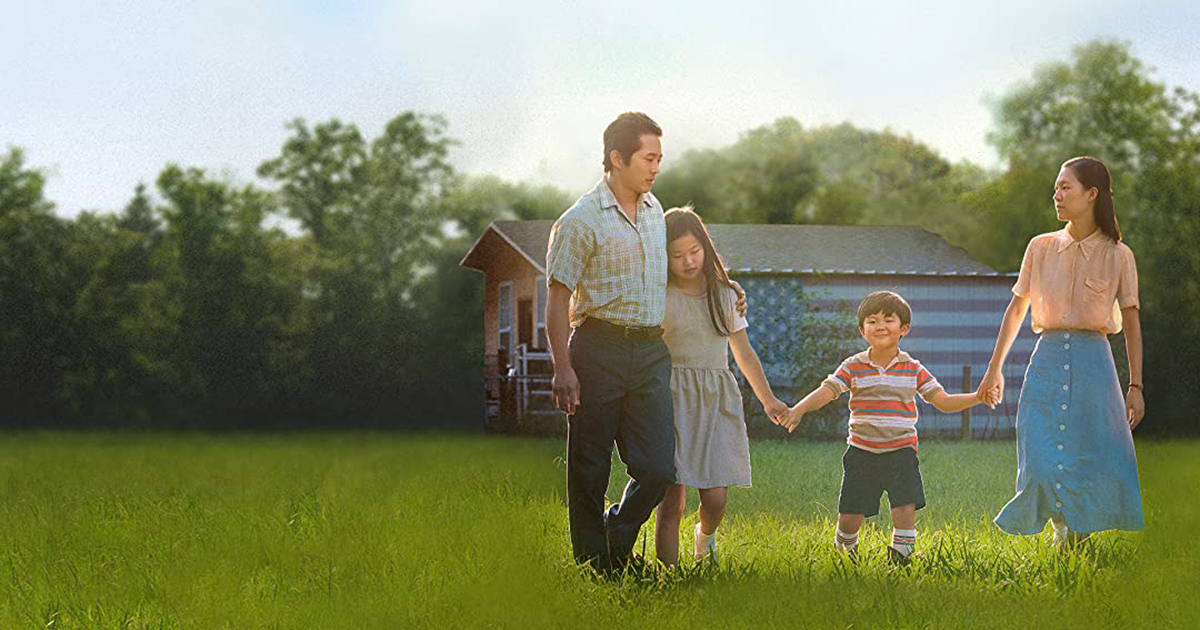 There’s something very special about Minari. While watching it took hold of me, keeping me absorbed right through to the credits as if I were watching my own family story on screen. Still, it is difficult to pinpoint exactly what works so well. On paper it does not sound like much, but the elements together make for a magical experience.

Lee Isaac Chung‘s work is poetic while not being the least bit ostentatious. Many aspects of it ring true and possess a sincerity that you very rarely find in a film. That is surely part of its allure. It doesn’t contain blockbuster names nor flashy performances, what they are is nuanced and true. The score possesses a gentle warmth and subtle complexity that enhances the emotion of every scene. And, while often taking place in less than ideal setting like a run down mobile home and a chicken processing plant, cinematographer Lachlan Milne mines beauty from the least likely of places. It all connected with me and should do so too for audiences who are willing to open their hearts and minds.

The screenplay, written by Chung, is a semi-autobiographical story set in the 1980’s about a Korean American family in pursuit of, you guessed it, the American Dream. The father, Jacob Yi, (Steven Yeun) moves his family from California to rural Arkansas to a plot of land he hopes to convert into a flourishing working farm even though he has little experience doing so. His wife, Monica (Han Ye-ri), does not have faith in his decisions especially when seeing their new house, a leaky mobile home on wheels. Monica’s top priority is taking their son David (an absolutely adorable, Alan Kim) who has a heart condition and their resolute daughter, Anne (Noel Kate Cho). While Jacob sees the farm as their future, she sees it as their potential demise.

The story is a very personal tale of perseverance and family challenges based on memories of Chung’s life. He gives us access to it all the ups and (mostly) downs he recalled growing up in his household; health issues, tornado warnings, working day and night, a lack of irrigation for the crops, and your standard marital squabbles over money, are just some of them. It is a glimpse into the struggles of a family trying to rise above their given path but who seem destine to be devoured by their dreams. 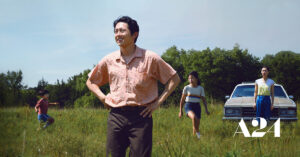 Things take a refreshing change in tone when the kids’ grandmother, Soonja (Youn Yuh-Jung) comes to stay with them. To say she is a breath of fresh air is an understatement – she teaches the kids to gamble, has a foul-mouth and has little interest in the family rules. In addition to the levity, she also brings with her the weight of the past. She’s a constant reminder that failure now would be failing all those ancestors before them.

Minari is comprises universal themes with a fresh perspective. It is an immigrant story –and that’s something that cannot and should not be ignored. With that said, I am going to ignore it. That aspect works incredibly well and should be appreciated and discussed, but there is even more to explore. Briefly touching upon the immigrant story aspect would only be a disservice. Like many of my favorite films, Minari takes us to places/situations we are not typically exposed to and taps into a vein pulsing with humanity. It is an immigrant story but at its core it is really a human story. Our differences define us, but it is our similarities beneath that ignite the empathy that connects us. Minari takes a very unique and personal story and makes it all of our story.

The performances are are spectacular with a profound authenticity throughout. The simple looks between Yeun and Han convey more about the trials their relationship than any dialogue could ever do. As they battle over what is right for the family or as they offer a helping hand to the other when down, it just feels natural. So much so, that if you told me they were married in real life I would not only question it, it’d explain their chemistry.

Speaking of chemistry, that between Kim and Youn is so perfect and sweet, it gives me joy just writing about it. They are the comedy duo we did not know we needed. If you do not walk away loving those performances, don’t call a doctor, call a mortician, you are dead inside. Cho’s work as Anne is does not garner as much attention, but she too is spot on. Then there’s veteran actor, Will Patton as the religious (how do I say this gently) nut who delivers a wild performance that reminds us that no matter how different or similar people are, we all have our own cross to bear. In terms of quality of performances this is the cast of the year.

Let’s get back to that score. To be totally transparent, I have a difficult time even listening to it – in the most complimentary way possible. I react to it in a way I have never done to any musical piece* preceding it. Just listening to Emile Mosseri‘s score (‘Big Country‘ specifically) has brought me to tears. It strikes up so much emotion and truth. The delicate strings and piano notes that seem to reveal the souls of the characters. Then there’s the uses of human voices, humming or chanting that is evokes feelings of the generations of ancestors who preceded them (and us) watching our struggles as we pursue our dreams and carry on theirs. It is almost haunting at time, serving like a character of its own.

Chung has composed a series of small strokes that resonate fiercely. And, while Minari is in no short supply of adversity but it is also quite hopeful and even very funny (mainly thanks to Youn, Kim, and Mountain Dew). I have only touched upon a selection of what I loved about the film. It possesses so much originality and depth that deserves to be experienced in its raw form, unspoiled by wordy critics. Simply, one if the best films of the year.

*(For the record, two other songs actually have brought me to tears. This is the first not connected to major moments in my life. The first is ‘Falling Slowly’ from the film Once.  It played in the hospital room at the moment my eldest daughter was born. The other a church hymn, ‘I Am the Bread of Life’ – a song that has been sung at every family funeral service I have ever attended. The funny thing is, as I type this I realize that, while they seem random, there is a connection between the three – family. Maybe those tears are not so random.)

Minari is available on VOD digital services and in select theaters.

Minari possesses originality and depth. It deserves to be experienced in raw form, unspoiled by wordy critics. Simply, one if the best films of the year.