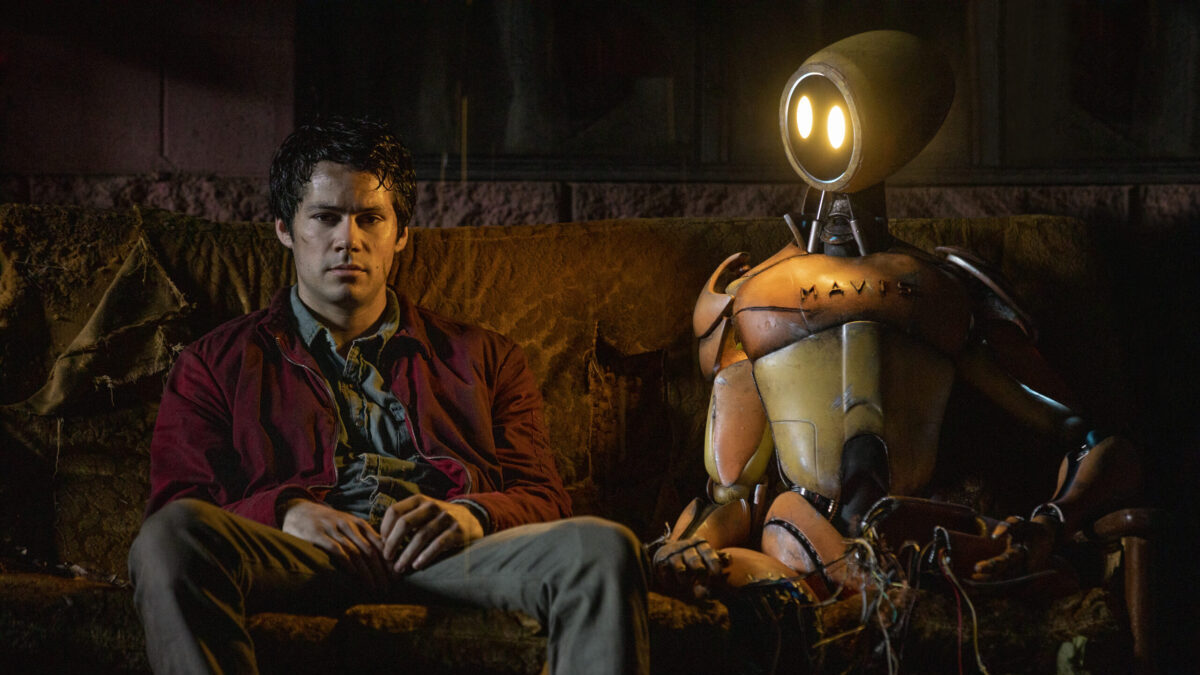 Like many films that have been released recently, it is hard not to make connections between the on-screen situations of Love and Monsters and the current isolation nightmare which we all share. Mankind hiding from “bugs” forcing us into isolation had a whole different meaning just a few months ago, but now they feel like the perfect metaphor. As with most post-apocalyptic film, Love and Monsters begins with the end… the end of most of humanity and the loss of life as we know it, that is. The difference with this film is what we find in place of the loss – a refreshing sweetness. Maybe that is why Paramount Pictures pushed the film forward on their slate from January 2021 to now – to provide some light escapism when we most need it.

When we meet our hero, Joel Dawson (Dylan O’Brien – Teen Wolf, Maze Runner) he is among about a dozen humans living in one of the colonies, subterranean bunkers spread across the country where the survivors hide. We are caught up to speed about the fate of humanity through an inventive hand-drawn animated version of Joel’s journal sketches come to life, accompanied by his spirited and amusing voice-over that sets the tone for the film. It is one of many nice touches by Michael Matthews (Five Fingers For Marseilles), who does admirable work with only his second outing as a director.

As Joel explains, the world is in the middle of the ‘Monsterpocalypse’ a catastrophic event brought on by mankind’s actions (of course).  In an attempt to stop a massive asteroid hurtling toward earth, humans did what they do best, they shot a bunch of rockets at it. The results of their actions saved earth… oh yeah, and doomed humanity at the same time. The chemical compounds from the missiles polluted the earth turning cold-blooded beings into massive, mutated, man-eating monsters. Ants, bees, lizards, goldfish were suddenly transformed into gigantic creatures of doom, turning mankind into a moving feast. In about a year the monsters wiped out 95% of the human population.

Where does the titular “Love” fit in? Just as the earth went to hell, Joel and his high school sweetheart Aimee (a delightfully strong Jessica Henwick – Iron Fist) were separated, and as they were he promised to find her again. After seven years of searching, Joel was able to track down her location just 85-miles away, a distance that feels more like a million miles when in between them contains an endless supply of killer beasts. Ignoring advice he sets off on a journey to keep his promise, where he must face demons, both personal and the monstrous people-eating kind. Maybe not the brightest of ideas for a kid who freezes in the presence of the giant bugs.

The film is a bit of a genre mashup, throwing a little of everything at the screen – thrills, humor, and heart. It is the post-apocalyptic coming-of-age adventure that you didn’t know you needed, complete with a boy and his dog moments. After a lengthy setup, the quest really hits its stride when he crosses paths with a pair of survivors, Clyde (Michael Rooker) and Minnow (Ariana Greenblatt). Clyde is 100% classic Rooker, a combination of rough around the edges loner with a hint of inner tenderness. Greenblatt’s Minnow steals scenes as the wise beyond her years 8-year-old chop-buster, who is equal parts adorable and tough. Her big brother/little sister chemistry with O’Brien feels natural and leads to some of the film’s most touching moments.

The pair provide Dylan with a rule by rule breakdown of survival life above ground, which will certainly have your Zombieland sense tingling. Even so, it is still entertaining to watch Minnow and Clyde teach him everything from weapons training to evading predators from tracking you by following the “Not Both” Rule – choosing between “a hot meal or a good night’s sleep. Not both.”  The trio makes most of their time together on screen and had me wishing to sit with them a little bit longer.

O’Brien impresses, carrying the film with ease in all situations; while sharing the screen, alone, with his dog, or even a robot. Writers Brian Duffield (Insurgent) and Matthew Robinson (Dora and the Lost City of Gold) use voice-over based on Joel’s notes to Aimee is a clever approach. It injects levity while allowing us to learn more about Joel even when he’s traveling alone. What’s revealed are true-hearted intentions that could come across hokey, but O’Brien sells them, making him a hero you want to root.

Let’s not forget the monsters. If you are squeamish around bugs, this may not be the film for you. Matthews wisely avoids the distracting CGI overload found in many films – no loads of computer-generated slime or over complex modeling. By showing restraint, we treated to creatures that are incredibly well designed and realistic, yet kind of simple by today’s standards. Creepy and cool but not grotesque and messy. And since Matthews also uses them sparingly they never wear out their welcome. So those looking for wall to wall CGI creature battles you may be disappointed. Not me.

As odd as it is to say it, the eerie settings are rather lush and beautiful. Cinematographer Lachlan Milne squeezes the most out of the Queensland, Australia location. Somehow he makes abandoned amusement parks, worn-down neighborhoods, and sweeping landscapes, even when covered with the decaying monster carcasses, look stunning through a palette of bold and lively colors.

Several scenes that give off a throwback video game feel that works, keeping things light and moving briskly, throwing a crowbar in the gears of any well-intentioned messaging. Overall the film is a little all over the place, neither the gory horror film you may expect nor the straight-up laugh up loud comedy that would seem like a natural fit with a title such as Love and Monsters. While that could have sunk the efforts here, there’s enough cohesion to hold things together. As for the film’s science, you’ll have a much better time if you don’t overthink it.

This is film isn’t a game-changer, while quite imaginative, much of it will feel kind of familiar and comfortable in an appealing way. What really makes Love and Monsters stand out is the optimistic spirit throughout – an especially welcome trait in these cynical times. Even as the final act looks like it could go off the rails, Matthews steers it back by latching onto the film’s human elements. When all is said and done, it is not the monsters that are the draw here – it is love that leads the way.

Love and Monsters is a mashup coming-of-age adventure that avoids the obvious genre pitfalls.