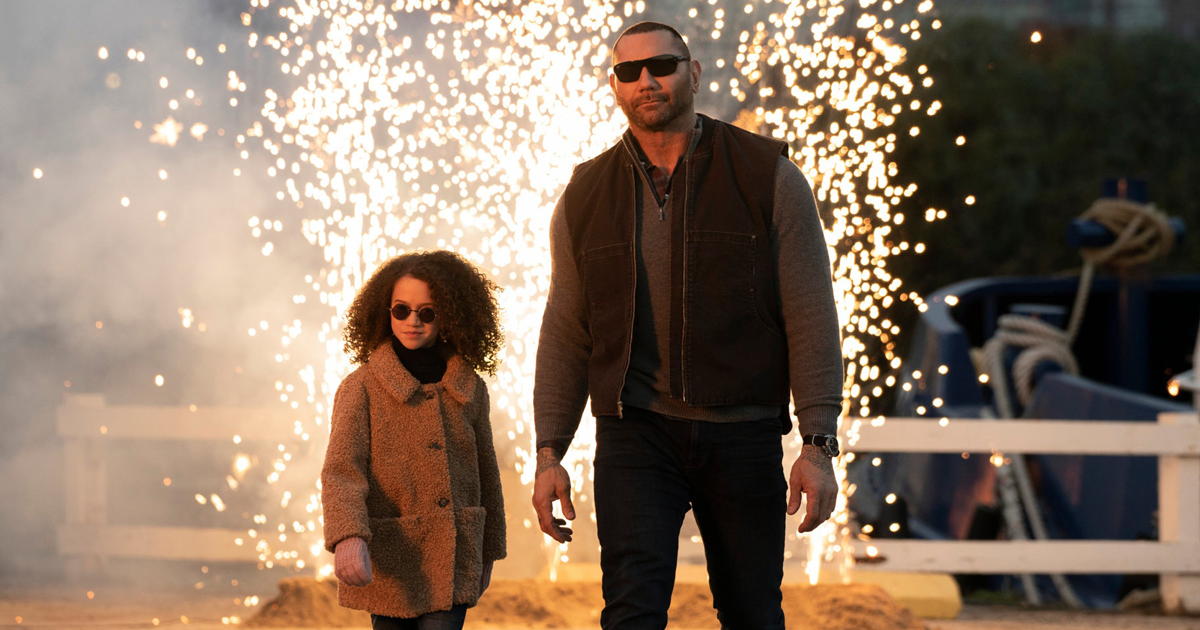 You pretty much know what you are getting from “My Spy” just by viewing the poster. The tough guy with a good heart who is outmatched by a precocious little kid film has been done before… many times before. It seems that just about every year Hollywood delivers us a similar film with varying results. Hulk Hogan, Vin Diesel, Burt Reynolds, Dwayne “The Rock” Johnson and John Cena have all played that tough guy. Now you can add to that list David Bautista.

In “My Spy,” Bautista plays JJ, a former US Special Forces who, after making a mess of his latest mission, is pulled from the field. To keep him in check, his boss David Kim (Ken Jeong) assigns the less risky task of surveilling Kate (Parisa Fitz-Henley), the sister-in-law of a most-wanted arms dealer. When her daughter, Sophie (Chloe Coleman) discovers JJ and his partner Bobbi’s (the always funny Kristen Schaal) hidden cameras planted in her apartment, she tracks down their base and records them on her phone. She blackmails them, threatening to reveal their identities, unless they meet her demands. She want to learn ho to be a spy and more importantly someone to hang out with while her mom is working.

This leads to loads of fish-out-of-water moments with JJ, the rough around the edges trained killer, spending time with the adorable and crafty Chloe. At the same time, JJ starts falling for her mother, Kate, the person he is supposed to be surveilling. Although much of we get here is straight out of the movie cliché handbook, the film still musters some generally sweet and funny moments. Watching this massive hulk of a man meet the demands of a harmless 9-year old is just silly enough to be fun. The mutually beneficial relationship gives Chloe the father figure she so badly needs while softening the JJ’s heart. Their bond grows as he protects her from bullies, takes her ice skating, teaches her how to beat a lie detector, and to perform the perfect slow-motion, no-look walk away from an explosion. All this and more as Chloes does her best to encourage JJ and her mom, Kate, to fall for each other romantically.

Jon & Erich Hoeber’s script works best during some of the softer moments between JJ/Kate and JJ/Sophie. The human connections between them seem legit it’s the spy portions that feel lazy. The premise alone is a puzzler. How a spy who was able to take down a dozen Russian arms dealers with his bare hands is unable to snatch a cellphone away from fourth-grader is a head-scratcher. The film is full of these moments that require you to turn your brain off for optimal enjoyment.

While watching you may wonder who director, Peter Segal’s target audience is it walks the line between kids movie and one for younger teens, but never chooses one. It is a mix of experiences a kid can relate to mashed up with a somewhat violent (yet goofy) spy thriller. The opening scene alone is full of gunfire, explosions, and even a decapitation. Although shot for laughs, it still does not feel like an appropriate fit in a film starring a 9-year old who is struggling to fit in at school. In addition to the violence, there are plenty of swear words tossed around. Nothing too strong, but again, a little much for the younger crowd. It feels like a studio decision to try to cast a wider net in an attempt to attract both younger and older kids. Instead, it feels like a disservice to both.

The film’s strength of the film is the generally authentic feeling chemistry between Coleman and Bautista. The relatively unknown Coleman does more than hold her own with Bautista. Her spunk and natural delivery is something most kid actors typically lack. She provides the emotion where needed and has adequate comic skills to deliver some laughs. Her sweet but sassy plays well against the rough around the edges Bautista who seems willing to do whatever it takes to make this film work. He has a massive, intimidating presence which when juxtaposed against his lighter side such as his appreciation of teeny-bopper music, love for his pet fish name Blueberry, and his tearing up the dance floor with some no-awful moves fun to watch. His sheer size in comparison to the surrounding actors is alone used to garnish some chuckles. Bautista’s charisma doesn’t reach the sky-high levels of The Rock-type levels, but what he displays here is sufficient enough for this film. He strikes a different tone which may make him the ideal co-star for a future The Rock film.

“My Spy” doesn’t aim very high and hits its target most of the time. It is the ideal film to watch with the family on a slow evening. Parents should be entertained enough while kids of the right age will probably get a kick out of it. It is the type of film that will have you smiling, providing a couple of laughs along the way. Never hitting the grating tone of some of its predecessors. You could definitely do worse. I pinky promise.

My Spy is rated PG-13 and is streaming exclusively on Amazon Prime Video.

While “My Spy” doesn’t bring much new to the kid spy genre, the leads are great, sneaking in enough entertainment value to be worth the watch.